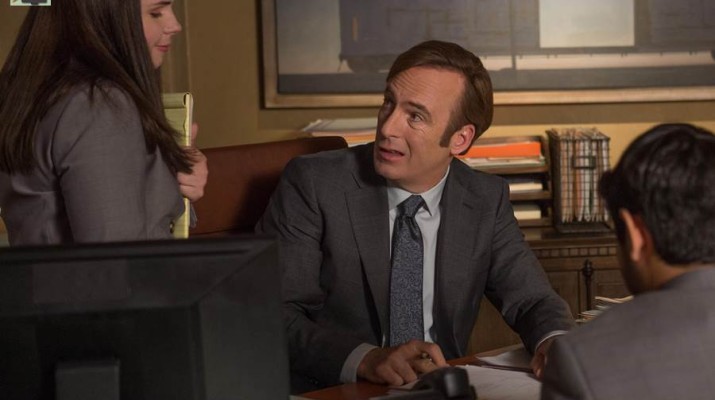 What can I say about “Better Call Saul’s” Jonathan Banks? Without him on board for this show, I would still watch and be entertained. But damn does his character take the show to a whole new level. He’s grown so much since his 80’s days back on “Wiseguy,” which was another ahead of its time tv show on CBS.

Right now I’m more interested in his story than Jimmy’s. Soon enough their story lines will intersect, and both will be going down the same road with the same dangerous people, though.

Jimmy is not long for his spot on the Davis and Main roster. Either he’s going to snap because of Erin breathing down his neck, or the boring ass commercial the firm is running instead of his will send him over the edge.

He can only find solace in the dirty trenches. He has to visit his old office at the salon just to get some sleep.

Of course, the salon owner is startled to find him there and asks, “Did you lose that job already?” Not a lot of faith in our boy Jimmy.

Kim is being wooed by Jimmy’s poor singing on her answering machine. She won’t talk to him, but clearly he is breaking through.

To hammer the point about Jimmy’s new job not being a fit for who he is, we see him struggle once again with the mug Kim gave him. It does not fit in his new ride. Not gonna work!

It was good to see Kim buck on Howard. She’s out of the basement, but her boss will barely speak to her or look at her. So she ignores his orders to miss lunch and heads out for a drink. While at the bar she is hit on by a guy clearly looking to cheat on his wife. Kim uses the chance to run a scam on the guy with Jimmy.

Would Mike be able to turn down Hector’s offer to help out Tuco by saying the gun was Mike’s? He did turn it down initially to the messenger sent by the dangerous cartel member.

Hector wasn’t going to just go away, and Mike knew it. So he set up a welcome mat with carbon paper under it to alert him if anyone came back with more messages. They did return, and he dealt with the two thugs sent back in by Hector.

Mike used another half measure. When he should have capped the guys hiding in his closet, he merely beat them down with his pistol. Breaking bad gets messy as we all know. And Mike’s turn to criminal work has him washing the blood off his hands in the sink. 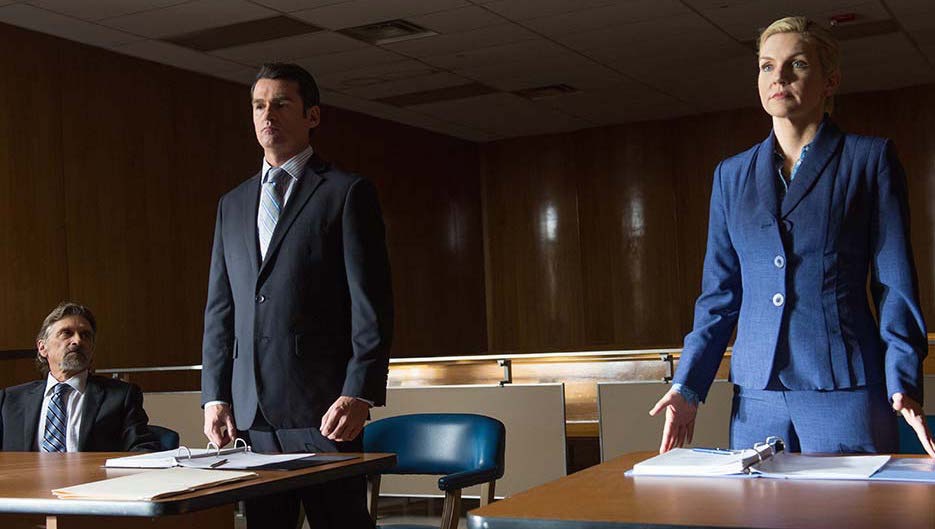 Before Kim and Jimmy worked their slick magic on Dale, the engineer, Kim was in court to oppose a motion by Sandpiper. She lost but put up a nasty fight to the end. That effort was noticed by Sandpiper’s lead counsel, Rick Schweikart, who asked her to lunch. She was offered a job by the guy and said his firm would even pay off her student debt to HHM.

This is probably both an effort to hurt HHM and a real offer to a talented lawyer who works her ass off. Schweikart connected to Kim with his story of being left alone early in his career by his bosses in a tough case.

Kim and Jimmy ended up together again for the night after swindling Dale for $10,000. The check is a trophy only since Kim would never really scam someone for that kind of money.

I’m betting she stays at HHM, even though Jimmy thinks it’s a no-brainer to leave the place that doesn’t appreciate her.

They head off to work, and we see what Jimmy does best. He breaks things.

The coffee mug won’t fit, so he takes a tire iron to the cup holder. He thinks he can make him, and Kim fit, along with his steady paying new career. 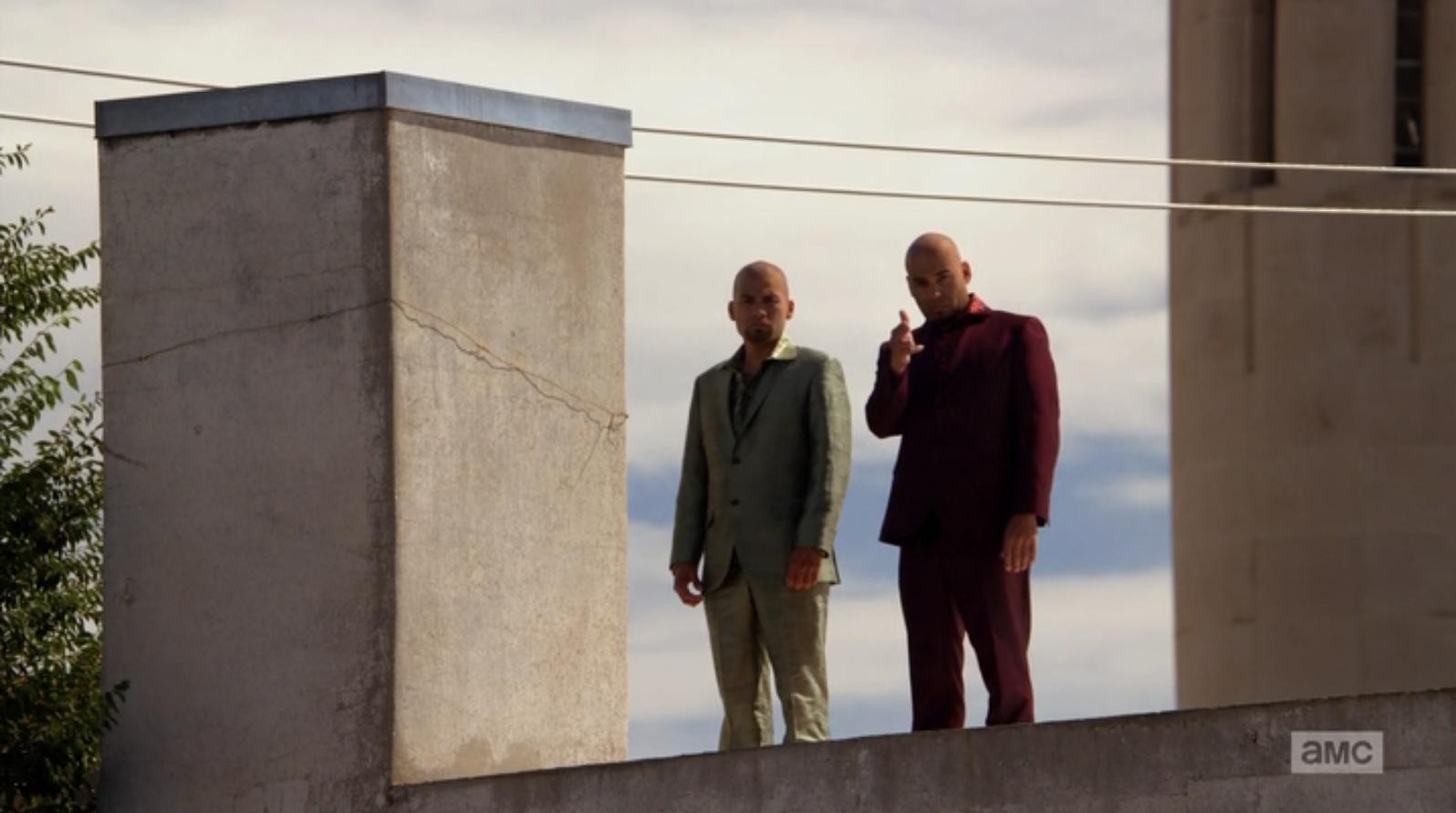 Well, they have emerged as a threat to Mike and his granddaughter since the other two thugs did such a poor job of scaring Mike. They are the nephews of Hector and only need to point to Kaylee from afar to let Mike know things have escalated.

Mike’s efforts to help his son’s family has given them much needed money but put them in real danger.

The message was loud and clear from the cousins, so Mike has no choice but visit Hector. There’s no begging to leave his family alone. No bargaining. Mike walks in and threatens to kill Hector right at the table with all his henchmen around. Mike has the balls to request $50,000 to change his gun story, which Hector says is no longer an option.

After seeing Mike really is willing to die in order to kill him, he compliments Mike on his giant testicles and approves the payoff.

Nacho is the one to deliver the money to Mike. And being an honorable guy, the former cop hands over half the money to Nacho since he has failed to deliver fully on his promise to get rid of Tuco.

Turns out Nacho’s idea off sniping Tuco would have been better in retrospect.

The previews for the upcoming episode looks to show Saul coming out of the womb, with lots of flare.

I’m real anxious to see Jimmy operating with no need to act like someone he’s not. It’s coming….