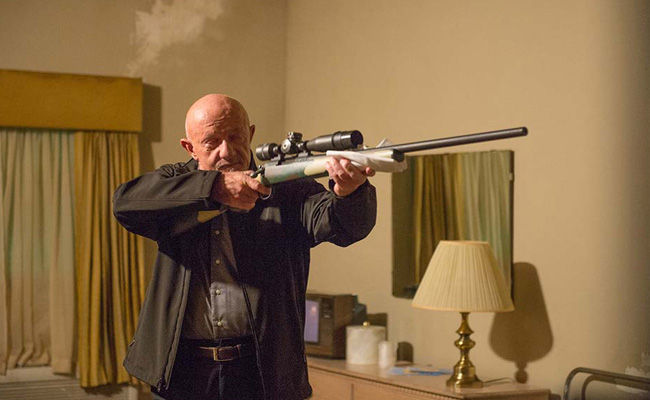 “Better Call Saul‘s” Gloves Off was one of those episodes that makes you crazy. I love Jimmy, but he thinks he can just smooth over any problems he creates. Saying sorry over and over again can’t erase some things, and other people get hurt in the process, as Kim found out.

What we know after this week’s show:

– Mike is one tough SOB.

– Tuco loves his car and is a complete lunatic.

– Kim is likely to end up managing a Cinnabon as a result of being connected to Jimmy.

The show opened with a flash forward showing Mike beaten to a pulp as he grabs a beer from his fridge. He’s holding onto a set of boxing glove pendants. It’s clear he just got done doing the job Nacho mentioned last week as he has an envelope full of cash.

What about Jimmy? I’m sure the partners at Davis and Main apologized to him for getting upset over his little TV commercial, right?

Wrong! Far from it. They were super pissed at Jimmy for jeopardizing the firm’s image that they have carefully crafted over the course of many years.

It didn’t matter that the ad was a hit. All that mattered was Jimmy not being a team player and going over their heads. I can see how they would be mad. Big businesses like their firm don’t want anything detracting from the branding they have put out for public consumption.

The Sandpiper case is not what keeps the lights on at Davis and Main as one partner put it to Jimmy.

Kim also gets a taste of some punishment from her boss as Howard admonishes her for not letting him know about the commercial initially. To be fair, Kim thought the ad had been approved. She had no idea this would end up embarrassing Howard and his firm.

She doesn’t tell them Jimmy basically lied about having approval from his boss Cliff.

Well, who was it that Nacho wanted whacked? Tuco. His own partner. I can see why. Tuco could snap at any time in a drug-induced rage and kill Nacho.

Mike finds lots of holes in Nacho’s plan, so he figures it best to go Lee Harvey Oswald on the drug dealer. Mike starts shopping around for a decent rifle to do the job.

Lucky for Kim she isn’t fired. She does get pushed down to the bowels of HHM though and has to do menial tasks. All because of Jimmy. Having his lady hurt by his blatant disregard for the rules should be a wake-up call to Jimmy.

But the fact is, he just can’t help himself.

Is it wrong that I hope Chuck dies pretty soon from his whacky condition? I just hate the way the guy looks all smug….all the time. Amazingly Jimmy still caters to his sick brother despite all that’s been done.

Chuck claims it wasn’t he who forced Kim into the basement. That was Howard’s doing he says. Jimmy tries to bargain his way to getting Kim back in her regular spot. He even offers to quit being a lawyer. The “impeccable” Chuck can’t be bribed, though. Not even by the thought of his unworthy brother getting out of the lawyer biz.

Why did Mike decide to back out on killing Tuco? Too much risk. He tells Nacho he has a better way to get his partner out of the picture.

That plan gets put in motion while Tuco and Nacho are getting paid at the Mexican diner. Mike reports a fight there involving a gun. He then bumps into Tuco’s car as he drives up to the diner.

Mike acts like an innocent old man on Social Security when he’s threatened by the gangster. Tuco does get him to offer to cover the damage, but this thug isn’t into filing insurance claims. Instead, he prefers the cash Mike flashed while paying for his tacos.

The beat down started once Mike refused to pay up and Nacho was sent away by Tuco (pretty convenient). The tough old guy smacked the gun from Tuco’s hand and held onto him as the nutcase hit Mike with right hand after right hand.

A ticket to prison for 5-10 years was punched when Tuco hit Mike one last time with the cops as witnesses. Mike made sure of the last punch when he asked Tuco, “That all you got?” Great line by a grizzled veteran cop.

What Mike lacks in physical prowess, he makes up for with savvy, patience, and straight grit.

Mike earned a nice day’s pay of $25K for getting his face turned to ground chuck. Half the amount offered to kill Tuco.

Nacho couldn’t understand all the trouble to avoid pulling the trigger. Yet if killing Tuco was such a simple thing, Nacho wouldn’t have had to sub the work out in the first place.

Mike will feel the effects of the boxing match he never fought back in for a while, but it was less risky than killing a man.

Amazingly, I could see a spin-off series centered around Mike. And he and Saul aren’t the only ones around which a series could be created. A real credit to Breaking Bad.