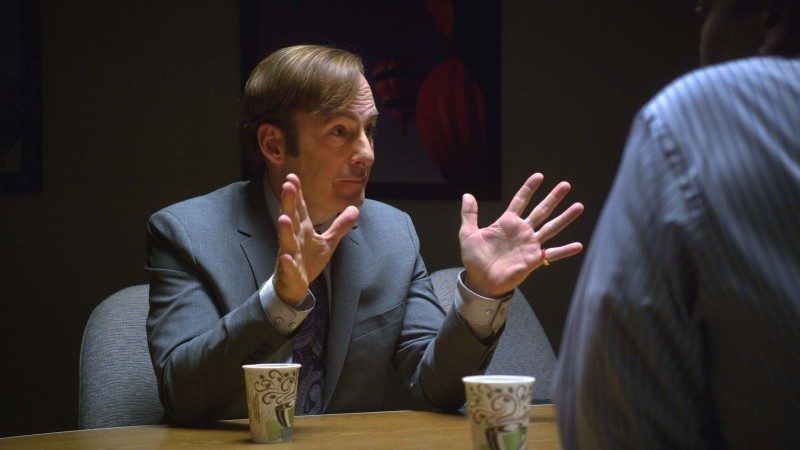 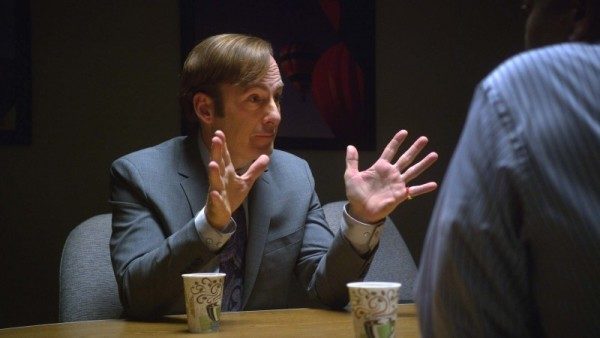 Better Call Saul hit on all chords in the second episode of 2016.

– Super nerd Pryce is becoming one of my favorite idiots.

– Chuck made me remember how much I hate him and wish he’d get fried by a malfunctioning flip phone.

– Jimmy fabricating a lie to get Pryce off the hook, along with avoiding any legal trouble for Mike, was brilliantly freakish.

In the open we see Howard bringing supplies to Chuck and Howard gives the piano playing bastard an update on Jimmy. Chuck is none too pleased to hear that his brother is on the partner track at Davis and Main.

Chuck is a miserable individual who deserves to sit in the dark alone with no electricity.

Jimmy and Kim continue their romance as the firm goes over details of the Sandpiper case, with Kim playing footsie with our boy Jimmy at the conference table. They later discuss a fantasy life of horse riding and grilling on a weekly basis at his new place.

A bad omen shows up though when her gift in the form of a coffee mug won’t fit the cup holder of his new Mercedes Benz.

Pryce’s voice is pretty annoying but strangely entertaining. Him telling Mike about his stolen baseball cards was priceless. Mike has to undo the damage the nerd has done by involving the cops in the theft.

We see Jimmy try to help Cliff, the leader at Davis and Main, with some helpful info on the Sandpiper case. Cliff seems glad for the tip but doesn’t make a note of it so maybe Jimmy is just there to appease the old folks involved in the case since they all love him. 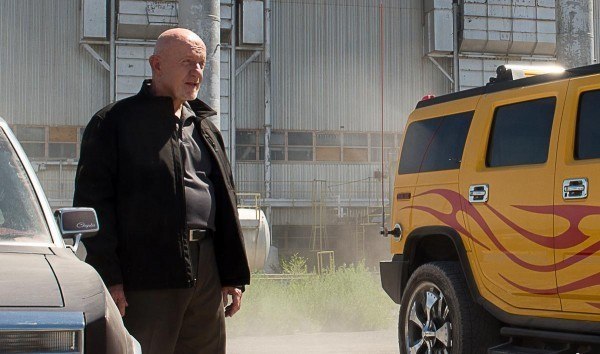 Mike turns lemons to lemonade. Or if you prefer, he turns a Hummer into a thousand untraceable parts for the returned baseball cards and $10K for himself. Nacho agrees to give the cards back and the cash to Mike in exchange for the Hummer, which will not be washed and waxed weekly as Pryce recommends to the drug dealer. It will be chopped, and Nacho makes it clear to the card collector that “their business is concluded.”

Mike made the deal happen by threatening Nacho with informing his boss Tuco about his side biz.

Another meeting at Kim’s firm and, this time, Jimmy gets rattled when Chuck shows up. I felt bad in season one when Chuck had to have all phones removed before entering this building with his name on it. After he turned on Jimmy, I now see him as weak and pathetic.

Mike asked Jimmy for help with Pryce since the cops were looking into him and were hoping he would slip up and tell on himself for any illegal activities. Jimmy spun a wild tale of a freaky relationship between Pryce and a wealthy guy who liked to watch the nerd in “Squat Cobbler” videos.

Please do not Google that term!

This involved Pryce sitting on pies, which explained the covey hole at his home seen by the cops that investigated the theft. Jimmy told them it was a privacy issue, not anything illegal.

Pryce is weird enough to make all this plausible.

The cops eventually buy this story and simple as that, Pryce is out from under the microscope of Johnny Law. He does have to make a video so the cops can see for themselves. A small price to pay to be out of danger of being thrown in jail.

Jimmy and Kim laugh it up over the story while eating some of the leftover pie from the fetish video shoot. Kim’s amusement doesn’t last long when she concludes Jimmy fabricated evidence by making the video.

She tells him he could be disbarred for such acts and warns him not to tell her about any of this stuff in the future.

Jimmy didn’t have to even get involved with Mike and Pryce in this little caper. He’s sitting pretty at Davis and Main, yet chose to help an obvious criminal. This goes back to his flipping the forbidden light switch last week in his new office.

There was no need or benefit in breaking the rule last week. Same goes for this week when he could have told Mike he didn’t have time to fool with this case. But Jimmy’s nature is to break the rules.

He’s more than the “Slippin Jimmy,” that Chuck believes him to be. At the same time, there is something inside him that won’t let him conform.

Whatever “that” is, will eventually cost him his relationship with Kim, and obviously leads to him managing a Cinnabon eventually.