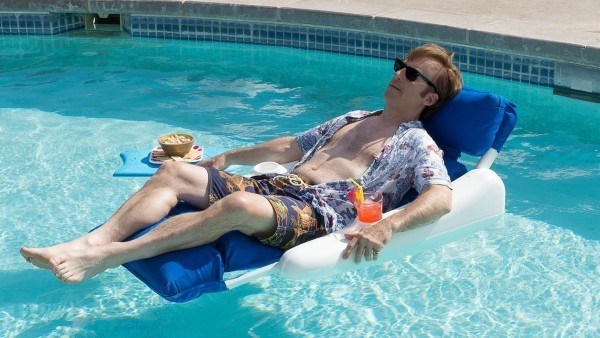 When we last saw our “Better Call Saul” boy Jimmy McGill, he was getting over the betrayal of his brother who thought the law was too good for the likes of his little brother Jimmy.

Season two opened with a scene from the present showing Saul Goodman (Jimmy of course) getting stuck in the dumpster room at the mall where he’s managing a Cinnabon‘s. He is afraid to open the emergency door to escape since he fears being recognized by the police. Not likely, but the guy has went to a lot of trouble to change his identity.

– Mike’s advice should be followed…..always.

– Jimmy’s cons are always clever and a fun watch.

– Getting everything he wants in life isn’t enough for Jimmy.

The show opens with a reminder of the offer Jimmy has from another law firm that’s helping with the Sandpiper case. Our protagonist ends up turning down the offer when it looks like it won’t help or hurt him with Kim.

Jimmy got a cool response from her when he point blank asked her about their relationship moving forward.

He’s a bit disappointed, of course, and starts to devolve into a mid life crisis or as he called it, “mid life clarity.” Jimmy scams his way into a little resort complete with a nice pool and a floating bowl of chips and dip.

A real classy addition to the place is Jimmy.

I guess he’s willing to hang out in the pool all day regretting not taking the duffel bag full of cash he and Mike had their hands on from the city embezzlers in season one.

Mike is still working for the pill dealing geek off the street, Pryce. That contract ends when the nerdy drug wholesaler rolls up in a Hummer 2.0 complete with flames and spinning rims. For those who don’t remember these wheels that trended over ten years ago, they were basically a ticket to have your car searched by the police and to let others in society know you’re a dumb-ass.

Mike isn’t down with drawing attention to himself, so he quits the gig, but warns Pryce not to go to the meetup with Nacho alone. The “PLAYUH” IT worker knows it all and ignores the advice of course, and then ends up having his cash stolen from his home and apparently some valuable baseball cards.

Nacho took advantage of him by taking a peek at his address on his Hummer registration.

The police know something’s up when they see the hide-away behind Pryce’s couch. He’s likely to a client of Jimmy’s very soon.

Kim tries to talk some sense into Jimmy but ends up part of his world for a bit. Jimmy gets her involved in scamming a loud little stock peddler. The couple gets a nice meal and a bottle full of $50 per shot Tequila with the stunt, which Kim thoroughly enjoys and ends up in bed with Jimmy.

Free Tequila is an awesome aphrodisiac.

The day after their little romp, Kim has to go back to the real world of lawyer work. Jimmy thinks about hitting another easy mark he sees at the pool, but ends up calling Davis & Main to accept the job offer after all.

Giving up the law would have been really dumb. Jimmy had put in a ton of work to get his law degree. Not to mention he’s one hell of a smart lawyer.

When Jimmy arrives at his new firm, he’s treated like a king. His reputation as the guy who found the gold mine Sandpiper case precedes him as he’s introduced to the staff.

Jimmy has made it.

He is the man. He’s at a very nice firm. Dude is being catered to for his every need, down to a choice of artwork for his office.

He’s come a long way from Slippin Jimmy, even though he is still the same con man. He’s just went up in competition.

But something’s not quite right. Jimmy likes his office; even requests a different type desk that’s quickly ordered by his assistant.

Jimmy then sees a light switch on the wall with a label warning that it’s not to be turned off. No apparent reason. Just the warning. McGill can’t stand the thought of a stupid rule, so he flips it off. Nothing happens as it appears not to be connected to anything.

I thought maybe it could be a test from the firm to see if the guy can be trusted to go with the flow. Maybe that’s the case, and Jimmy gets fired next week. I’ve heard of companies with ridiculous tricks like this to weed out people who aren’t going to fit in with their culture.

More likely the switch just represents Jimmy’s inability to conform to a set of rules. He has been doing things against the law for so long; it’s in his very nature.

This second season may show Jimmy struggling to fit in at Davis and Main, which leads him to go out on his own again.

This opening episode was good, but it didn’t pack a big punch.

Don’t get it twisted, though. Vince Gilligan knows how to set up a series, episode by episode without rushing anything. So look for a more impactful episode two.