Let’s face it, everyone who walks through the door of a casino has a dream of winning big. There’s something satisfying and exciting about the little guy getting one over the multi-million-dollar casino, and that’s why we’re all rooting for each other when we go there. If you see someone emptying a slot machine or taking the blackjack dealer for a ride in Las Vegas, then you’ll hear plenty of shouting and clapping as everyone enjoys a small victory against the house.

It’s no surprise that Hollywood has tapped into the idea of an underdog claiming an unlikely victory. Whether it’s a genuine win that comes after a series of nail-biting moments, or a more underhanded way of taking some cash, there are many protagonists who’ve struck the jackpot in iconic movie scenes.

But how have these guys managed to win, and can their success teach us how to strike it lucky in the real world? Here we run through a few of the most epic casino wins in Hollywood movies, and see if they can guide us to greatness. 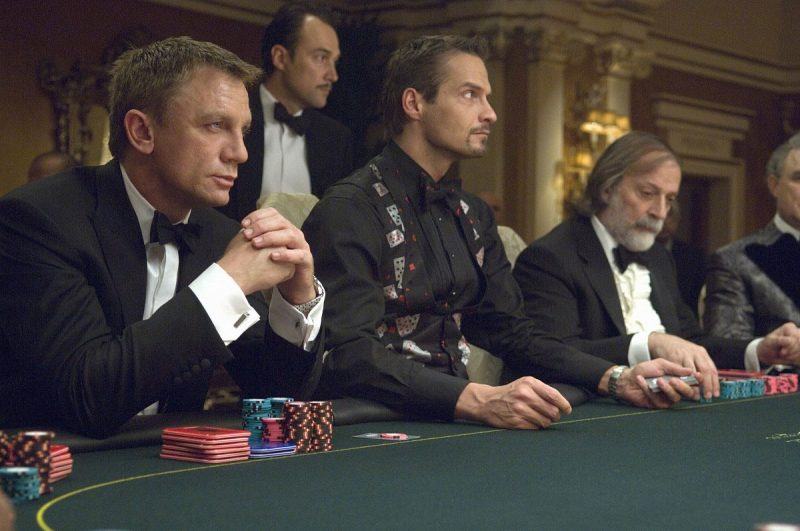 OK, so we’re going to kick off with a movie that doesn’t necessarily show the casino losing out. Instead it’s Le Chiffre, an evil arch-criminal who profits off fixing the world’s stock markets, who’s on the receiving end. Our hero James Bond, played in this film by Daniel Craig in the brilliant reboot of the franchise, is tasked with taking some dirty money off Le Chiffre at a major poker tournament – but it doesn’t exactly go smoothly.

As well as facing off against the better poker player, several goons and henchmen try their best to poison, shoot and stab James during comfort breaks – something we imagine happens quite a lot at the World Series of Poker. After an intense few hours, James and Le Chiffre face off in the final hand, with it looking like the bad guy could end up taking the Mi6 buy-in fee as well as the rest of the pot. Of course, James managed to pull a straight flush out of absolutely nowhere, giving Le Chiffre something to really cry about.

But he didn’t exactly let on that he had the golden hand, with an expert poker face bluffing others into going all-in. 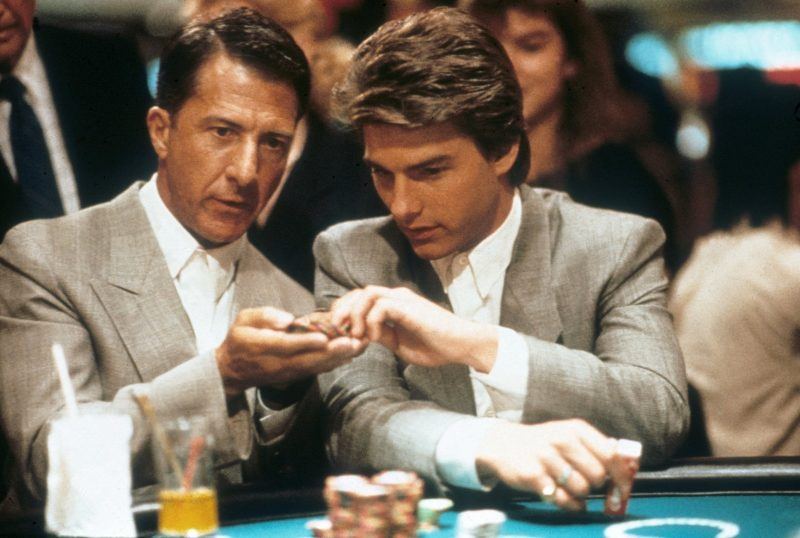 Charlie Babbit is a wheeler-dealer who’ll do anything for cash. He finds out that his deceased father has left his entire fortune to a brother he didn’t know about – Raymond, who is an autistic savant. After trying to get the money off his brother underhandedly, Charlie eventually realizes that Raymond’s exceptional memory and recall skills can be put to use in a scheme to make money after a road trip where they get to know each other.

In a Las Vegas casino, Raymond is put to work counting cards to cover off an $80,000 debt run up by Charlie. Despite Raymond’s objections, the pair eventually sit down for a game of blackjack. Raymond counts cards – a practice that’s severely frowned upon and banned in many casinos – and manages to avoid scrutiny from security over the fact that it’s virtually impossible to count cards from a six-deck shoe. Despite this, they manage to win enough money to cover the debts before they are asked to leave.

The casino scene in Rain Man may seem like a hair-brained scheme that takes advantage of a person with disabilities, but it’s actually very satisfying to watch Raymond work his magic, and it’s actually a really refreshing moment in the movie.

If Charlie and Raymond had been playing in the 21st century – rather than in the 1980s – they might well have tried to pit their wits at an online casino instead of a land-based one. This is because of the vastly improved experience gamblers can now find online. With exhilarating features such lifelike gameplay and themed slots that give out huge jackpots – the main benefit is that gamblers can play anytime, anywhere. Whether it’s blackjack, poker or roulette players enjoy most; they now don’t have to leave the comfort of their own home to enjoy their favorite games. These brilliant features ensure players return for more of the action at online casinos such as 888casino.

Lesson learned: while it’s not permitted in many casinos, card-counting can work in blackjack 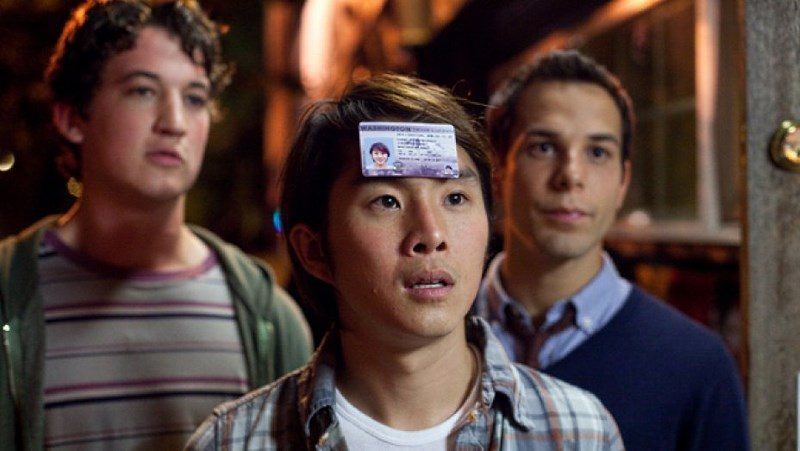 This movie from 2008 that starred Kevin Spacey before his fall from grace is made even better by the fact that the events actually took place in real life. The MIT blackjack team was a real collection of genius students who managed to take plenty of money off Las Vegas casinos throughout the 1970s, 80s and 90s by counting cards.

The story revolves around maths student Ben Campbell being collared by Professor Micky Rosa, who recruits him after Ben manages to solve a complex piece of arithmetic. Ben is then sent to Las Vegas with other team members who count cards using their superior maths skills and signal to other players to win big.

However, they soon get caught out by the security chief Cole Williams, and eventually they’re chased out of town, but not before Ben loses $200,000 by gambling instead of counting. He has to cut a deal with Rosa, who demands he is paid back. Ben agrees to one more night Vegas, and tries to win the money back. However, they are soon caught and flee, with Rosa taking the $640,000 in chips, leaving Ben with nothing. The great first twist is that the chips turn out to be fakes, and the limousine is being driven by the casino owner, who has a grudge with Rosa, with Ben setting up a trap to get out of trouble. The double twist is that Ben’s friends had been card counting all night too, so they still managed to walk away with plenty of cash. The ending to this film makes up for the otherwise slow pacing, but it’s still a good movie with plenty of casino action and a decent cast. 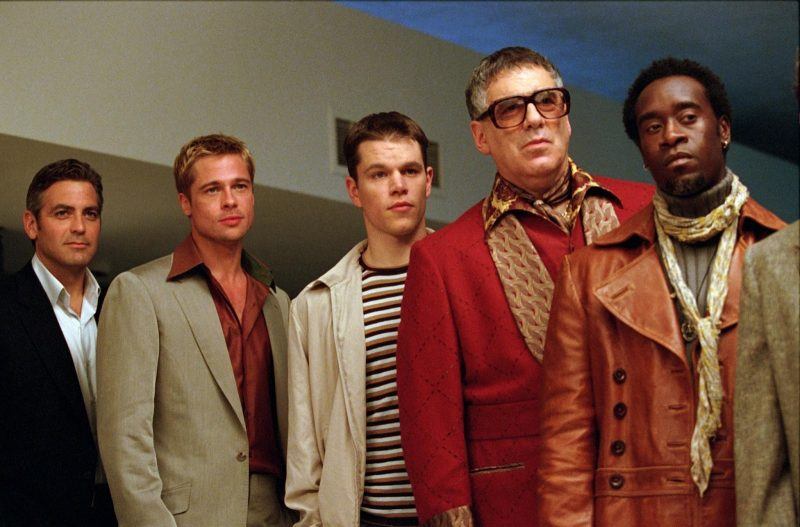 A true homage to Las Vegas, Stephen Soderbergh’s all-star cast isn’t really about using gambling skills to get one over on the casino’s owners – but go for straight-up robbery in order to line their pockets. Danny Ocean (played by George Clooney), fresh out of prison, catches up with partner-in-crime Rusty Ryan (Brad Pitt), before heading to Las Vegas to plan the heist of the century with old friend and former casino owner Reuben Tishkoff.

The audacious idea involves robbing the Bellagio, Mirage and MGM Grand casinos at the same time, all owned by Terry Benedict, played by the brilliant Andy Garcia. The plan goes ahead after some near misses, and a few clever twists and turns, including hijacking security footage to make it look like the robbery is taking place when it really isn’t, and using an acrobat to avoid vault security systems.

The star-studded cast really makes this movie work, and there are loads of air-punch moments. Garcia is a real villain, and when the gang manages to make off with his cash, it’s a satisfying piece of cinema. It spawned two sequels, and there’s also an exciting all-female spin-off on its way, with Ocean’s 8 hitting screens later this year.

Lesson learned: if all else fails, organize a heist

Hopefully, these movies will give you some inspiration for your next trip to the casino, but we’d definitely recommend sticking to the rules when you’re plotting your way to the jackpot.