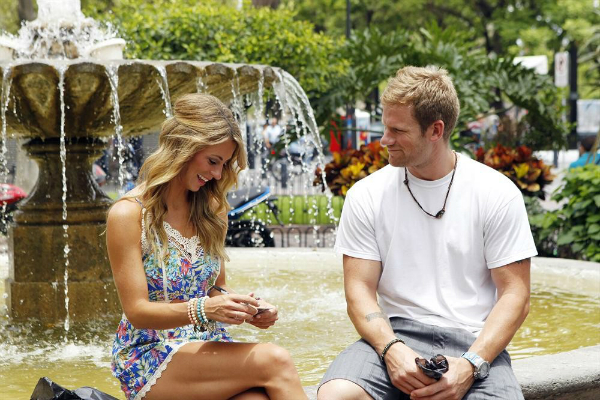 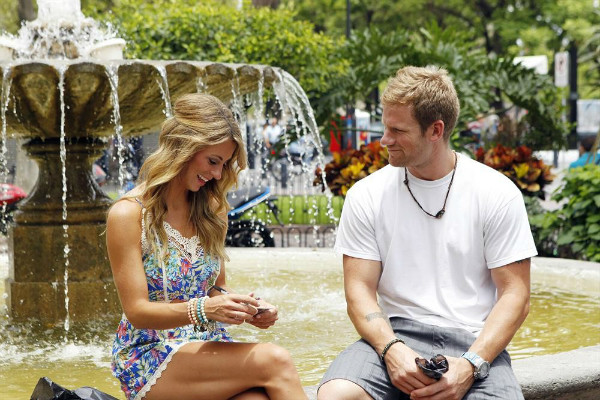 ,The finale of season 2 of Bachelor in Paradise has arrived, and the episode jumps right in from where we left off Sunday night. Basically everybody is in total shock that Kirk and Carly ended things. Especially Jade, who expresses how taken aback she is and begins doubting her relationship with Tanner as she thought Carly and Kirk were the “only sure thing in Paradise.”

While Tanner is also in shock, he is hopeful that the breakup won’t impact his relationship with Jade. He says to the one-on-one camera, “[Jade] could either feel sad for Carly but stay excited for me – or she could let this breakup get inside her head a little bit.”

Meanwhile, Cassandra is also questioning her new relationship with Justin. Cassandra was the last one to come to Paradise (she arrived yesterday), so she is feeling anxious about the possibility of sharing a fantasy suite with Justin already.

Nick and Samantha on the other hand seem to have overcome the fact that they only started getting romantic with each other about a week ago. They go on to reassure each other that is okay for them to move this quickly since they had chatted for about 3 months before coming on the show (Note: I am not sure if Nick is totally aware that she did the exact same thing with Joe). After Nick and Samantha go on their last romantic one-on-one date, they end up agreeing to a night together in the fantasy suite.

Justin and Cassandra also go on a romantic date and everything goes just as well as every other date on this show. However, when they begin talking about the possibility of going to the fantasy suite, Cassandra claims it would be “inappropriate” considering they have only known each other for about 2 days. It is clear that Justin is disappointed, but respects Cassandra’s decision to forgo the suite.

In the meantime, Tenley begins pondering what life outside of Paradise would be like with Joshua. She is nervous as the two live in different states and therefore would have a hard time seeing each other once the show ended. However, she decides to “give it a chance” and joins Joshua in the fantasy suite following their date.

Lastly, is the last true power couple left, Tanner and Jade. As Jade continues to express her concern for their relationship following the whole Kirk-Carly debacle, Tanner decides its time to take things between them to the next level. He sits Jade down and tells her, “Over the last week things have gotten more real for me. And I love you, Jade. 100 perce.t It’s crazy to think about because my mind is saying, ‘What the hell are you doing, Tanner? You haven’t known this person that long.’ But my heart is telling me that the feelings are real and I do love you.” Jade’s worries seem to slip away as she tells Tanner she loves him too. Of course, the two go off to a fantasy suite as well.

After all the couples except Cassandra and Justin return from the fantasy suite the next day, host Chris Harrison announces that it is time for the final rose ceremony. However, he says that the roses are no longer just a means of staying in Paradise another week, they now signify the couples’ commitment to each other outside of Paradise.

In contrast to the usual ceremony, the final roses are given out one-on-one. It begins with Justin and Cassandra. Justin offers his rose to Cassandra, explaining that although their relationship is “new” he still wants the chance to explore it. Surprisingly, Cassandra accepts and says, “I’m excited to go on some great dates, just us, without cameras.”

Next up is Samantha and Nick. Their part of the ceremony basically entails Nick saying she is beautiful a dozen different times. Nick offers her his rose, and after she tells him he is her “prince charming,” she accepts.

After 2 successful rose exchanges it is time for Joshua and Tenley. The two had been together for most of the season, however Tenley has continued to express concern regarding their potential as a couple outside of the show. Joshua offers his rose to her, explaining that he is okay with their future being an unknown and that he is willing to give it a shot. Unfortunately, Tenley does not feel as hopeful about their “unknown future” and doesn’t think that the long-distance thing will end up working. Thus, she thanks Joshua for giving her faith that she will find a kind and caring man but ultimately rejects his rose.

Last up is Tanner and Jade, who have been together since the very beginning of Bachelor in Paradise. Tanner jumps in right away telling Jade he has never met “anybody who makes [him] feel the way [he] feels with [her.]”

Then in attempt to add drama, Tanner tells Jade “I can’t give you this rose today.” However, the fact that Jade doesn’t burst in to tears immediately leads me to believe she knew what was coming: a proposal!

As Tanner gets down on one knee, he tells Jade “What we have is worth so much more than a rose – than a million roses – I love you Jade, and I want to keep on loving you for the rest of my life.” Inevitably, Jade says yes to the proposal.

That is the end of Bachelor in Paradise until next summer. You won’t be able to get your fix of Bachelor drama and Chris Harrison until the new season of The Bachelor which features Kaitlyn Bristowe’s Ben H!

During the aftershow, it was revealed that Cassandra and Justin are no longer together. However, Cassandra is now dating Jonathan, who was on Bachelor in Paradise before Cassandra arrived. In addition, Nick and Samantha are apparently still going strong and Jade and Tanner remain happily engaged.