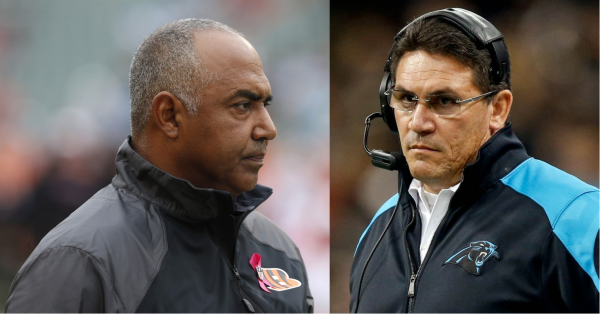 In the NFL, making the playoffs only gets you so far. It’s all about wins. If you don’t win, fans, owners, and the front office will start to get upset, and when you’re the head coach, keeping them happy is the difference between having a job and…well, having to find another one.

Marvin Lewis and Ron Rivera are on the verge of that position heading into 2015. Both coaches led their teams to the playoffs in 2014, but neither made it past the Divisional Round.

For Rivera, his Carolina Panthers actually won their Wild Card weekend game, but even that couldn’t make up for the 7-8-1 record that got them into the postseason thanks to a terrible showing by the NFC South as a whole.

Rivera has been in and out of the hot seat over the past several seasons, but he saved face in 2013 with a solid division championship. Well, once again, if you don’t win in the playoffs, the regular season success will only keep your job secure for so long.

Marvin Lewis is the perfect example of this. His Cincinnati Bengals have made the playoffs each of the four seasons with six total appearances since 2003, when he took over a struggling team which hadn’t qualified for extra football since 1991.

Despite taking the Bengals from an Oakland Raiders-level franchise to a legitimate competitor, his job isn’t safe anymore.

Personally, I have a hard time blaming Lewis for Andy Dalton’s shortcomings, but if the Bengals lose another playoff game (or fail epically and don’t even make the postseason), Marvin is gone.

Bengals owner Mike Brown made his intentions pretty clear by only renewing Lewis’ contract for only one season through 2015. This is Lewis’ last shot to save face and keep his job. Another early exit will leave the Bengals looking for someone who can actually win come January.

You’d be better off trying to find some way out of that ridiculous contract y’all gave Dalton, Mr. Brown.