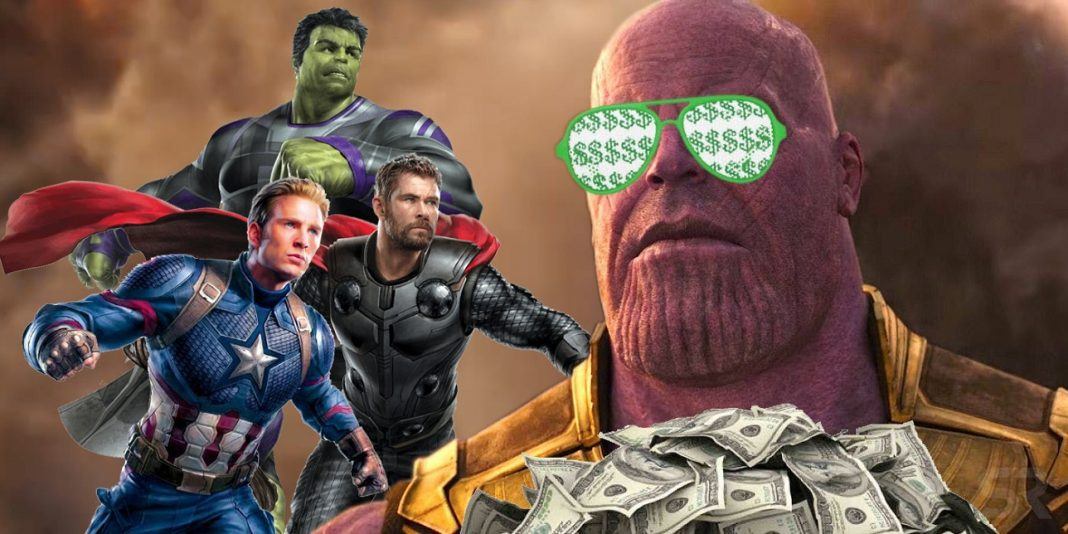 Marvel‘s “Avengers: Endgame” will easily break box office records, and bookies around the globe have already been setting odds just on this (You can see these just further down). It already passed the $100 million mark in China when it opened Wednesday, but crossing that $300 million mark here in the United States will be a true “Mission: Impossible” task.

“Avengers: Endgame” is guaranteed to be a movie-theater event unlike any other. For the past week, fans have been live streaming Marvel Movie Marathons watching each of the films in order leading up to the final one in the saga.

When the 22nd film in Marvel Studios’ saga opens in North American theaters on Thursday night, it will land on more screens than any movie ever has in U.S. and Canadian theaters. And the 4,600 theaters the Walt Disney Co. has lined up may still not even be able to keep up with demand.

“It looks like we’ve gotten Thanos’ snap,” AMC said at the time.

Just how massive the ticket sales will be by the end of Sunday has been one of the one of the industry’s favorite guessing games. Can it clear $300 million domestically? Is a $1 billion worldwide weekend possible? Will “Avengers: Endgame” eventually rival the $2.8 billion total gross of “Avatar” in 2009?

Regardless, records will fall — and they have already started to. Disney said Wednesday that “Avengers: Endgame” grossed about $107.2 million in China on Wednesday, where it first opened. That’s already the most lucrative single day ever in Chinese theaters. Only “Star Wars: The Force Awakens” had a larger single day gross, and its one-day $119.1 million haul came from both U.S. and Canada theaters.

“This is a seismic box-office event,” said Paul Dergarabedian, senior media analyst for Comscore. “This is like the 100-year-flood of movies.”

The current opening weekend record is held by the last “Avengers” movie — the 2018 preamble to “Endgame,” ″Infinity War.” It debuted with $257.7 million domestically and $640.5 million worldwide.

Both of those records are likely toast. The worldwide haul is certain to be obliterated that because “Infinity War” didn’t debut in China until two weeks later. “Endgame” is opening worldwide more or less simultaneously everywhere except Russia.

Estimates range from $260 million to $300 million domestically, and between $800 million and $1 billion globally.

Helping the cause is that reviews, at 97 percent fresh on Rotten Tomatoes, have been among the best for any Marvel movie. “Endgame” concludes not just the arc of the “Avengers” movies but signals the completion of the 22-movie Marvel Cinematic Universe, as mapped out by Marvel Studios President Kevin Feige.

Feige has been tight-lipped about what the next phase will be, though he has new reinforcements. Disney’s acquisition of 20th Century Fox brings Marvel’s X-Men and Deadpool under the same roof.

“Endgame” will give a much-needed jolt to the box office, which is running about 16 percent behind the pace of 2018. Ironically, though, the weekend won’t be much an improvement over the same time frame last year since that’s when “Infinity War” opened. And no other wide release is daring to open against “Endgame.”

Ultimately, the only thing standing in the way of “Endgame” is “Endgame,” itself. With a running time of three hours and one minute, theaters won’t be able to fit as many screenings in per day as they’d like to.

“It looks like the demand is going to outstrip the supply but theaters are doing their best to keep up with that,” said Dergarabedian. “Look, there’s only 24 hours in a day and it’s a 3 hour and one minute movie.”

Disney said Wednesday that “Avengers: Endgame” grossed about $107.2 million in China on Wednesday, where it first opened, two days ahead of the U.S. release.

Can Avengers: Endgame really hit $300 million in the U.S.?

On Tuesday, Fandango reported that 4,000 showings on its site had been sold out. To handle the demand, some theaters have even begun offering round-the-clock showings. Still, in some areas of the country, it’s difficult to find tickets, especially for a group of moviegoers.

Current industry predictions have the film earning between $260 million and $285 million in the U.S. during its debut. “Endgame” will have the highest opening weekend in U.S. history if it cracks $257.6 million, the current record held by “Avengers: Infinity War.”

However, even with a record number of presale tickets and additional showings, “Endgame” probably won’t earn much more than the predicted range. Although some have speculated that the highly anticipated film could reach or surpass the $300 million mark, it’s not likely.

First and foremost, “Endgame” is not the only film in theaters this weekend. “The Curse of La Llorona,” “Breakthrough,” “Shazam!,” “Hellboy,” “Missing Link,” “Dumbo” and “Captain Marvel,” among others, are contracted to play over the weekend at theaters nationwide. Even if no one were to attend these screenings, theaters are still obligated to set aside screens for these films to play.

Then there is the run time of the film — three hours, two minutes. With an additional 30 minutes tacked on for previews and 30 minutes for cleanup at the end of the film, a theater can only show “Endgame” about three times in a 12-hour period.

Some AMC and Alamo Drafthouse theaters have opted to add more showings, including ones at 4 a.m. and 7 a.m., at a few dozen locations. However, the boost that these cinemas get, likely won’t tip the scales too much for the overall opening weekend gross.

Currently, “Endgame” is expected to play in around 4,600 theaters this weekend, the widest release of any film in U.S. history.

Its predecessor, “Infinity War” showed in around 4,470 theaters when it was released last year and hauled in an average of $57,000 per theater, according to data from Comscore.

The only other film to have a higher profit average per theater was “Star Wars: The Force Awakens,” which took in around $59,900 per theater in 2015. “The Force Awakens” played in 4,100 locations during its debut and hauled in a total of $247.9 million in its first weekend.

However, even if “Endgame” were to earn $60,000 per theater during its debut, it would only garner $276 million for its debut. This would be a huge feat for the film, but puts it $24 million shy of the $300 million mark.

Theaters would have to average more than $65,000 each in order for “Endgame” to come close to hitting that level.

Dergarabedian noted that this kind of benchmark could never have been hit in past decades, as inflation and rising ticket prices have helped bump up these figures.

“Endgame” will get a bit of a boost from ticket sales at Imax theaters — of which there are about 400 locations showing the film in the U.S. — as those tickets tend to be more expensive than traditional movie tickets, he said.

Current forecasts have the total global opening ranging between $750 million and $900 million, with analysts predicting that “Endgame” will be the fastest film to hit the $1 billion mark.

“Avengers: Endgame” is expected to have one of the biggest opening weekends ever, but will they surpass a $1 billion global opening weekend? The oddsmakers at BookMaker.eu doubt it, as the odds are currently -2000 (1/20) that when the Avengers assemble they will fall under the billion-dollar threshold.

“For Avengers: Endgame to surpass $1 billion it would need to surpass it’s already lofty expectations in China and the United States. Tony Stark and company may be able to defeat Thanos, but surpassing $1 billion may prove to be an insurmountable foe” said head Entertainment Oddsmaker DJ Fields.

Domestic projections are much better as  Avengers: Endgame is currently listed as a -300 favorite (1/3) to break the U.S.opening week record of $257,698,183 that the franchise previously set.

Will Avengers: Endgame break the U.S. Box office record for biggest Opening Weekend ($257,698,183)? BoxofficeMojo.com will be the official source.

Who will have the highest U.S. Box Office Gross for Opening Weekend?