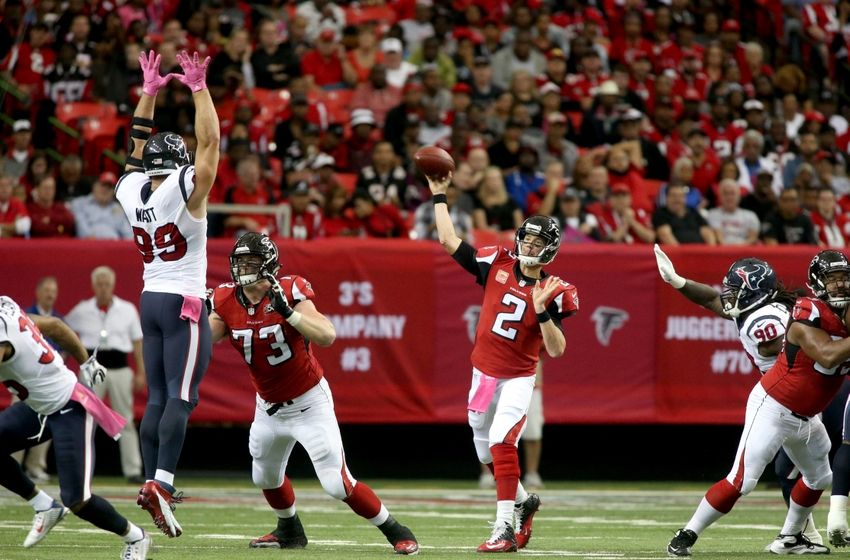 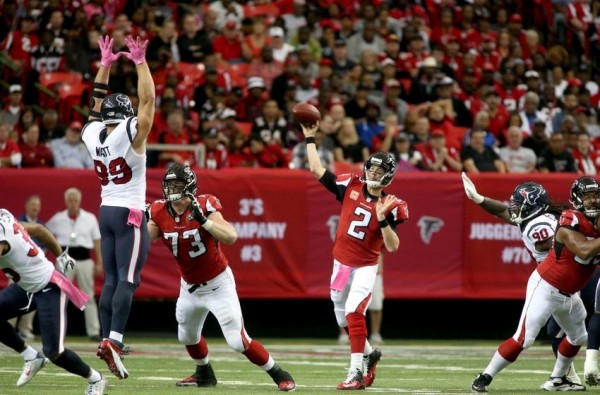 How would you like being the best defensive player in the NFL and have your defense get run over to the tune of 48-21? It must be great being JJ Watt, but this season is going horribly for the big man. It got worse in Atlanta on Sunday as the Falcons jumped on Houston and would not get off. Houston was being shut out 42-0 at one point as satisfied Falcons fans headed home for a Sunday nap before the fourth quarter even began.

The first of many Falcons touchdowns came as a result of an interception by the Falcons defense. Devonta Freeman scored after the turnover and he showed out for the second week in a row. He ended the game with three more touchdowns, the second of which put his Birds up 14-0.

Freeman also set up a Falcon’s score with a long catch and run that led to a short TD throw from Matt Ryan to Hankerson. That made it 28-0 and the rout was on.

The Texans had a nice drive near the end of the half, but missed the FG attempt and went into the half hopeless and down four touchdowns.

The second half was no kinder to Houston, as Atlanta poured it on. Freeman took it to the promised land for his third score of the day to put his team up 35-0.

After two games Freeman has shown himself to be invaluable. I would never have guessed this level of production out of the second year man from FSU. I am glad to be proven wrong on this one! His play has opened up the offense so much. I hate to compare the kid to Marshall Faulk, but the way he is running and catching the ball out of the backfield I can’t help myself.

The rest of the game was merely the Falcons grinding out the win and Houston getting some late scores to make the score look reasonable. Atlanta improves to 4-0 while Houston flounders at 1-3.

Lowlight of the Game: None really. OK, seeing the Georgia Dome empty out maybe. So few blowout wins for the Falcons in the past two years, you would think fans would hang around a bit longer. What’s the rush to get home? Big Instagram post? Pot roast ready? Or maybe folks were trying to beat the I-85 traffic (no chance in hell, it is awful 24/7).

Pleasant Surprise: Leonard Hankerson looked good in this game and appears to be the go to #2 receiver. I hate to say it but Roddy White is about to be put out to pasture. I love White, but he has produced just four catches through four games with no TDs.

Tweets of the Games:

Ex-Falcon Steven Jackson had 6 touchdowns all of last season. Devonta Freeman has 6 after less than 3.5 games.

Deandre Hopkins has more receiving yards than Ryan Mallett had passing yards. That is all

A quarter of the way thru the season, #Falcons perfect 4-0 after 48-21 win over Texans
This team won 6-games last year

davonta freeman is backpacking a lot of fantasy teams out there