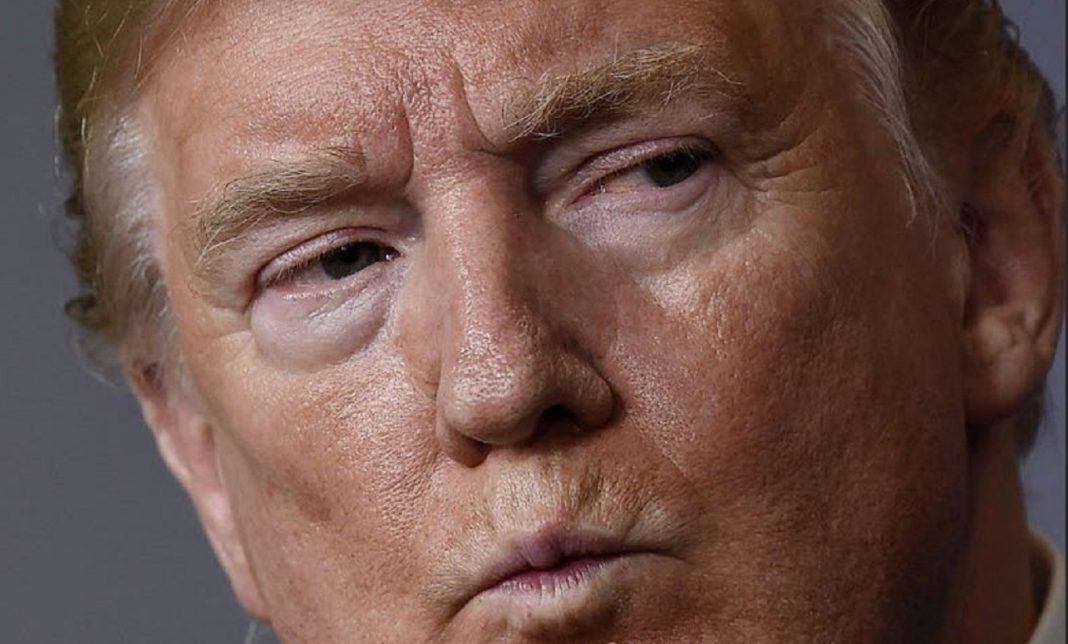 Donald Trump outdid himself last week with claims that he quickly backtracked on. ‘Sarcasm’ was his excuse of the week, even in his three tweets (that were quickly deleted) where he spoke of the Noble Prize. Of course, people quickly pointed out the misspelling for Nobel Prize, but Donald just said he was being ‘sarcastic’ as with the disinfectant and UV light claims from Thursday.

What was most frustrating for the president was that FOX News wouldn’t even defend his Thursday claims or as he likes to call them ‘suggestions.’ Not having his state television back him sent the president off even more than newspapers around the world ridiculing him.

“Not having FOX News back him drives the president more crazy than anything,” a White House source said. “He needs to know that someone always has his back no matter what he says.”

Until he realizes how much he misses the cameras, expect more outbursts of tweets blaming everyone for the Coronavirus as his poll numbers continue dipping.

Lessons Learned That Shouldn’t Have To Be Learned

Lysol is for toilet bowls and countertops, not human consumption. The company that manufacturers it felt compelled to emphasize the danger of ingesting it after President Donald Trump’s musings about heat, light and disinfectant in the time of coronavirus.

Trump’s thinking-out-loud theories took a turn toward hazmat territory this past week when he said it would be interesting to see whether people’s innards could get “almost a cleaning” from disinfectants. Doctors tweeted their alarm, worried that people will take Trump’s comment as a cue and swallow chemicals that will harm or kill them.

Trump also gave weight through his bully pulpit to an unproved theory that heat and humidity might hasten the destruction of the coronavirus, suggesting people could be safer around each other in the outdoors.

Research pointing to that possibility is preliminary, other research has found otherwise, and this pandemic has spread in the tropics and Southeast Asia as well as through the northern hemisphere.

Trump followed up Saturday with a baseless boast about testing.

Meantime, Trump’s veterans affairs secretary went even farther than the president in talking up potential benefits of a malaria drug against COVID-19. It’s an area of speculation that his own agency says “displays a dangerous lack of expertise” by amateurs.

TRUMP, on the virus: “I see the disinfectant that knocks it out in a minute, one minute. And is there a way we can do something like that by injection inside or almost a cleaning? Because you see it gets in the lungs and it does a tremendous number on the lungs. So, it would be interesting to check that … you’re going to have to use medical doctors … but it sounds — it sounds interesting to me.” — briefing Thursday.

The fact Trump would even flirt with the idea prompted a statement from Reckitt Benckiser, parent company of the maker of Lysol and Dettol, that “under no circumstance should our disinfectant products be administered into the human body (through injection, ingestion or any other route).”

Clorox echoed that bleach and other disinfectants “are not suitable for consumption or injection under any circumstances.”

The U.S. surgeon general’s office moved to discourage people from thinking they can self-medicate from something in the house: “PLEASE always talk to your health provider first before administering any treatment/medication to yourself or a loved one.”

As the blowback unfolded, Trump said Friday he was being sarcastic the day before.

TRUMP, on an unproved theory that sunlight, heat and humidity can destroy the virus faster than inside the house: “I hope people enjoy the sun. And if it has an impact, that’s great. … And if heat is good, and if sunlight is good, that’s a great thing as far as I’m concerned.”

Sunlight may be a disinfectant for the spirit and outdoor exercise is recommended in today’s social isolation, but there’s no proof it will make the pandemic go away. Without declaring that it would, Trump is again giving traction to a theory that could prompt people to let down their guard around others outside.

Wlliam Bryan, who leads the Homeland Security Department’s science and technology directorate, told the briefing about incomplete, “emerging results” from research that suggest solar light, heat and humidity might be effective at neutralizing the virus. Past studies have not found good evidence of that.

Dr. Michael Ryan, the World Health Organization’s emergencies chief, said in March that “it’s a false hope to say yes, it will just disappear in the summertime like influenza.” Trump said early in the outbreak he expected it to end with the warmer weather of April.

TRUMP: “We have now Tested more than 5 Million People. That is more than any other country in the World, and even more than all major countries combined!” — tweet Saturday.

Actually, the U.S. has tested far fewer people than “major countries combined” and lags dozens of countries in testing its population proportionally.

Together, just three major countries — Russia, Germany and Italy — have tested about 6.5 million people, compared with over 5 million in the U.S. And the United States is easily outdistanced when testing in other Group of Seven countries is added to the mix, as well as powers such as India. Moreover, the count does not include China, which has more than four times the population of the U.S. but has not published national testing numbers.

More than 30 other countries have tested a larger share of the population than has been done in the U.S., which was slow to make COVID-19 diagnoses available and still can’t offer it to everyone who might be infected.

ROUND 2 – Coronavirus Returns In Fall

His public health officials refuted his statement on the spot that the coronavirus won’t be coming back. As for his statement that it won’t be as bad in a second round, that’s more complicated.

“There will be coronavirus in the fall,” Dr. Anthony Fauci, the government’s top infectious disease expert, said at the briefing. “I am convinced of that because of the degree of transmissibility that it has, the global nature.”

How bad that will be will be determined by a range of factors that can’t be predicted with precision. Redfield said the situation may be more difficult than now because the coronavirus and the flu will be circulating at the same time, unlike during the bulk of the current pandemic. Or it may be less difficult if preparations and containment are better than now.

That’s not what the government’s top health experts have said for weeks, nor what his own agency has suggested. A new alert Friday from the Food and Drug Administration further underscored why the drug cannot be considered generally safe in this pandemic and why it has not been approved by the FDA for treatment of COVID-19.

Last month, the FDA authorized the narrow emergency use of the malaria drugs for hospitalized patients with COVID-19 who aren’t enrolled in ongoing clinical trials. But regulators said they are investigating life-threatening side effects reported to poison control centers and other health authorities.

In one such report, doctors at a New York hospital said that heart rhythm abnormalities developed in most of the 84 coronavirus patients treated with hydroxychloroquine and the antibiotic azithromycin, a combination Trump has promoted as part of his persistent and inaccurate portrayal of the malaria drug as a game-changer.

The drug has long been used to treat malaria, rheumatoid arthritis and lupus. A few, very small preliminary studies suggested it might help prevent the coronavirus from entering cells and possibly help patients clear the virus sooner.

Wilkie, as VA secretary, leads the nation’s largest health system. His agency’s own health care arm has criticized premature assessments on the effectiveness of the drug for the coronavirus. In an unsigned response to an audit report last month examining whether the VA had adequate stocks of the drug, top VA health officials called it “inaccurate and irresponsible” to assume hydroxychloroquine would benefit veterans for COVID-19.

“There are active investigations into these drugs and many others, as discussed by Dr. Anthony Fauci,” according to the unsigned VA response to the agency’s inspector general. “Yet no conclusions have been made on their effectiveness. To insist that a 14 days’ supply of these drugs is appropriate or not appropriate displays this dangerous lack of expertise on COVID-19 and Pandemic response.”

WILKIE, on a nationwide study finding that a malaria drug had no benefit for treating COVID-19 among veterans: “That’s an observational study. It’s not a clinical study. It was done on a small number of veterans. Sadly, those of whom were in the last stages of life. And the drug was given to them. And I have to also say that the drug — we know the drug has been working on middle-age and younger veterans … working in stopping the progression of the disease.” — interview Wednesday on MSNBC.

He mischaracterized the study’s finding.

Wilkie rejected a study that relies on his department’s own hospital data and finds no benefit from hydroxychloroquine. His claim that it helps younger or middle-aged veterans with COVID-19 is also unsubstantiated.

It’s true that the study, done by independent researchers at two universities with VA approval, was not a rigorous experiment. Yet with 368 patients, it’s the largest look so far at hydroxychloroquine for COVID-19, based on VA hospital data.

About 28% who were given hydroxychloroquine plus usual care died, versus 11% of those getting routine care alone.

Even though people given the drug tended to be sicker than the comparison group, researchers statistically adjusted for that and still saw no benefit from the drug.

There is no other published evidence that the drug is safe or effective for younger veterans with COVID-19.