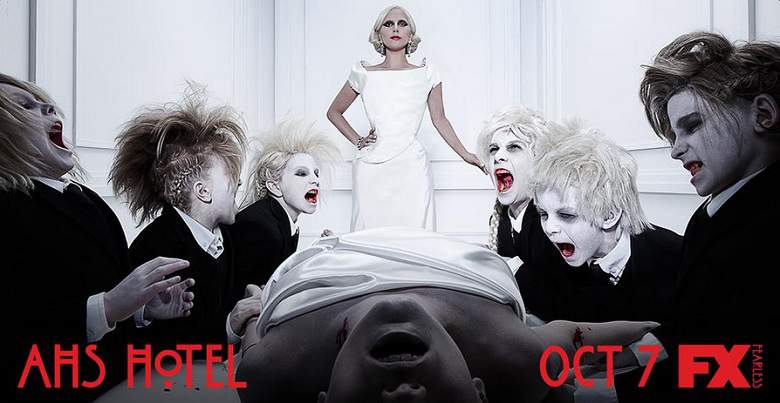 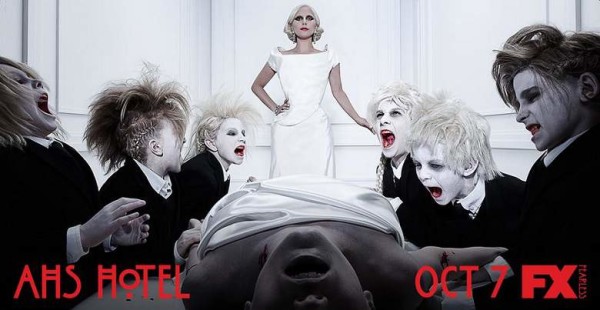 It’s the moment we have all been waiting for…FX’s American Horror Story returned tonight for its 5th season. Titled American Horror Story: Hotel, this season is centered on the mysterious and unsurprisingly spooky Hotel Cortez. The hotel intrigues a homicide detective (played by Wes Bentley), who encounters many strange characters within the facility, including the owner (known as The Countess).

Although this is the first season that series regular Jessica Lange doesn’t appear in, the show is bringing a whole new twist by introducing Lady Gaga as one of the main characters, The Countess. Of course, her character is a fashionista, but she also happens to be a bloodsucking, bisexual “wealthy social doyenne.”

The first episode fittingly titled “Checking In” demonstrates that show creator Ryan Murphy meant business when he planned to up the ante this time around. The episode was surprisingly dark and filled with more sex, gore and horror than any of the previous premiere episodes.

There is no slowly easing into things when it comes to the Hotel. Right off the bat we are introduced to two foreign women who are stuck staying the night in the hotel (as Kathy Bates’ character makes it clear there are “no refunds.”) Just minutes into the episode, one of the young women makes her way to the ice machine and is already surrounded by off-putting sights, such as a maid cleaning a bunch of blood out of a blanket and a young kid eerily pointing at her.

Unfortunately this doesn’t seem to bad compared to what she encounters when she gets back to her room. After noticing a horrible stench coming from their mattress, the two girls tear it open and are shocked to see a creepy, zombie-like human emerge out of it. Luckily Iris (Kathy Bates), the front desk concierge, saves the day by simply placing them in a new room (Room 64).

It then cuts away from the two girls’ horror story and begins telling the tale of Detective John Lowe. We meet him as he is walking into a gruesome crime scene. Let’s just say the dead woman sitting naked on an incredibly tortured man with a spear sticking through her is the more pleasant part of the whole scene.

It seems this is foreshadowing the Ten Commandment Killer who will be introduced this season. Evidently “thou shalt not commit adultery,” happens to be one of the commandments.

After returning home, Lowe gets an anonymous phone call, in which the caller tells him that they are the killer and they are finding their next victim at none other than Hotel Cortez.

Later on, Lowe ends up heading over to Cortez and asks to be placed in room 64.

Unfortunately, while all this was taking place, the two young women from the beginning didn’t manage to escape this twisted world. They are shown being force-fed by Iris while in cage-like devices. Sally tells Iris to “show some compassion,” and eventually lets one of the women free while Iris is away. However, the woman doesn’t get far before The Countess slits her throat.

The episode also packs in some backstory to the characters. In summary, Iris (Bates) is simply working at the hotel because her son Donovan (Bomer), was lured there by Sally (Paulson). As for Lowe (Bentley), he and his wife (Sevigny) lost their son at a carnival and are still searching for him.

The first episode ends by introducing Will Drake (Cheyenne Jackson). Drake is a New York designer, who is looking to buy the hotel to draw inspiration from. He brings his son to the hotel with him and The Countess (Gaga) leads him into the kid room, filled with candy and games – where Lowe’s missing son also happens to be.

This season did not shy away when it came to getting to the nitty gritty. While there were some character stories beginning to form, the episode was clearly put together to showcase the dark, boundary-pushing season we are about to endure. Not only am I looking forward to see some of the other AHS regulars return (i.e. Evan Peters, Emma Robertson, etc.), I am excited to see where the show takes us with Gaga’s character (and admittedly, a bit excited to see what she is going to wear).

You can catch the second episode of season 5 of American Horror Story on FX at 10pm next Wednesday, October 14.