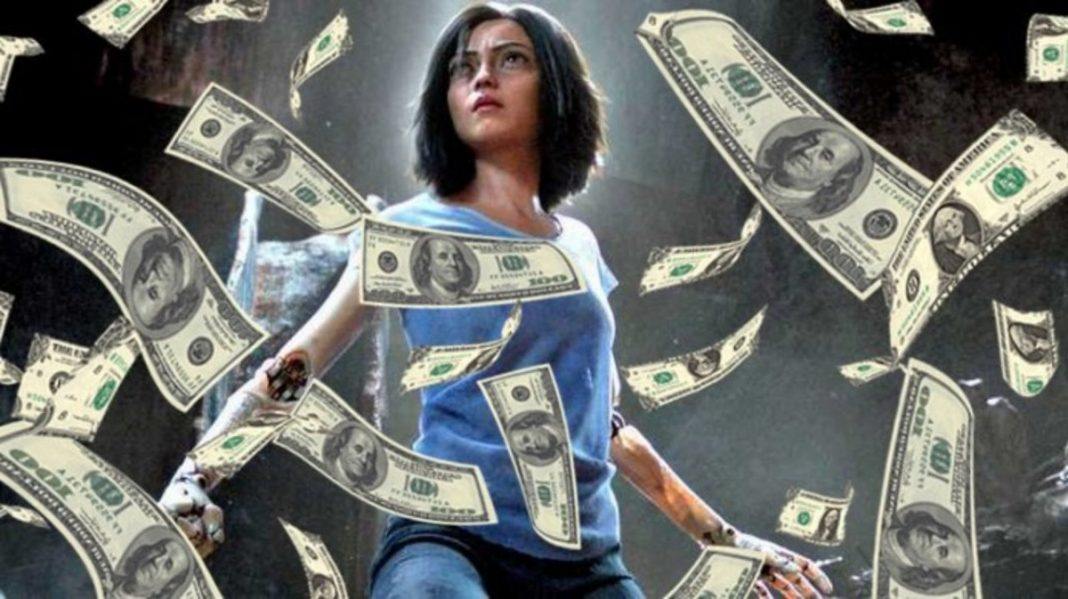 Ever since Super Bowl weekend, the box office has been chillier than usual, and the long-awaited “Alita: Battle Angel” didn’t come close to making back it’s budget. The James Cameron produced and Robert Rodriguez directed film couldn’t drum up much enthusiasm from either critics or fans. It might have exceeded analysts expectations, but that’s saying a lot about 2019 box office numbers. That amount was extremely modest when you look at how much it cost ($170 plus marketing expenses) to make the film.

Cameron’s name was pushed hard to market the film, but much like how Peter Jackson‘s name was also marketed for the expensive sci-fi movie “Mortal Engines” it obviously has failed. “Mortal Engines” opened to just $7.5 million domestically with a budget exceeding $100 million making it easily one of the biggest flops of 2018. The studio helped Cameron to avoid that kind of disaster by pushing “Alita” from a December crowded release to February.

So, while the sci-fi fantasy “Alita: Battle Angel” topped the charts and beat out a number of newcomers including the meta-romantic comedy “Isn’t It Romantic” and the horror sequel “Happy Death Day 2U” in its first weekend in theaters, but it is a victory with a few caveats. It’s leading the slowest Presidents Day weekend at the box office in almost 20 years and has a ways to go to make up its costly budget.

20th Century Fox said Sunday that the James Cameron-produced film earned an estimated $27.8 million over the weekend against a reported $170 million budget, which includes cost-saving tax incentives and rebates. It’s made $36.5 million total since its debut Thursday.

Robert Rodriguez directed the future-set film starring Rosa Salazar as a cyborg with no memory of her past. Critics were mixed on the results, and it’s become just the latest pricey and ambitious non-Star Wars, non-Marvel or DC sci-fi film to do less-than-stellar business at the box office, the last being the Peter Jackson-produced “Mortal Engines.”

It is quite a tumble (56.4 percent) from last year’s record Presidents Day box office when “Black Panther” grossed $202 million over the three-day weekend and propelled the industry total to $286.6 million. The weekend has in recent years been host to the openings of high earners from “Deadpool” to “Fifty Shades of Grey.” This year, total weekend earnings amount to only $125 million.

The rest of the charts remained fairly lackluster as well. Last week’s champ, “The LEGO Movie 2: The Second Part,” fell 38 percent in its second weekend earning $21.2 million, bringing its total to $62.7 million — which is less than the first film earned in its opening weekend.

Warner Bros. also had the No. 3 movie this weekend with its meta-romantic-comedy “Isn’t It Romantic,” starring Rebel Wilson as a woman who bonks her head and wakes up in a rom-com. It debuted to $14.2 million and has earned $20.5 million since its opening earlier in the week. It had respectable critics reviews, even better than the long-awaited “Alita.”

The other romantic comedy offering in theaters, “What Men Want,” with Taraji P. Henson, landed in fourth place in its second weekend with $10.9 million. And “Happy Death Day 2 U,” the horror sequel from Blumhouse and Universal, rounded out the top five with $9.8 million. The first film opened over twice as high, with over $26 million, but with a production budget under $10 million, it’s still bound for success.

The Dwayne Johnson wrestling film “Fighting With My Family” also opened in four theaters on Wednesday, earning $131,625 over the weekend.

Seven weeks into the new year and the box office is still struggling, down nearly 20 percent from where industry totals were last year.

“We’ve been down every week this year,” said comScore senior media analyst Paul Dergarabedian. “This weekend is emblematic of what is going on at the box office.”

Dergarabedian said that slow weekends beget more slow weekends — with less foot traffic at the theaters, fewer people are seeing previews for what’s to come and the cycle just continues. But “Captain Marvel” may be coming to save the day on March 8.