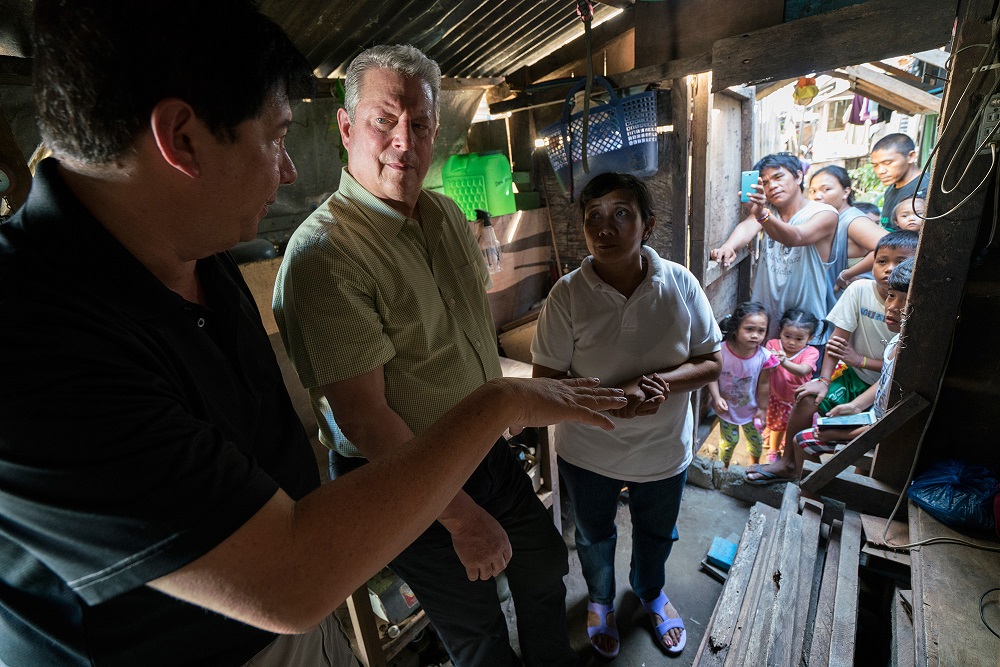 The timing couldn’t have been better for Al Gore to return with “An Inconvenient Sequel,” the follow-up to his award-winning “An Inconvenient Truth” as President-elect Donald Trump is about to become the 45th president of the U.S. Trump has stated that climate change is a ‘hoax’ perpetrated by China.

Ten years after the watershed environmental documentary “An Inconvenient Truth” debuted, climate change is as dire as ever, and yet the solutions are right in front of us, say directors Bonni Cohen and Jon Shenk, whose film “An Inconvenient Sequel” kicks off the Sundance Film Festival on Thursday.

The film, which follows former Vice President Al Gore on his continued quest to educate and inform the public and world leaders on climate change, is the first in a series of 14 environmentally focused documentaries scheduled to play at the annual film festival in their newly anointed “New Climate” section. The films include looks at coral (“Chasing Coral”), the Mexico City sewer system (“The Diver”), Greenland’s ice sheet (“Melting Ice”), and the industry of big-game hunting (“Trophy”).

Sundance founder and longtime environmentalist Robert Redford said in a statement that “independent perspectives are adding the depth and dimension needed for us to find common ground and real solutions.”

It’s fitting then that the festival begins with a sobering look at just what has happened since “An Inconvenient Truth” helped made climate change part of the popular consciousness. That film, directed by Davis Guggenheim, won the Academy Award for best documentary feature (Guggenheim’s role in the new film is as executive producer).

“It’s more overwhelming and more horrible and bleak than you ever thought, but also you realize that we’re closer than ever to a turning point where things can really change. It’s really intense,” Shenk said recently. “People have gotten used to and almost numb to the climate crisis and this feeling of, ‘What can we do?’ This film will elucidate both what has happened and what is possible.”

That the film is premiering the day before Donald Trump, who has dismissed climate change as a hoax, assumes the presidency is not lost on the filmmakers, who call this moment “a cold shower.” And yet they’re still hopeful.

“We’re at a very different place in terms of the solutions now,” Cohen said. “It is kind of an exciting time from Al Gore’s perspective, not only to put the dire message out but to offer to people solutions.”

Filmmaker Marina Zenovich also notes the poignant and urgent political moment in which these films are debuting. Her film, called “Water and Power: A California Heist,” has been described as “‘Chinatown’ the documentary.”

“We didn’t time this, but this is how it happened,” Zenovich said. “We have this valuable, precious resource that is like gold, it’s like a treasure, and it’s being privatized and commodified, and it’s kind of like the time has come for us to all come together and pay attention to it.”

While urgency looms in the New Climate section and documentaries on subjects like Syria and domestic police practices fill out the schedule, festival interest might rest elsewhere, according to Tatiana Siegel, a senior film writer for The Hollywood Reporter.

“It’s interesting because a lot of the docs are very issue-oriented,” Siegel said. “But when you talk to buyers, the ones that they’re most interested in are a little bit more escapist.”

There’s also films like “78/52,” which dissects the shower scene in Alfred Hitchcock’s “Psycho,” the 235-minute long Grateful Dead documentary “Long Strange Trip,” which recently sold to Amazon, and “Step,” about a group of high school girls in inner-city Baltimore.

“Step” director Amanda Lipitz, also a Broadway producer, had been making shorts about kids from her hometown of Baltimore who were the first in their family to go to college when she stumbled upon stepping, a style of dancing punctuated by hand claps and foot stomps popularized by black fraternities and sororities, through a group of girls she’d been documenting.

“They were doing this handclap thing and I said, ‘What are you doing?’ and they said, ‘We’re stepping! You’ve got to come, you’ve got to film this step team,'” she said. “I went and brought cameras and walked in to the gym and my heart stopped beating and I thought, ‘Oh my God, this is what happens in a great musical! When characters can’t speak anymore so they sing to express their hopes and their dreams.’ That’s what these girls were doing with step.”