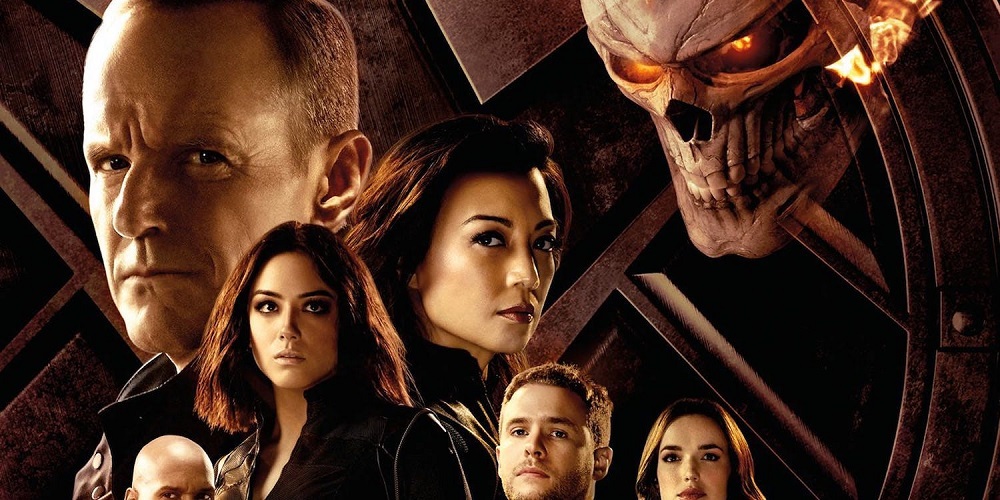 Now that Agents of SHIELD fans can breathe much easier after we broke the news last week ABC will be renewing it for Season 6, we can focus on the more exciting parts that make this show one of our favorites. We’ll remind those social media doubters that many of you questioned our sources when we broke the news that AOS would be getting a Season 5 last year. Those same sources that have always proven accurate for us are the same ones that gave us the Season 6 great news. We’re just so happy that ABC, Marvel, and Disney are keeping the faith with this part of the MCU.

Connected is the word that us fans hold on to whenever we watch Agents of SHIELD. Aside from the ever-improving adventures of Coulson’s team, what matters much for us is the show’s connection to the greater Marvel Cinematic Universe. It seems that most of the time, the only thing that connects this show to the MCU is its lead character, Phil Coulson.

Though at times, the situation is not unlike Steve Jobs and his non-acknowledgement of the Apple II during the inception of the Macintosh. As far as the films are concerned, Phil is still dead. Only Maria Hill and Lady Sif know his official situation, and it’s ironic that Sif is nowhere to be seen in Thor: Ragnarok. If she were, she’d probably be as dead as the Warriors Three.

Though recently, Coulson and his team become America’s most wanted with their faces plastered nationwide. Steve, Stark, and company probably now Phil’s alive by now. The only other solid participation of the show in the film universe was during Avengers: Age of Ultron where they sent the Avengers the location of Dr. List and Loki’s scepter and the preparation of the original helicarrier for Nick Fury. It’s like Harry Potter’s Nearly Headless Nick where the head is still attached to the body by a fold of skin.

But because the Marvel Universe, cinematic or otherwise is a vast thing, Agents of SHIELD has a lot of other characters at their disposal, most notably the Inhumans. The show itself has technically served as a propaganda vehicle to shuffle mutants into obscurity in favor of Inhumans. On the other hand, it’s not really the show’s fault while Marvel Comics’ mutants remain estranged to the MCU. It’s nice though that the show drops in other Marvel characters both known and obscure which excites fans when the characters are known and raises the eyebrows of Marvel fanboys when they’re obscure. Here is a list of the most powerful characters to be featured in Agents of SHIELD. 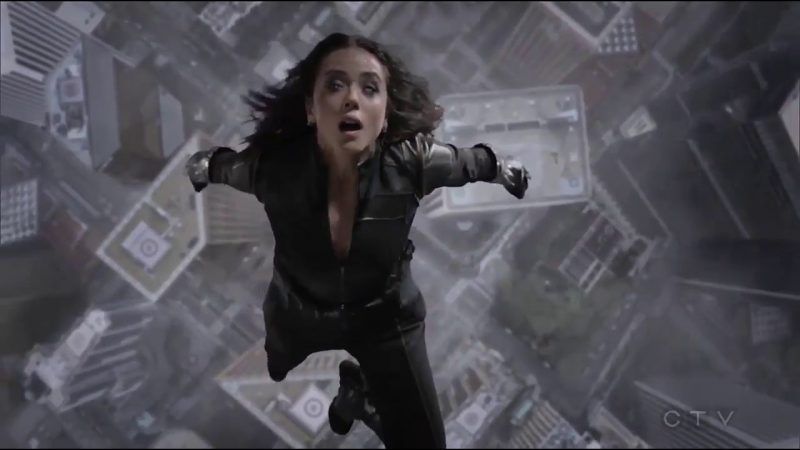 Quake (Daisy Johnson) – Aside from being able to shake Magnet’s head into unconsciousness, Quake isn’t much of a popular character in Marvel Comics. She was cute and intriguing though when I saw her as part of Nick Fury’s team during the Secret Invasion arc of Avengers: Earth’s Mightiest Heroes. In the comics, Daisy Johnson is the mutant daughter of Calvin Zabo aka Mr. Hyde. Here in Agents of SHIELD, she is the second main character of the series, re-imagined as an Inhuman since the MCU can’t use the word mutant. As mentioned, she’s not much of a known mutant character so Fox just let her character go. Technically, her character has more links to SHIELD and the Avengers than any books of the X-Men franchise. Like Quicksilver and Scarlet Witch. Here in AOS, she’s powerful enough to shake mountains and could be powerful enough to tear the Earth apart. 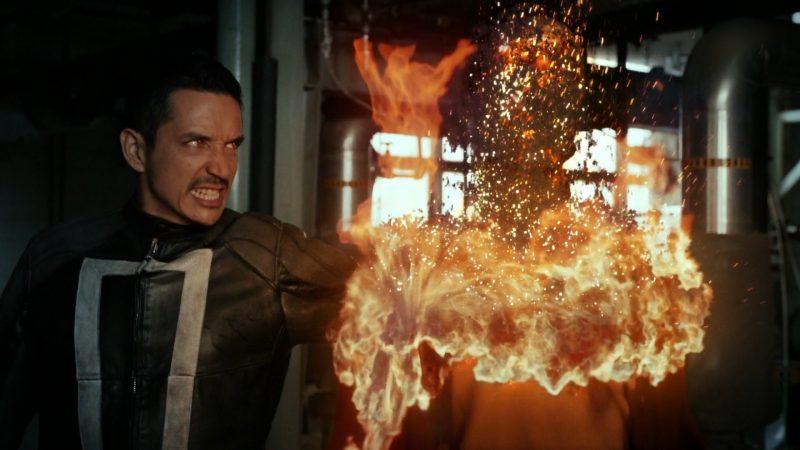 Ghost Rider (Robbie Reyes) – It was a complete surprise when ABS announced Ghost Rider’s appearance in Season 4. Ghost Rider has enough chops to star in his own film. We all know how that worked out though and given his many rather dark adventures, he’s better off on TV and perhaps with Netflix. He was awesome on Agents of SHIELD nonetheless, the Robbie Reyes incarnation anyway.  Featuring Robbie Reyes instead of Johnny Blaze was a good move as they sought to move the series away from the stigma of the films. It’s also a way to freshly re-introduce the concept of the Ghost Rider to the masses. Ghost Rider is a powerful mystical entity hosted by young Latino mechanic/street racer Robbie Reyes. He has great strength, has the ability to project physical and spiritual heat and had great durability. He’s powerful enough to defeat the all-powerful incarnation of AIDA. 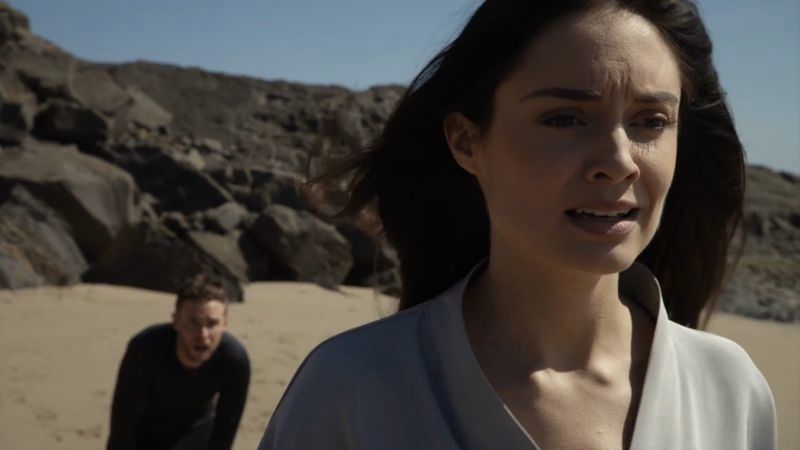 AIDA/Ophelia – in terms of power, AIDA is quite powerful. In her sinister LMD form, she’s practically an Ultron-level threat with the potential to create countless LMD duplicates of herself and other people. As Ophelia, she has the combined powers of all the Inhumans Fitz ever experimented on within the Framework. Originally in the comics, she’s a very obscure character that’s not even in the main Marvel Universe. AIDA stands for Artificial Intelligence Data Analyser, a more advanced version of Amazon’s Alexa. To take away the obscurity, her character is amalgamated with Madame Hydra Ophelia Sarkissian/Viper character. This role was beautifully portrayed by actress Mallory Jensen. 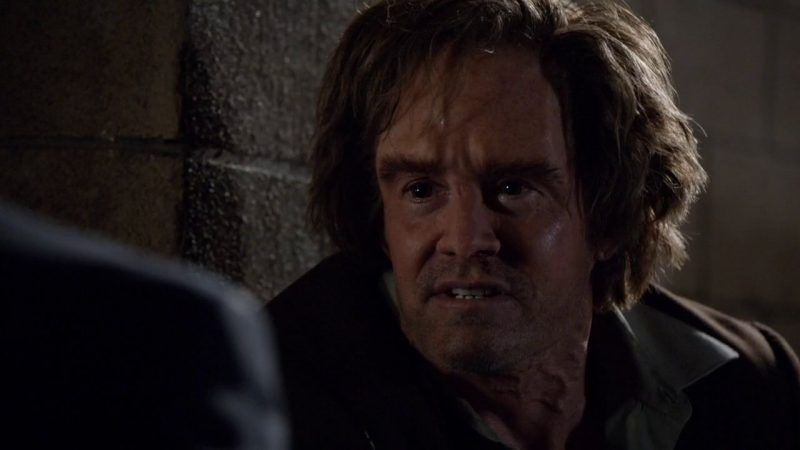 Calvin Johnson (Mister Hyde) – Mister Hyde is a more mainstream Marvel character to grace the cast of Agents of SHIELD. In the comics, he has tangled with the liked of The Incredible Hulk and Ghost Rider which is a testament to his power. In Agents of SHIELD, like in the comics, he is Daisy Johnson’s estranged father. His character is very prominent in the series highly regarded Season 2 played by Kyle MacLachlan. 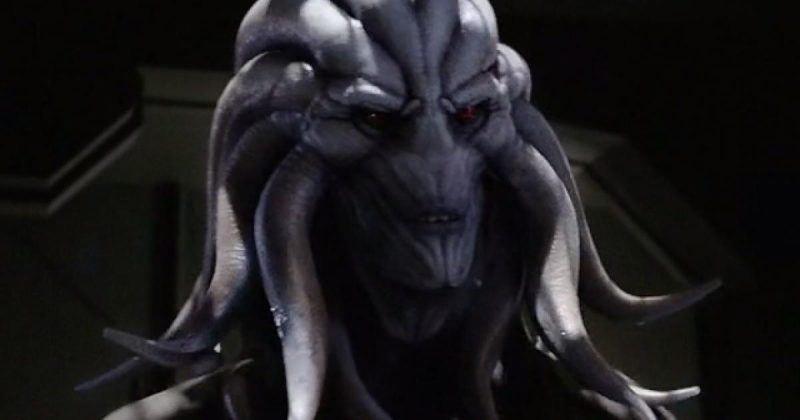 Hive – Hive is a powerful creature made up of a collective of parasites created by HYDRA in the comics. Like in the TV series, Hive also served as one of HYDRA’s figureheads. In the TV series, Hive is tied deeply into HYDRA’s origin as a pre-WWII organization. Here, Hive is an ancient god-like Inhuman worshipped by HYDRA members. He was exiled to another planet and like in the comics was fed with unsuspecting HYDRA agents. Hive has the ability to absorb the flesh of living beings from a short distance and can be a genuine threat to the more human members of the Avengers in case he encounters them. He can also sway or put other inhumans under his influence. 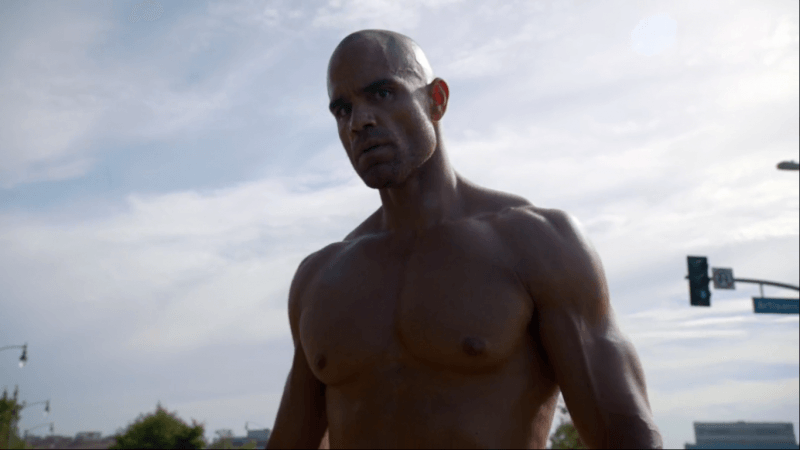 Carl Crusher Creel (Absorbing Man) – is another mainstream comic book villain originally appearing in the pages of The Mighty Thor as one of Loki’s power-imbued humans. Carl Crusher Creel is a simple crook imbued with the power to take on the properties of any material he touches. On Agents of SHIELD, it’s unclear whether or not he’s an Inhuman but what is clear is that he was created by HYDRA. He’s often portrayed as a mere thug in comics and animation, but he is being developed as a more sympathetic character on Agents of SHIELD. 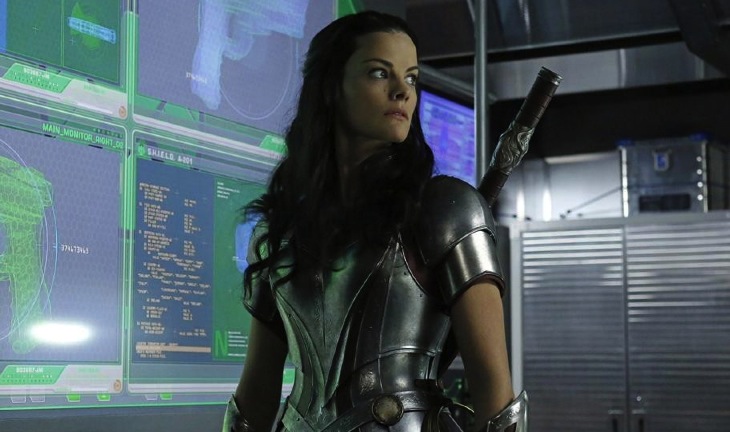 Lady Sif – is a notable Asgardian in the Thor comics mythos as well as in the first two Thor films. Perhaps to help boost ratings, she guested in Season 1 to help apprehend the sorceress Lorelei. In Season 2, she comes back to Earth to confront a Kree warrior. As an Asgardian, she has enhanced strength, durability and battle skills. 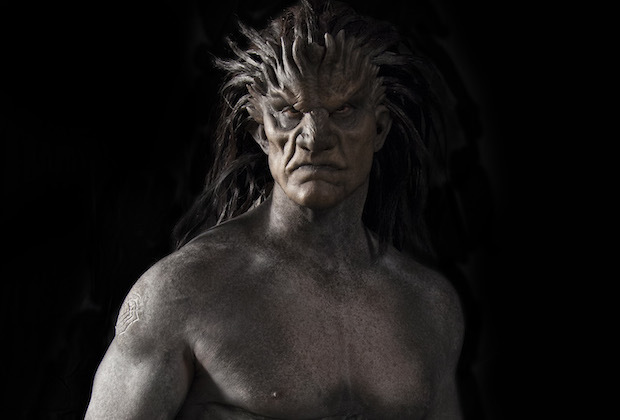 Lash – is another powerful character that can give some Avengers a run for their money. Lash is an Inhuman created both in comics and TV as someone who weeds the Earth of Inhumans he deems are not worthy of their powers. So he basically hunts down other people with powers whatever they may be. In the comics, he originates from another previously-unmentioned Inhuman city on Earth. In Agents of SHIELD, his creation was accidental when SHIELD psychologist Andrew Garner who was also May’s husband came in contact with some hidden Terrigen in Jia-Ying’s journal. 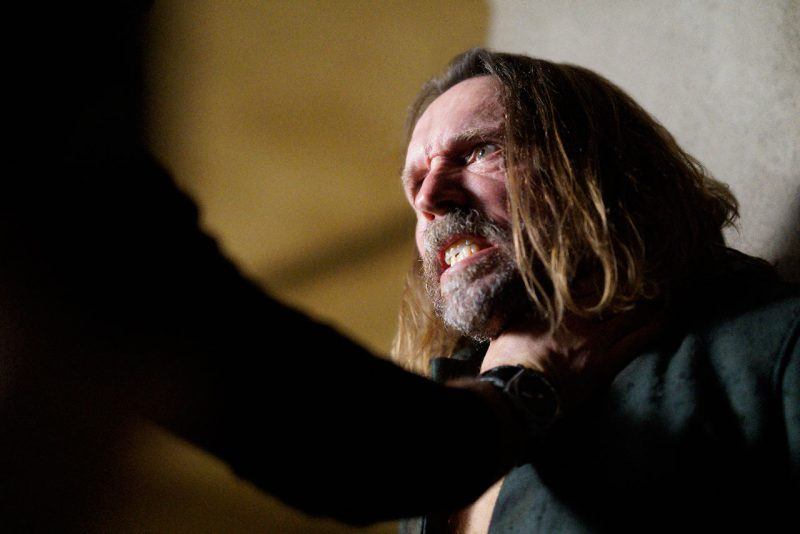 Tucker Shockley – is basically the Nitro of the Marvel Cinematic Universe. Tucker Shockley is an original character who has the power to become a powerful human suicide bomber, except he gets to live and re-assemble his molecules after he blows up. His power renders him difficult to kill as well as capture without Daisy Johnson having to exhaust herself to do so.

Patriot (Jeffrey Mace) – served as Captain America in the comics after WWII when the real Steve Rogers was encased in ice. When Captain America was recovered by the Avengers, he has since become known as The Patriot. In Agents of SHIELD, Jeffrey Mace was an accidental hero conscripted by the US government to improve human-inhuman relations. He was branded as The Patriot and served as SHIELD director. His pretended to be an Inhuman and his powers are derived from the same serum Calvin Johnson used to become Mr. Hyde. 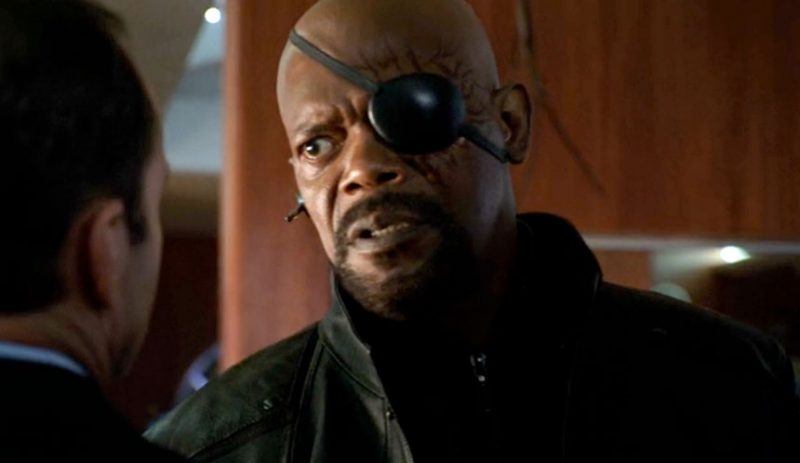 Characters that Truly Connected the series with the films

But when it comes to real connectivity aside from agent Coulson, here are some characters that made their way from big screen to small screen.

Nick Fury – made his appearance in the Season 1 finale when he and Coulson went up against John Garett aka The Clairvoyant.

Gideon Malick – played by the late Powers Boothe is perhaps the top member of the world council to whom SHIELD used to answer to and is the main person Nick Fury was talking to in the first Avengers film. Strange that he wasn’t present in Captain America: Winter Soldier unless Alexander Pierce told him to sit it out.

President Matthew Ellis – served as President of the United States in Iron Man 3. He made his appearance in AOS Season 3 in the advent of the Inhuman Outbreak. He puts Glenn Talbot, a notable character in the Incredible Hulk comics in charge of the Advanced Threat Containment Unit (ATCU).

Maria Hill – was formerly SHIELD’s assistant director before the agency’s fall in Captain America: Winter Soldier. She appeared first in the series pilot episode and in episode 20 after the fall of the agency.

Lady Sif – also makes solid the film universe’s connection to the TV show short of actually having Thor on board. Lady Sif appeared twice in the show to apprehend rogue sorceress Lorelei and to fight a Kree warrior sent to Midgard.

Jasper Sitwell – made an appearance several times on the show. His last appearance was a prelude to Captain America: Winter Soldier when he was re-assigned to the ship The Lumerian Star where he is taken hostage by Batroc the Leaper. His latest appearance is the Season 5 episode, Rise and Shine, as a young version of himself in a HYDRA academy alongside young General Hale.

Come to think of it; these characters do remind us that the two worlds, the MCU and AOS are more connected than us fans give them credit for. Still, an Iron Man fly-by wouldn’t hurt.