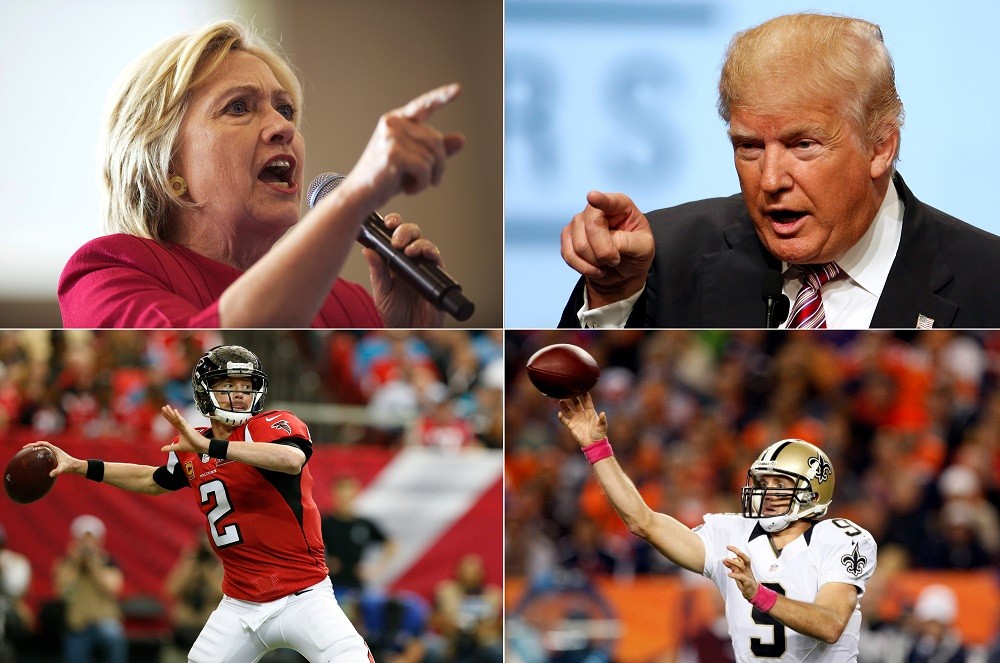 2016 Presidential Election as Divisive for NFL as the Rest of the Country, Just Ask the Buffalo Bills

The 2016 Presidential Election between Republican Donald Trump and Democrat Hillary Clinton is easily the most divisive election in memory. Half of the country thinks he’s insane, and the other half thinks she’s a crook. Announcing your support for one candidate or the other makes you a moron in the eyes of the other side.

This cycle has pitted friends against friends and siblings against siblings. And, yes, teammates and coaches against one another.

“There’s so many things I admire about Mr. Trump,” said Buffalo Bills head coach Rex Ryan at a Donald Trump campaign rally. “But one thing I really admire about him is—you know what—he’ll say what’s on his mind. And so many times, you’ll see people—a lot of people—want to say the same thing. But there’s a big difference: They don’t have the courage to say it.”

The Bills locker room wasn’t so ready to jump on the Trump Train—and, for some players, it severely affected their opinion of Ryan.

“Rex is such an open-minded guy, a really good person,” said a Bills player who asked to remain anonymous. But the fact he could back someone as closed-minded as Trump genuinely shocked me. Some of the African-American players on the team weren’t happy about Rex doing that.”

According to another player, this issue has caused quite a bit of divide in the locker room, especially among lines of race.

“I think that he can help this nation get back to a world superpower,” said white offensive lineman Richie Incognito. “Where I think he could help is putting us first again and having that—it’s my mentality, too—having that tough attitude where you put America first and everyone’s thinking we’re the greatest nation in the world. Don’t mess with America. That toughness is where I identify with him.”

Incognito, as it seems, has the same view as the majority of white players in the NFL. In fact, in a B/R Mag Straw Poll, 21 of 21 white NFL players polled expressed their intention to vote for The Donald. Only 2 of 22 black NFL players supported Trump.

Sure, this is a very informal poll, and there are 1,600 or so players in the NFL; however, the numbers certainly show an undeniable split. Others around the league have noticed as well.

“Black guys will talk about it to each other,” said Damien Woody, two-time Super Bowl champion and ESPN analyst. “White guys may talk about it to each other. But I think white players will tap around it with black players. The locker room normally isn’t politically correct. I know from talking to players things are different when it comes to Trump…a white player may parrot something Trump says, and the black player may think, ‘Oh, that’s how you feel?’ And it could cause problems.”

And, unfortunately, Woody isn’t wrong. A conservative-leaning offensive lineman, again choosing to remain anonymous, detailed a story about his relationship with a left-leaning linebacker teammate. The two usually stayed away from politics because of the discrepancy in their views; however, it has never been an issue.

After revealing his intentions to vote for Trump, things changed. They don’t speak, eat, or work out together anymore. The linebacker “can’t be friends with anyone who would vote for Donald Trump.”

And yes, things are just as polarized the other way. Open support for Hillary can be equally as damaging to one’s social circle. One lineman summed it up perfectly:

“That’s an issue with this country,” said another anonymous player. “We can’t have conversations anymore. We are too sensitive. It’s okay to disagree about things.”

But, hey, maybe we have more in common with those men we watch on Sundays than we thought. It doesn’t matter where you go; everybody hates everybody else.