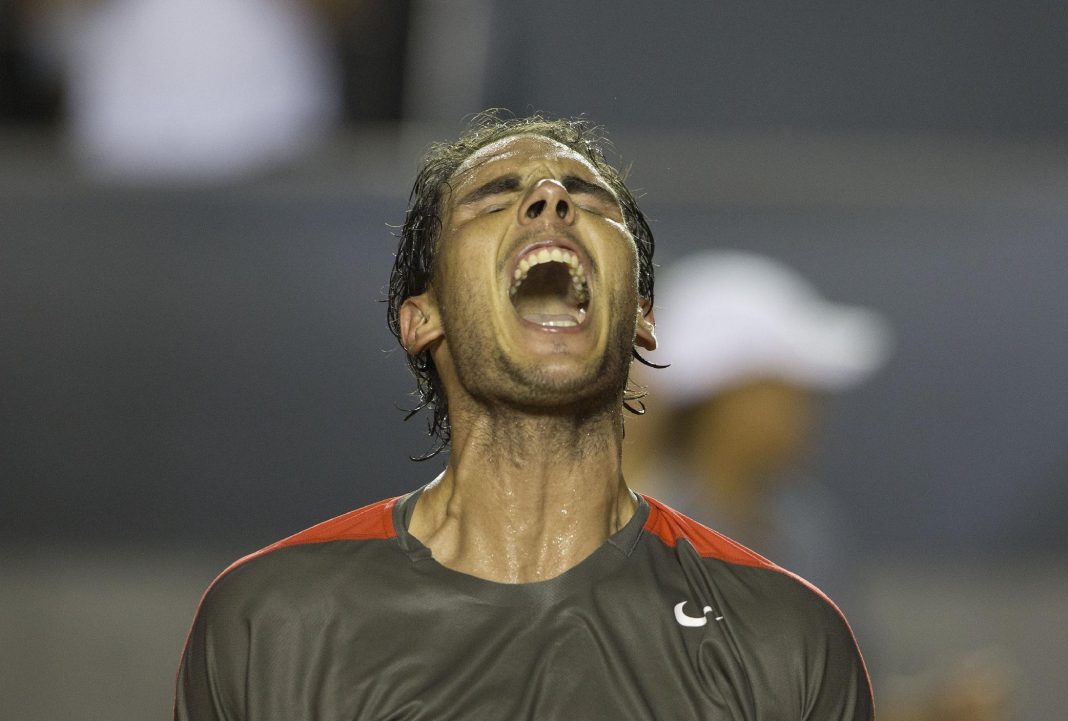 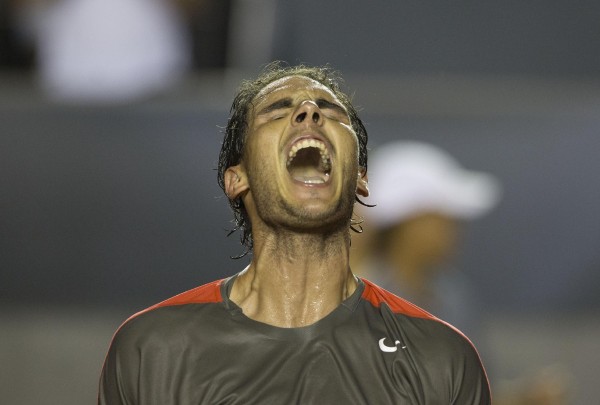 Today’s final match at the 2015 Madrid Open should be a clash of the titans as Spaniard Rafael Nadal takes on British Andy Murray. Rafi has had some stumbles this season, but with Novak Djokovic out of this open, it seems he’s come on strong taking out player after player determined to get to the finals while Murray has been playing on nearly empty but coming up a winner every time.

Murray entered this Open right on the heels of winning the 2015 Munich Open and even commented that even he was rather surprised to have won after playing his match in the twilight hours. Rafi, has found his spot again and this will be a great match to watch on Sunday.

World No. 3 Andy Murray and No. 4 Rafael Nadal clash in a blockbuster Mutua Madrid Open final today. The duo meet for the 21st time with Nadal boasting a 15-5 overall lead in their FedEx H2H series and a 6-0 advantage on clay. The Spaniard is chasing a record fifth title in Madrid, while Murray is seeking a second. The Scot’s previous win here came in the tournament’s last year indoors. 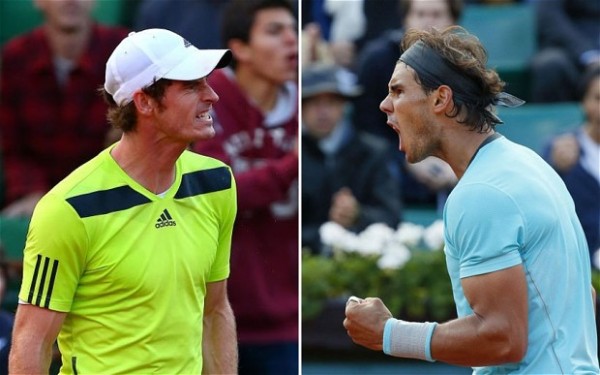 • MURRAY EYEING A FIRST: Murray is off to his best ever start to a clay-court season, going 8-0. Last week in Munich he reached his first ATP World Tour final on clay, defeating Philipp Kohlschreiber, and today he bids for his first ATP Masters 1000 title on the surface. His win over Kei Nishikori in the SF was just his second over a Top 10 player on clay with his other coming against Nikolay Davydenko in Monte-Carlo six years ago.

• MURRAY CHASING HISTORY: Murray is bidding for a 33rd ATP World Tour title today, which would put him level with Arthur Ashe and Mats Wilander in 19th place on the Open Era title leaderboard. If the World No. 3 is successful today, he will become just the fourth player to beat Nadal in a final on clay, joining Djokovic (4 times), Roger Federer (2) and Horacio Zeballos(1).

• BIG FOUR DOMINANCE: With Nadal and Murray in the final, the Big Four is guaranteed to extend its dominance at this tournament level. After today, the quartet of Nadal, Murray, Federer and Djokovic will have accounted for 43 of the last 47 ATP Masters 1000 tournaments (since 2010 Monte-Carlo). The only exceptions came at Paris-Bercy in 2010 (Robin Soderling) and 2012 (David Ferrer) and last year in Monte-Carlo (Stan Wawrinka) and Toronto (Jo-Wilfried Tsonga).

•    Nadal advanced to his seventh Madrid final with his fourth straight-set win of the week, defeating Tomas Berdych 7-6(3), 6-1. The Spaniard posted victories over Steve Johnson, Simone Bolelli and Grigor Dimitrov in the earlier rounds.
•    This is Nadal’s seventh final appearance at the Mutua Madrid Open. He has won the title here four times: 2005 (d. Ljubicic), 2010 (d. Federer), 2013 (d. Wawrinka) and 2014 (d. Nishikori). He is on a 14-match winning streak at this event.
•    Nadal is contesting his 41st ATP Masters 1000 final (27-13) and his 94th overall (65-28).
•    Nadal is aiming to extend his record of winning a European clay-court title in the build up to Roland Garros to 11 straight years.
•    Nadal has a 14-3 record on clay this season with his losses coming against Novak Djokovic (Monte-Carlo SF) and Fabio Fognini, twice (Rio de Janeiro SF and Barcelona 3R). The last time he lost more than three matches on clay in a single season was in his rookie campaign in 2003.
•    In February, Nadal won the 46th clay court title of his career in Buenos Aires (d. Monaco), and is now just three short of Guillermo Vilas’ record clay court title haul of 49. His victory in Argentina ended a nine-month trophy drought dating back to Roland Garros 2014 (d. Djokovic).
•    In March, Nadal fell in the QF at Indian Wells (l. to Raonic after holding three MPs) and the 3R in Miami (l. to Verdasco).
•    Nadal lost his opening match of the season, 1R in Doha (l. to Michael Berrer), before reaching the QF of the Australian Open (l. to Berdych).
•    In 2014, Nadal finished in the Top 3 for the ninth time in the past 10 years (except 2012), capturing four titles in seven finals. The Spaniard extended his streak of winning at least one Grand Slam title per year to a record 10th year in a row with his ninth victory at Roland Garros. His 14 Slam titles are tied second all-time with Pete Sampras, behind Roger Federer(17).
•    After overcoming Philipp Kohlschreiber for the second time this week in his opening match, Murray posted comprehensive wins over Marcel Granollers, Milos Raonic and Kei Nishikori to reach his second Madrid final and his first since the tournament’s move to clay.
•    Murray improved to 2-13 vs. Top 10 opponents on clay with his victory over Nishikori.
•    Murray leads the way this week on return, breaking serve in 17 of his 41 return games (41%). Nadal is in second on 38%, winning 14 of his 37 return games.
•    Murray returns to Madrid for the ninth time. He lifted the title here in 2008 (d. No. 2 Federer in SF, Simon in F) – the last year the tournament was played indoors. Prior to this week, his best results since its move to clay were three QF outings in 2009 (l. to Del Potro), 2010 (l. to Ferrer) and 2013 (l. to Berdych).
•    Murray is contesting his 14th ATP Masters 1000 final (9-4 in finals) and 49th overall (32-16).
•    Murray returned to action in Munich last week for the first time since taking a few weeks out to marry long-term girlfriend Kim Sears. In Germany, he captured the 32nd title of his career and his first on clay, defeating Kohlschreiber in the final. With the win he improved to 17-2 in finals against players ranked outside the Top 10.
•    Murray joined Andy Roddick, Manuel Orantes and John Newcombe in 22nd place on the Open Era title leaderboard with his 32nd career title. He can rise as high as 19th with victory today.
•    In March, Murray advanced to the SF at Indian Wells and the final in Miami, losing to Djokovic each time. With his 4R win over Anderson in Miami, Murray became the first British player to hit 500 wins. He defeated 185 different opponents from 50 different countries en route to the milestone.
•    Murray opened his season by reaching the Australian Open final for the fourth time (l. to Djokovic).
•    Murray has now reached at least the QF in 16 of his last 17 tournaments (94%), which is the highest percentage on tour over the last 10 months.
•    In 2014, Murray finished in the Top 6 for the seventh year in a row, winning three titles.