The upcoming biopic 10 Days in a Madhouse – The Nellie Bly Story will be releasing in theaters soon, so of course I had to check out the trailer. The movie tells the story of 23-year-old journalist Nellie Bly, who goes undercover for world-famous editor Joseph Pulitzer. In an elaborate plan, Nellie fakes insanity in order to get her herself arrested and committed into Blackwell’s Island Insane Asylum for women.  After successfully getting committed to the institution, Nellie discovers the shocking truths and injustices happening within the asylum walls. The young journalist goes on to reveal the ugly realities to the world, as she becomes one of the most influential journalists in American history.

With over 8000 submissions from hopefuls hoping to portray Nellie in the film, newcomer Caroline Barry was selected for the coveted role. This casting happening just two months after the young actress moved from Colorado to Los Angeles to pursue acting. In a recent interview, Caroline recounted her audition saying, “the director said he was looking for Nellie Bly’s smile and that optimistic spirit, and he felt my audition was the one that really had that smile and the brightness and optimism” Here, she refers to the director Timothy Hines who is known for his adaption of HG Wells’ War of the Worlds.

Alongside Caroline is actor Christopher Lambert, who stars as E.C. Dent, the head of the mental hospital. Lambert is known for his roles in such films as Highlander and Mortal Combat. He also appears in the upcoming movie Hail Caesar!, where he co-stars alongside Scarlett Johansson, Channing Tatum, Jonah Hill and George Clooney.  In an interview on LA Talk Radio, Caroline revealed that Christopher brought authenticity to his role as antagonist Dr. Dent by portraying his motives as misguided good rather than evil.

Actress and former supermodel Kelly Le Brock, who you may recognize from her role in the John Hughes cult classic Weird Science, also has a supporting role in the film. It is noted that Kelly was cast in the production right before filming and had only 12 hours to prepare for her role. Kelly later told the press that she drew from her own experiences dealing with mental illness with her past stalkers.

The movie enlisted a cast of 90% women and was worked on by Avril Beukes, who is known for her humanitarian work in film and has worked on numerous Academy-Award nominated movies and documentaries. In addition Brooke Kroeger, a journalism professor at New York State University and writer of Nellie Bly: Daredevil, Reporter, Feminist, served as the historical consultant of the film.

In the trailer, Nellie is seen meeting publisher Joseph Pulitzer, who tells her that his newspaper would like her to “infiltrate” Blackwell’s Island Lunatic Asylum for Women. She tells him she will “teach [herself] to be mad” in order to fulfill his request. She embarks on the assignment, even though the newspaper does not have a clear plan on how to get her out once she is admitted. 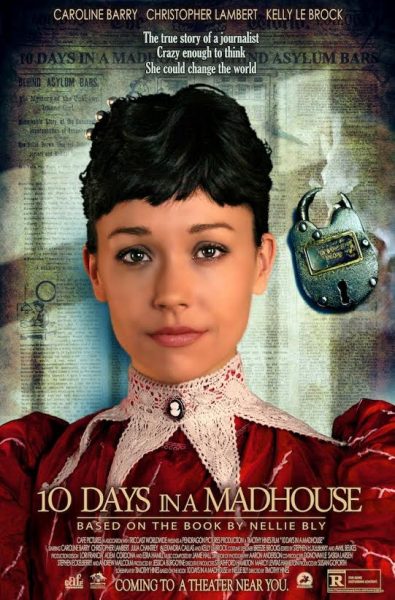 Soon after, Nellie and the other women in the facility are seen enduring cruel and unethical treatments. Dr. Dent claims that Blackwell will one day become a “utopian example of the most advanced treatment of the insane.” The women are prohibited from reading and seem to be driven to any higher degree of insanity from the practices put into place within the asylum.

10 Days in a Madhouse first premiered at the Marche Du Film Festival De Cannes in early May. Soon after, Variety reported that it was the 3rd largest trending film on the Internet that week. Additionally, it was also chosen as the opening film for Geena Davis’ inaugural Bentonville Film Festival, which celebrates women and diversity.

An interesting detail of the film is that they did the majority of its filming in Salem, Oregon. This being the same location as where the movie One Flew Over the Cuckoo’s Nest was filmed, which also addressed injustices and misconceptions with mental health. The crew used an abandoned mental institution with no electricity, which meant actors and crew were working in temperatures around 10 degrees.

Nellie Bly has garnered notable attention after she was featured in Life magazine’s May 2015 issues in “Top 100 Women Who Changed the World.”

Furthermore, the movie gives audiences insight into how mental illness was treated not all too long ago. While we have made steps in the right direction, mental illness continues to be a prevalent issue in society today. However, it is brave people like Nellie who enable us to continue to make progress towards creating a safer environment for everyone struggling with their mental health and well-being.

Based on an incredible true story, 10 Days in a Madhouse will be opening in New York City on November 11th and nationwide (in AMC theatres) on November 20th.
10 Days In A Madhouse Movie Trailer