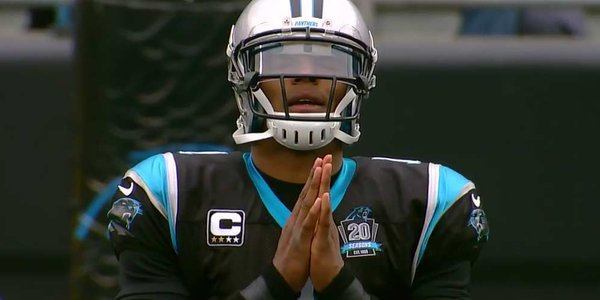 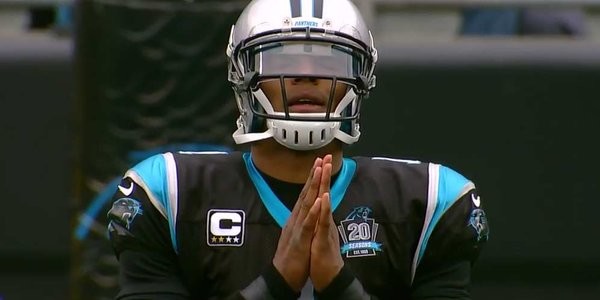 I don’t have any inside information about Cam Newton‘s religion or his personal philosophy. What I do know is that the most disciplined Buddhist monk would envy Newton’s ability to live in the “moment.”

It’s apparent in each game when Cam begins his first offensive drive. Before leaning in to take that initial snap, the Carolina Panthers QB closes his eyes, takes a deep breathe with a prayer, and makes sure he is present in the football game.

Meaning the 26 year old from College Park, Georgia isn’t thinking about what commentators have said during the week. He’s not worried about how mean the opposing linebacker is that is staring him down. Newton isn’t letting his mind run wild with thoughts of a complicated offensive playbook that would confuse even the best students at Yale.

Cam Newton is focused on playing a football game, period.

Judging by his team’s 17-1 record to this point, Newton has become a full blown football zen master and only needs one more win over Denver in Super Bowl 50 to complete his journey to NFL immortality.

The best example of Cam living completely in the moment came after his Panthers won the NFC Title and was asked about going head to head with Peyton Manning in the big game.

Sure the guy might have been laying it on thick, making everyone think he was so focused on Arizona that he didn’t even overhear the Denver final score. But I find it entirely plausible that he wouldn’t want that information and people around the team would not want to bring it up to him, knowing his singular mindset.

Before I go too far down the road of football enlightenment. Cam isn’t exactly above getting upset. We’ve heard a couple “F bombs” dropped by the son of a preacher-man when he’s had to burn timeouts in the playoffs. Saying he’s in a totally peaceful place would be incorrect, and probably not the best state of mind for a quarterback whom linebackers would love to send to the locker room for some extra meditation time.

I like the matchup between Cam and Peyton in Super Bowl 50. Old school versus new school. The savvy brainiac versus the freakishly athletic guy that can also throw lasers.

The contrast between the two styles is even more apparent when you look at how they react to the game. Cam is part of the game. Finding his “flow” with each first down. Peyton is near robotic, having consumed more data on his opponent than most coaches during the week.

I know Peyton enjoys playing football, but during the game he looks like an accountant grinding out the week as April 15th quickly approaches. Cam Newton acts as if he may never get to play football again. There is no doubt in anyone’s mind he is having the time of his life during all 60 minutes.

Anything can happen in the Super Bowl. We’ve seen the favorite come out and get hammered just like what happened when Manning and Denver were supposed to roll over Seattle two years ago. Everyone is expecting the Panthers to make short work of the Broncos. But there is still a football game to be played before Cam gets his name put alongside other quarterback greats who have been fortunate enough to win a Lombardi Trophy.

The Super Bowl and the days leading up to it can be super distracting. So far Cam Newton has done a near perfect job of blocking out the noise outside the football field this year. His moment by moment approach should help his Panthers to their first Super Bowl win.

“Should” is the key word. It only takes one bad moment for momentum to swap sides as we saw with Manning missing the snap early in the Super Bowl with Seattle, and Pete Carroll spitting in the face of fate with a pass play instead of a run last year.

Newton and the Panthers have had mostly positive moments on the field all year long. It will be interesting to see how they handle living in the moment when the moment turns on them, and doesn’t involve dabbing or handing out footballs to kids in the stands.