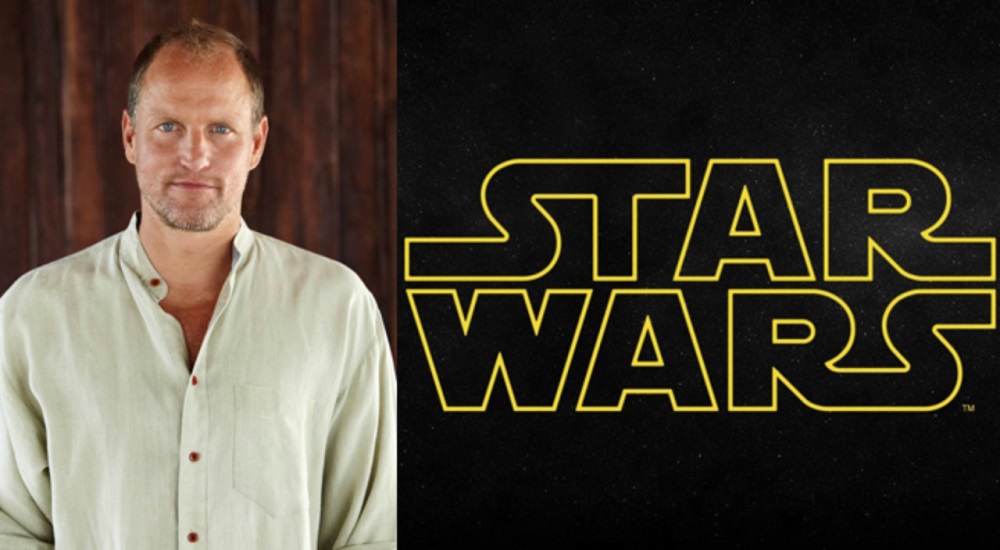 Woody Harrelson is certainly keeping busy having recently shot his truly live action film “Lost in London Live,” and on Monday, he confirmed that he’d be taking on the role of Garris Shrike in the stand-alone Hans Solo “Star Wars” movie. He did all this while promoting his latest film “Wilson” at the 2017 Sundance Film Festival.

He’s that busy shooting one film after another along with all the fun promoting that goes with it, but he really seems like he’s having a great time even though time is something he doesn’t have a lot of. He was a little hesitant about confirming the “Star Wars” news, but once he did, he let loose on his ability to lead. His character is Han Solo’s mentor. 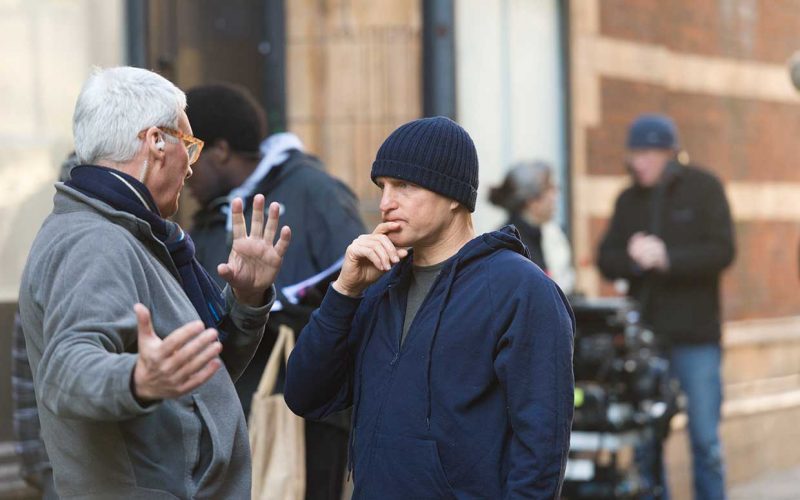 The character is a part of Star Wars’ extended universe and was first introduced in A.C. Crispin’s The Paradise Snare, which was released in May 1997. The book was the first installment in The Han Solo trilogy and introduced Shrike as the man who swept Solo up and taught him how to be a criminal, essentially.

A quick description from the book on his character gives us this:

Han Solo was a child without a past, a Corellian street urchin, abandoned, foraging for scraps of food, when the cruel Garris Shrike whisked him away to a nomadic band of spacefaring criminals. Now, years later, Han fights his way free. His goal: to become an Imperial Navy pilot. But first he needs hand-on experience flying spacecraft, and for that he takes a job on the planet Ylesia—a steaming world of religious fanaticism, illicit drugs, and alluring sensuality…where dreams are destroyed and escape is impossible.

Shrike was a young bounty hunter, but his quick temper resulted in the deaths of many criminals he was supposed to capture. Following his failings as a hunter, he turned to a life of crime, “collecting a group of orphans whom he used in confidence tricks and thefts.” Although Shrike saved Solo from a life of homelessness, he was also a cruel man who would beat the young Solo when aggravated.

The film doesn’t have a title yet.

“I wouldn’t choose me,” the actor shrugged and then laughed at the premiere of “Wilson” at the Sundance Film Festival in Park City, Utah.

It will also star Aiden Ehrenreich as Han Solo. Donald Glover will play Lando Calrissian and Emilia Clarke has been cast as well but in an unknown role. The movie is scheduled to come out on May 25, 2018.

As for “Wilson,” it’s adapted from a graphic novel of the same name about a curmudgeon, played by Harrelson, who reconnects with his long lost ex-wife, played by Laura Dern, and discovers they have a daughter he didn’t know about. 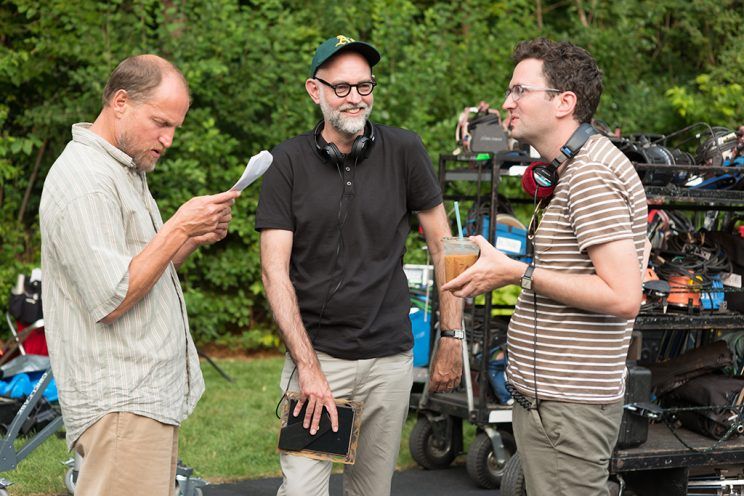 Craig Johnson, the director of “Wilson” talked about the film and working with the always busy Woody Harrelson.

For his third feature film, Craig Johnson opted to do something he’d never done before — direct a screenplay he didn’t write. Still, he didn’t step too far outside his wheelhouse, as the project he helmed is a film adaptation of Daniel Clowes’ widely admired graphic novel Wilson. Woody Harrelson takes on the title character, an unbridled dog-lover who endures a series of outrageous misadventures when he reunites with his estranged and very messy wife, Pippi (Laura Dern), and bonds with their daughter he never knew existed. As with his previous comedy The Skeleton Twins, Johnson paints a deeply felt portrait of a lonely misfit trying to navigate the strange world around him.

You seem like someone who’d be a fan of Daniel Clowes, but how did you become involved with Wilson?

Craig Johnson: It was being developed by Fox Searchlight with a different director. When that director stepped away, it was sent to me as an available script to direct. I was familiar with the graphic novel. I’m a big Dan Clowes fan and even had the graphic novel on my shelf. The second I got a script called Wilson, I thought, “Oh my gosh! Is this the Dan Clowes novel that I love?” I just dove into it, read it in about an hour, and immediately knew I wanted to do it. At the time, I was reading a bunch of scripts. It was right after my last film, The Skeleton Twins, had come out, and I was lucky enough to be getting sent a bunch of stuff. Frankly, nothing was that great. This just stood out. It was unlike any other script I read, with its sense of humor and sensibility. I just jumped on it. I said, “Who do I have to kill to direct this?”

Since you typically direct your own scripts, what specifically was so appealing about this one?

It started with Dan Clowes. I was a fan of how he sees the world. It’s a bit of a shared sensibility in that we both have a lot of the misfit and outsider and the weird prickly people you don’t usually see movies about. It’s true that up to this point I’d only directed things I’d written. That was never a hard and fast rule for me. If something comes across and my voice as a director merges with the writing, I’m happy to take it on.

How different is the directing process when you’re working from another writer’s script?

In some ways, for better or worse, there’s more distance. You’re seeing it slightly at arm’s length, which can be helpful. Sometimes there’s a danger when you direct your own stuff that you can become precious about it and cling on to things that don’t serve the movie as a whole just because you love them. If it’s not your material, you can have more objectivity that will result in a stronger version of the movie.

How did you get along with Daniel during your collaboration?

It was a fantastic collaboration. I adore that man. He is a real sweetheart, which may surprise some people since he’s associated with misanthropic characters. He doesn’t suffer fools easily, but he really has a tremendously big heart and is interested in [people] that are easy to dismiss. That’s actually every character in Wilson.

Many of the events in Wilson’s life are tragic, but you find the comedy in them. How do you achieve such a balance?

The real key to the whole piece is striking that balance between the hilarious and the heartbreaking. Yes, there are a lot of heartbreaking events in his life, but I think it has a lot to do with Wilson’s attitude toward them. He’s undaunted. He’s not going to let anything knock him down. He’s the perfect example of someone who gets back on the horse. He does pass through something in his journey, whether it be a bit more self-awareness or a better sense of how to interact with the world. Yet he doesn’t give up his essential Wilson-ness. I think it’s the character that allows you to take these tragic events and see the comedic value in them.

This was such a wonderful and expansive role for Woody Harrelson. Dating back to his time on Cheers, no matter the role he plays his persona is that of a very likable guy. What did you see in him that made him the right choice to play a misanthrope?

He has such an inherent likability, which is why he gets cast as villainous characters. You just can’t stay mad at Woody for long. You will accept him as a serial killer or psychopath or as Wilson. Certain actors just have this presence and this warmth to them. We knew that Wilson needed warmth to him. The character is rough. He’s a difficult guy, but he’s funny and says things that make your jaw drop. That’s great for a graphic novel you can read in 20 minutes, but for an hour-and-a-half movie you need to latch onto something a bit more human in the character. Woody brings that humanity naturally.

As Pippi, Wilson’s messy estranged wife, Laura Dern has added another wonderfully eccentric portrayal to her résumé. How did you decide to cast her?

We wanted a Pippi that had a little more spark to her. When we thought of a Laura Dern version of her, this whole new Pippi came to light. I like to think that when Wilson and Pippi were dating 17 years before the start of the movie, there was this youthful volatility to them. It would have been the late ’80s, early ’90s, and I imagined Pippi as this ex-Van Halen groupie, involved in drugs with this hot temper — explosively volatile person. It just felt like the right Pippi for the Woody version of Wilson. Nobody does unhinged like Laura Dern. She can break your heart too. It’s not just a crazy person losing her mind. It’s a real human being who’s got her heart on her sleeve as well as your anger on her other sleeve. You can see her shift within a frame. She’s probably got the most expressive face of any actress I’ve ever worked with — just the way her mouth will curl up if she’s pissed off or the way her eyes will melt if she’s moved by something. It’s the magic of a brilliant actor.

For your previous film, The Skeleton Twins, you won the Waldo Salt Screenwriting Award. What effect did it have on your career?

I’m literally staring at the award right now in my living room. When you start out as a filmmaker you spend a bit of time feeling like a fraud, like you’re illegitimate on some level and you don’t really know what you’re doing. To win a screenwriting award functions as a way to legitimize myself — maybe I’m not just kidding myself and I have a knack for this. Certainly, career-wise, it’s helped me tremendously. People are aware of it and it’s helped me get writing and directing gigs.

Wilson has already been set for theatrical release by Fox Searchlight. How does this change your Sundance experience?

It removes a giant cloud of existential angst, that’s for sure. [Laughs] I’m just hoping I don’t try to fill up that space with angst about something else. My hope is to go into the Festival and look at it as a celebration of the film. I’m happy to present it to the world and share it with people. I’m going to enjoy that aspect without wondering if the cow is going to sell at the market. It’s a rarified position to be in, so I’m not taking it for granted for a second.