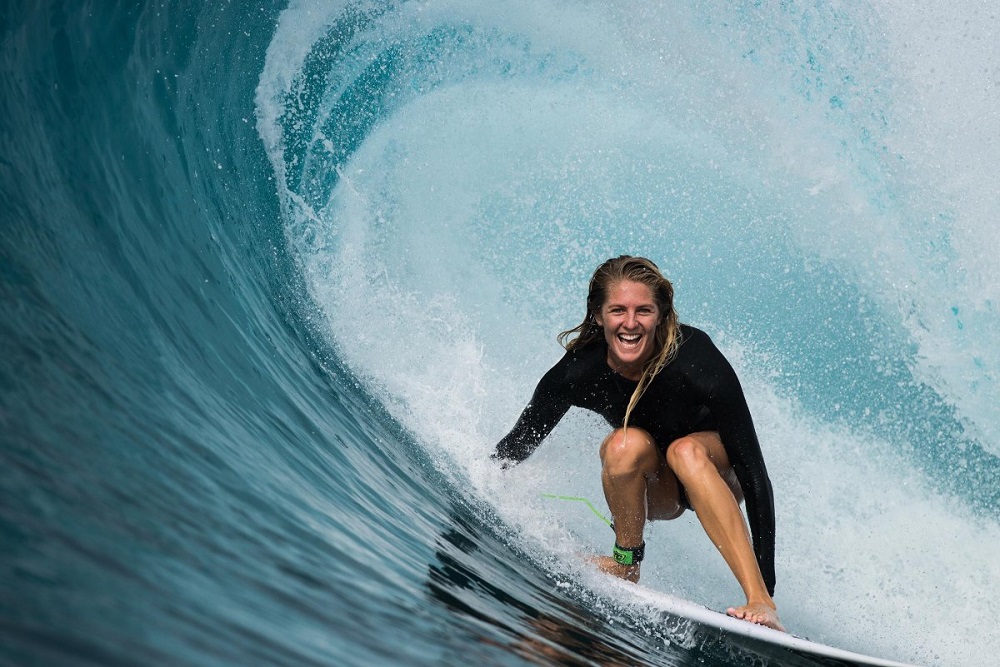 While many are focusing on how the upcoming Olympics could change surfing, Australia’s Stephanie Gilmore has her eyes set on something much bigger and meaningful.

Gilmore, who is talked about as possibly the greatest athlete of all time in her sport, takes pride in being on the ground floor in the fight for a prize that could have a longer-lasting impact: equal pay for women on the professional tour where she and her rivals make their living.

The World Surf League put itself in rare company earlier this year with its decision to begin paying women the same as men, starting in 2019. While the majors and a few other tournaments in tennis have committed to paying women and men equal prize money, the WSL is the first U.S.-based global sports league to make that move.

The fight for equal pay begun decades ago by Billie Jean King on the tennis courts — and still waged daily in corporations across America that have nothing to do with sports — has found a toehold on the beach.

“Sports are the perfect platform to show equality,” Gilmore said last week, after capturing her record-tying seventh season title. “In most workplaces, what people make is completely private. In ours, the prize money is public knowledge.”

“Surfing was not a career path,” Slater recalled of his youth, in the HBO surf documentary “Momentum Generation.” ″It was just something you enjoyed doing.”

Especially so for the women. And even next year, when women and men are both expected to make around $100,000 for a victory (men made $100,000 and women $65,000 in 2018), it’s hard for anyone but those at the very top to get rich riding waves. Competitions are only a piece of the puzzle. Sponsorships, filming, and free-surfing make up the rest.

Could the Olympics change that?

It’s a debate coursing through the sport that is now experiencing some of the same growing pains as other so-called “lifestyle” sports — namely, snowboarding — two decades after their counter-culture vibe was welcomed into the stiff-suited, tradition-bound world of the Olympics. For the most part, snowboarders have accepted the Olympics and benefited from the platform it provides.

“It’s definitely new territory, and some people are a little unsure about it,” Gilmore said. “They think it’s not authentic surfing. I think it’s kind of cool. I grew up watching (Australian 400-meter sprint champion) Cathy Freeman, thinking ‘I want to go to the Olympics.’ But I thought that, as a surfer, I’d never get that chance.”

Gilmore grew up only 400 meters (1,300 feet) from the beach. Her father loved surfing, and Gilmore and her sisters “really had no choice” but to learn how to ride, she said. By the time she was 11, she knew this was what she wanted to do for a living.

The moment that triggered the run to her seventh world title came at the same beach where she learned how to surf.

Gilmore finished a disappointing fifth in this year’s season-opening event, the Roxy Pro Gold Coast in Queensland, Australia. Three years had passed since her last season title, and, she conceded, some doubt was starting to creep into her mind as to whether her best days were behind her.

“It sort of killed the confidence and made me think, ‘Do you still want this? Do you still have it?’” Gilmore said. “I got quite overwhelmingly emotional. And that’s when I realized, ‘You obviously still really care about this.’”

Gilmore refocused. She won three events in 2018 and finished second in three more. After the season’s final event in Maui last week, she had captured her seventh title, which ties her with another Australian, Layne Beachley, for the most for a woman. (The title came with a $150,000 bonus.) Only Slater, with 11, has more.

Already a household name among surfing fans and her peers, an Olympic gold medal would clearly go a long way toward expanding Gilmore’s reach.

In many ways, though, she has already sent quite a powerful message.

“Women like Stephanie are competing in the same conditions, on same waves, showing the same bravery as the men,” said the WSL’s CEO, Sophie Goldschmidt. “It’s incredibly inspiring. They are positive role models, pushing boundaries and gaining audiences. But it’s not where it should be. There’s still room to grow.”