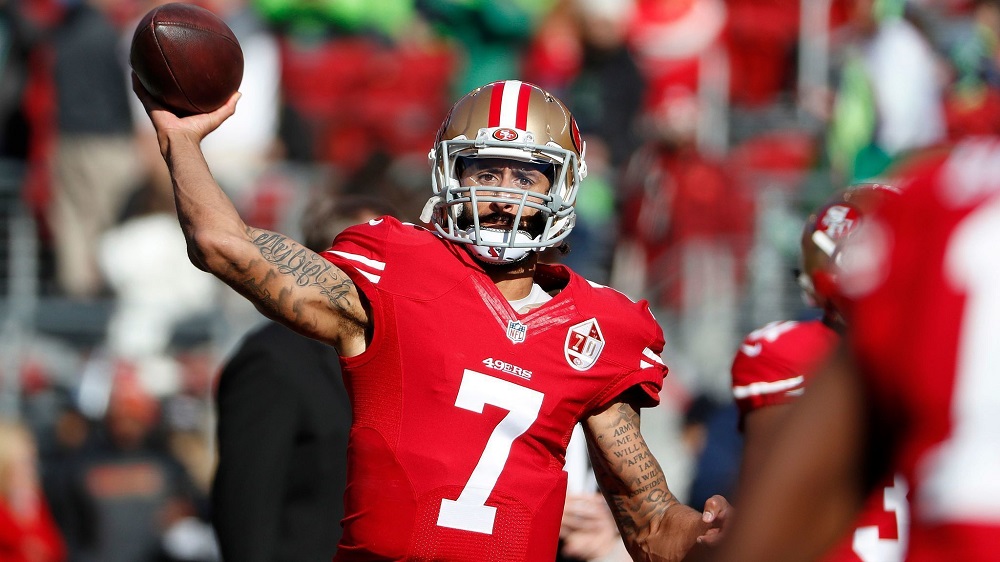 ESPN reported that the Baltimore Ravens head coach John Harbaugh and general manager Ozzie Newsome were onboard to sign free-agent quarterback Colin Kaepernick, but it was owner Steve Bisciotti who had cold feet. Within an hour of that report, the Ravens responded quickly to diffuse that claim.

We are going through a process, and we have not made a decision,” Ravens general manager Ozzie Newsome said in a statement. “Steve Bisciotti has not told us we cannot sign Colin Kaepernick, nor has he blocked the move. Whoever is making those claims is wrong.”

The Baltimore Raves are weighing all these factors – and then some – as they continue to wrestle with the decision whether to sign free agent quarterback Colin Kaepernick.

It’s been a week since Ravens coach John Harbaugh floated the idea of adding Kaepernick, a veteran with Super Bowl experience and the baggage that comes from his decision last year to literally sit out the national anthem on game day.

The topic of Kaepernick came up on the first day of training camp because Flacco, the team’s starter for the past nine seasons, arrived with a bad back. Flacco still hasn’t taken a snap, though he insists he’s on the mend.

Kaepernick remains an option, particularly since backup Ryan Mallett has not performed well in practice. One problem is the Ravens face in signing Kaepernick is they don’t have much space under the salary cap and still have plenty of holes to fill, including on a porous offense line.

But the biggest challenge for the Ravens is gauging the potential backlash that might be created by signing a player who gained widespread attention last year for his decision to sit – then eventually kneel -during the national anthem to protest police brutality and racial injustice.

So, the Ravens will weigh all their options before deciding if Kaepernick is worth the money.

“It’s all linked,” Harbaugh said. “People want to draw big broad lines about, ‘It’s about this’ or ‘about that,’ but it’s never one thing. So, we’ll just have to see where it goes and try to do the best thing for our football team, organization, and everything.”

Ravens owner Steve Bisciotti has interviewed current and former players on the topic, including retired linebacker Ray Lewis and tight end Benjamin Watson, now in his second year with the team.

“I was surprised mainly because I don’t get a vote,” Watson said Wednesday after practice. “This organization will make decisions for all the guys on the field right now. It’s about: Can he help us win games?

“The biggest thing they have to decide is, is he a good fit for our football team? I would hope that any team, when it comes to Colin Kaepernick, would look at his skill and look at their needs and say, ‘OK, I’m going to give him an opportunity because I have a need in that area and he can fill it.’ Nothing else.”

That’s one of the most important facets among the litany of items the Ravens are considering, but Bisciotti contends that Kaepernick’s protest last season – along with the quarterback’s assertion that he will stand for the Star-Spangled Banner this year – cannot be ignored.

“Non-violent protesting is something that we’ve all embraced,” Bisciotti said. “I don’t like the way he did it. I liked it a lot more when he went from sitting to kneeling. I thought that if it’s still a silent protest, the level of disrespect isn’t as strong that way.”

He wonders if the fans would be able to look past the protest and consider that the 29-year-old Kaepernick threw 16 touchdown passes against only four interceptions last year, and that his lifetime numbers in those categories are 72 TDs and just 30 INTs.

“I hope we do what is best for the team and balance that with what’s best for our fans,” Bisciotti said.

The subject has transcended football in the Baltimore area. All four Letters to the Editor in the Wednesday edition of The (Baltimore) Sun involved opinions of the potential signing of Kaepernick (three in favor of it; one against).

Watson asks only that the Ravens first judge Kaepernick on his ability to throw the ball downfield, make accurate decisions and provide the plays necessary to help the team make some noise in the AFC North.

“That’s the respect you want as a player,” Watson said. “Don’t get me wrong, all the other stuff is important. But when it comes to football, the reason why we call sports the equalizer is because you can come in here and have a different view, but if you can perform and are respectful, then you can have a chance.”