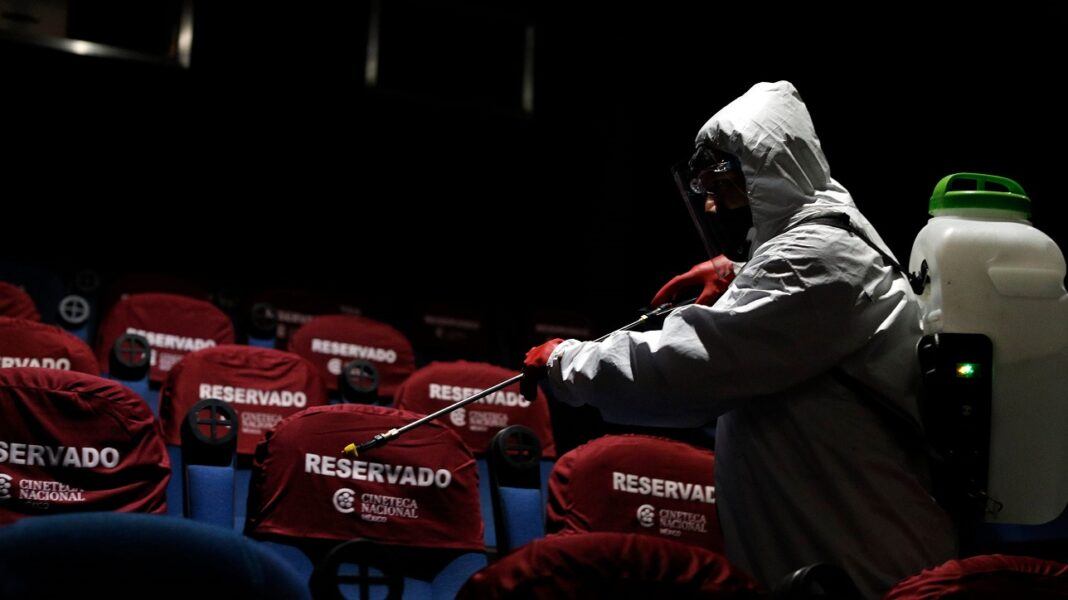 Theater chains have been fighting to stay afloat during the pandemic, but will the results from Mexico City opening their movie theaters to barely any customers force AMC to rethink it’s August opening?

Many have already decried AMC slashing prices to just 15 cents; the cost of a movie ticket in 1920. History shows that during that time, the world was still reeling from the Spanish flu pandemic.

It turned out to be very few brave souls who returned this week to movie theaters in Mexico City that had been closed for four months due to the coronavirus pandemic.

Yes, there was popcorn. But movie goers had to wear face masks, and could only lift them to eat or drink. And their temperatures were checked at the entrance. They also had to walk on a sanitizing mat.

Dates were okay, but forget about sitting with a group of friends: no more than two people were allowed to sit together, as long as they were surrounded by empty seats.

Theaters in the capital have been allowed to open at only 30% of capacity — entire rows were blocked off with yellow tape — but even so there was no competition for the best seats.

At an IMAX screen in Mexico City, only about 10 customers showed up Wednesday, but technical problems with a projector put off the scheduled screening of the 2014 space drama “Interstellar.”

“It felt great to be able to come back, “said Matías Mora. “For me, seeing a film in a movie theater is the definitive way to see it.”

Return Of the Classics

With new movie premieres delayed by worldwide lockdowns and theaters scrambling to find something to show, the pandemic has at least brought back the classics.

Antonio Alamillo, 47, a bakery manager, and Nélida Cartujano, 42, a teacher, came to see the 1955 James Dean classic “Rebel Without a Cause.”

“I was here on the last day the theaters were open and here I am on the first day they opened again,” said Alamillo. “I can’t live without the cinema.”

Movie theaters in Mexico sold about 350 million tickets, making Mexico the fourth largest movie market in the world, after China, India and the United States. In terms of revenues, Mexico was in ninth place, with ticket sales worth about $850 million in 2019. The country has relatively low ticket prices.

But the movie theater business chamber, Canacine, estimates Mexican movie houses lost about 152 million ticket sales during the shutdown, which lasted from March 25 to August 10. At least a dozen movie theaters across the country have announced they will close permanently.

Mexico’s Culture Secretary, Alejandra Frausto, was at one of the first showings at Mexico City’s Cineteca Nacional complex.

“A moment like this, returning to the movies, seemed impossible,” Frausto said. “But that is precisely what art does, make the impossible possible.”

AMC Theatres, the nation’s largest movie theater chain, will reopen in the U.S. on Aug. 20 with retro ticket prices of 15 cents per movie.

AMC Entertainment, which owns the chain, said Thursday that it expects to open the doors to more than 100 cinemas — or about a sixth of its nationwide locations — on Aug. 20 with throwback pricing for a day.

AMC theaters have reopened in numerous international countries but have remained shuttered in the U.S. since March. The chain touted the reopening as “Movies in 2020 at 1920 Prices.”

After several false starts due to a summer rise in coronavirus cases throughout much of the U.S., widespread moviegoing is currently set to resume in late August. Regal Cinemas, the second largest chain, is to reopen some U.S. locations on Aug. 21.

During its opening-day promotion, AMC will show catalog films, including “Ghostbusters,” “Black Panther,” “Back to the Future” and “Grease.” Those older films will continue to play afterward for $5.

AMC confirmed that Disney’s much-delayed “New Mutants” will debut in theaters Aug. 28, with Christopher Nolan’s “Tenet” to follow Sept. 3. Warner Bros. is planning to release “Tenet” a week earlier internationally, including in Canada. A handful of smaller new releases are also planned for late August, including “Unhinged,” a thriller from Solstice Studios with Russell Crowe; and Armando Iannucci’s “Personal History of David Copperfield,” from Disney’s Fox Searchlight.

AMC said Thursday is expects about two thirds of its theaters will be open in time for “Tenet.” Several states, including California and New York, are yet to allow movie theaters to reopen.

One notable absence from AMC’s reopening lineup of films is Disney’s “Mulan.” Disney announced earlier this month that the remake of the 1998 animated classic would hit theaters and Disney+ on September 4.

AMC and other chains have said they will operate at reduced capacity to facilitate social distancing, along with increased theater cleaning and required mask wearing.