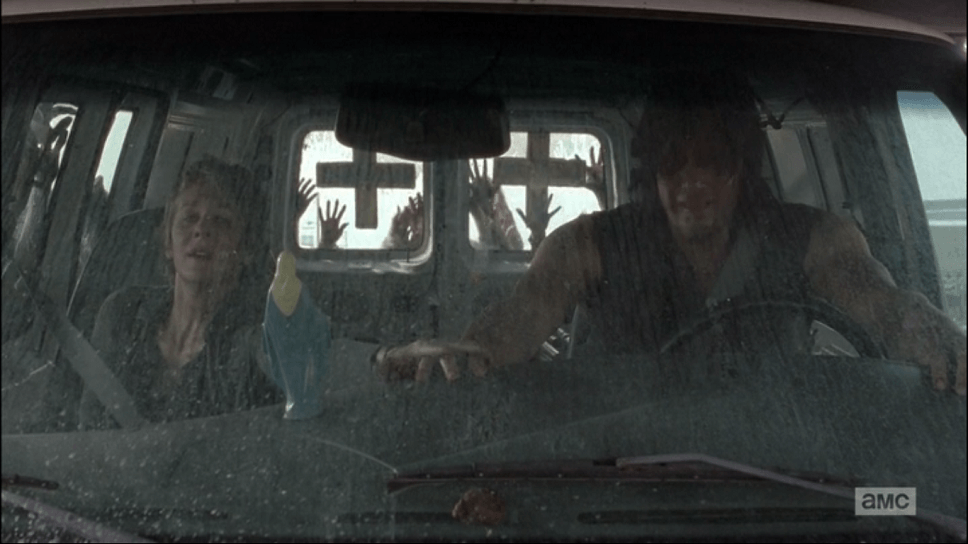 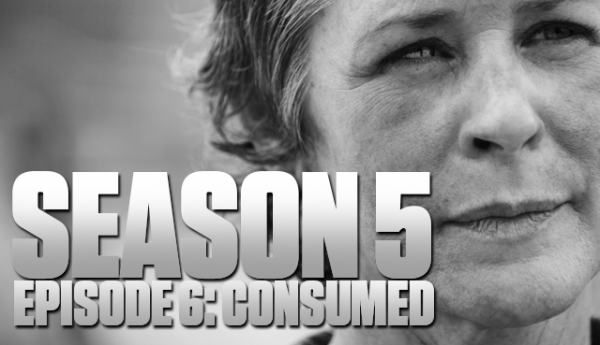 I have to say that this week’s episode of The Walking Dead was close to the best of this season. It was certainly much better than last week’s viewing. They opened with Carol in a flashback to when she drove away from Rick after he exiled her for a couple of prison “murders.” She actually did the right thing back then, but Sheriff Rick disagreed and sent her on her way. She rode off with a strong prideful look, a big departure from the abused wife she started out as in season one. The next cut shows her sobbing as she realizes she is all alone in an insane world. A walker smacking on her car window certainly didn’t help matters as she had her five o’clock traffic-like meltdown.

We get another doomsday prepper tip as we watch Carol find a safe haven. Insomnia is likely common in a zombie apocalypse so she has time to think of ways to survive as she fastens ziplock bags on coat hangers to catch rain.

The next scene jumps to where Daryl catches Carol trying to skip out on the church group and they start pursuing the white cross car to save Beth. They follow  with no lights on up I-85, which would no no easy feat with debris everywhere and wrecked out cars to boot. They stop as they see one of the hospital’s cops dragging a woman into their car. It is impossible for me to believe that the guys in the white cross car, cops mind you, did not notice them following. Even with no lights, a car that was following you would be pretty noticeable to nervous survivors in this world.

Daryl and Carol are out of fuel and lose the cops so they must find a place to hold up. They head to the safe house in which Carol spent her time in exile. She shows her efficiency as a killer as she stabs a walker in the head by cracking the window just enough. We knew she was an efficient killer already from her prison murders. She killed those zombies even before they were actually close to becoming undead. Knives are becoming more popular as weapons and this will continue as guns are used less and less to stay silent. And low ammo in the world could be a theme adopted from the comics as well.

Once Daryl and Carol shack up for the night, in separate bunk beds, they have some deep conversations about starting over. they talk about the people they used to be. Once again there is a zombie at the glass windowed doors. Simply more shots of the undead as nuisances more than threats. Then we see the flashback of Carol and Tyreese burying the sisters, which was pretty harsh to watch.

Carol and Daryl head out the next morning to get to a tall building to scout downtown Atlanta. The ATL is a hot mess and I can only compare its filthiness to current day New Orleans, but more civilized. One of the craziest things ever on this show was the camping hell scene in the building. These poor bastards got infected and turned while inside zipped up tents and sleeping bags. Imagine the misery of being unable to free yourself from a freaking tent or a tight sleeping bag. 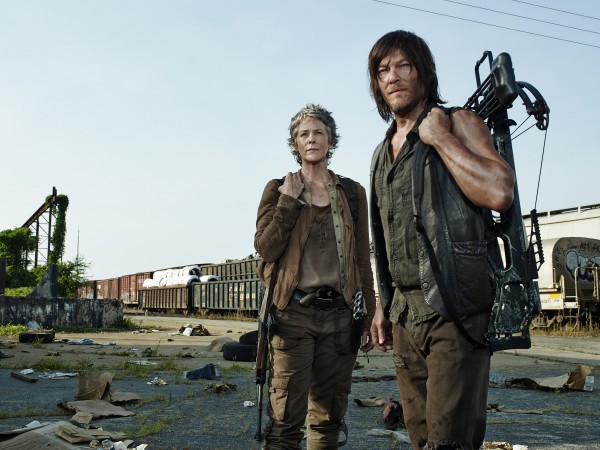 The Daryl and Carol show continues to the top office in the building where they take a gander at the destruction of downtown Atlanta. They spot a van they want to check out and off they go. No GPS or nothing. How many of us so dependent on GPS could have found that van once we got on ground level? Good thing Daryl Dixon is an old school hunter with a sense of direction. Bad thing that they got caught slipping coming through some chained doors. State hospital escapee Noah, snatches Carol’s gun and gets the drop on Daryl as well. Pretty good for a skinny kid against these stone cold killers. Noah just wants their weapons but frees the tent rotters to stall the D & C duo. That was a poor effort as the two person wrecking crew made short work of the walkers and Carol was about to pop Noah with her pistol. Daryl stopped her from hitting him since Noah did show them mercy when he could have easily whacked them. Carol’s goal is to live, period. The flashback to the prison murder victims on fire is very timely. 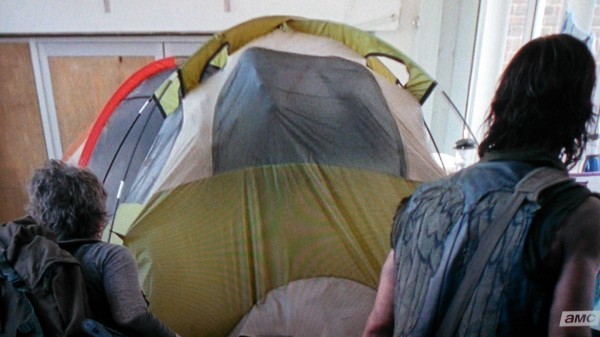 Once Daryl and Carol get to the van hanging off the bridge, they quickly find out the info they need about the hospital. But of course about 40 walkers can fuck up any small victory. Mr. Dixon, not to be stopped by small packs of undead flesh eaters, tells Carol to buckle up as they wait for the van to get sent over the edge of the bridge….and it does. Nice move, except for Carol injuring her shoulder. No air bags on this model van apparently. The zombies falling off the bridge onto the top of the van was pretty cool as we only hear it and see the van shake from the impact.

The duo makes it closer to Grady Memorial Hospital where the two once again discuss their transformations. Carol speaks about going from victim of her pathetic excuse for a husband, to protector at the prison when she did what she had to with no fear. She talks about losing her daughter and that memory being burned away and how she too will be eventually burnt up by this world. But Daryl reminds her that they are “not ashes yet.” Oh and Carol needs a doctor as her shoulder is really jacked up. 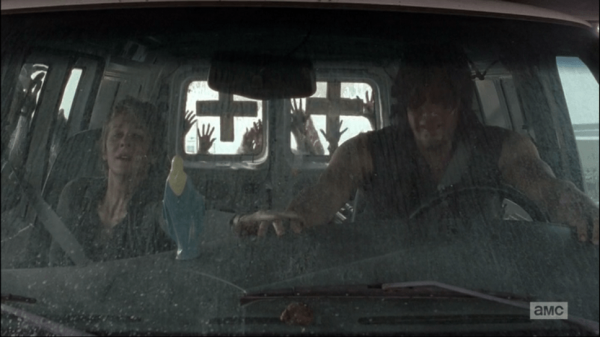 The two find Noah again as he is trying to block a doorway with a bookshelf. The young guy is rocked by Daryl as the bookcase topples on top of Noah with a walker barely caught in the doorway. Carol was nearly killed by a walker on the way to Noah, so Daryl is in no mood for more mercy upon Noah. Once was enough. But Carol has thought better of it and it leads to a Clint Eastwood type shot from Daryl’s crossbow with lit cigarette hanging from his lips. Cool kill of the week, no doubt.

Once they get a panic stricken Noah up on his feet, he is ready to bounce. But he reveals that he knows Beth after being held back by Daryl. Small world indeed. The three head out to the bottom floor of the building on the way to hopefully save Beth. Tiny problem. Carol, known jaywalker, gets rammed by the psycho cops’ car. That is how she ended up on the stretcher two episodes back. Noah convinces Daryl that she is being nabbed by the best possible evil people. They have doctors at their hold up, so she will be just fine. Strange logic that worked on Daryl and myself. Although it would be hard to watch a band of evil-doers tote off a loved one on the off chance that you can get them back before serious harm happens. 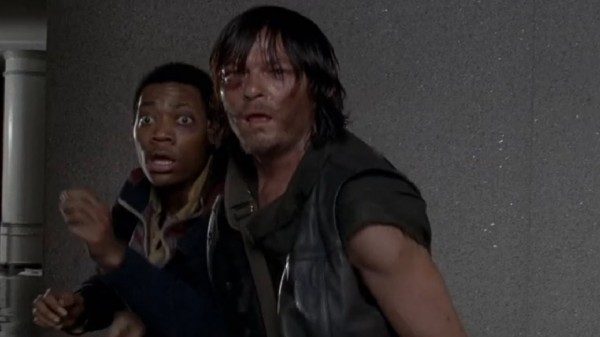 Noah tells Daryl that it won’t be easy to get through the defenses at the hospital. Big D says he has the guns and people necessary for the task and they head off to find Rick’s crew. Hopefully they don’t enlist the help of Abraham’s group. They are a train wreck and not up for the mission after their meltdown last week. 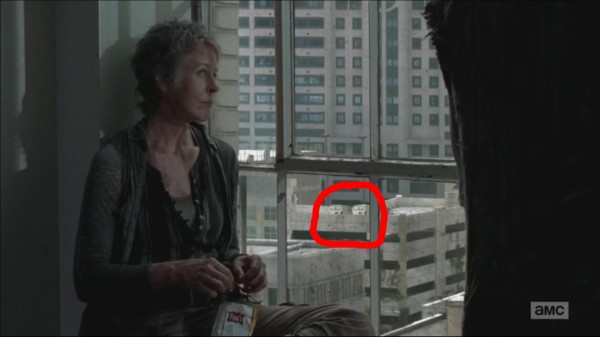 One thing you can check out that The Walking Dead editors missed is the picture above with Carol looking out the window. There’s a red circle around them to make it easier, but you’ll see two ambulances on top of a parking garage. The team said that it took four of those vans to perform the stunt so there were two of them just ready for some intense Carol and Daryl ala Thelma and Louise action to hit.