Do you really need an excuse to test out The Walking Dead Blood Orange IPA by the Terrapin Brewery in Athens, Georgia?

If so, I’ll give you a few excuses in a minute. In case your wife feels like you are over budget for the year on alcohol already.

This isn’t the first year that Terrapin has made this powerful IPA available. It is the first time that the blood orange concoction has been produced in cans.

That makes shipping a little easier for those who can’t get the beer locally. You’re not supposed to ship alcohol through the mail, but there are certainly folks who do just that.

Maybe check with your libertarian bro-in-law near the ATL who’s not afraid to break some rules.

Or if you simply want to collect the can, try eBay. There should be some TWD beer cans up for auction there.

I had the chance to try Terrapin’s limited time brew last night. Even if the beer would have been average, the can is worth collecting. The artwork Terrapin uses on all their packaging is amazing.

Of course, this IPA was not just average. I don’t meet many versions of Terrapin beer that are not memorable.

This local brewery isn’t for light beer folks who basically drink beer to stay hydrated.  Terrapin beer is for grown men and women who actually like their beer to taste like beer.

The Walking Dead Blood Orange IPA is top notch. It’s not as hoppy as Hopsecutioner but has more flavor than Terrapin’s Rye Pale Ale.

As for it being in a can, you beer snobs can pour it in a glass. A lesson I’ve learned over the past year after seeing how many epic craft beers I had missed out on simply because it wasn’t in a bottle. 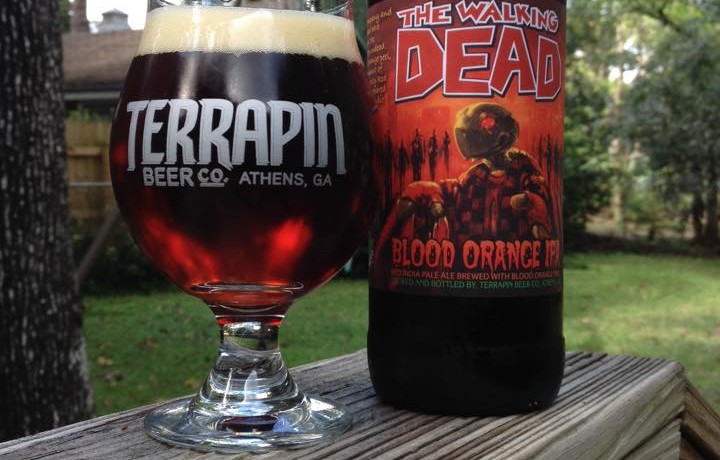 One reason Terrapin was able to partner with Robert Kirkman is the fact that the brewery is in Georgia, where TWD is filmed.

If you’re not in Georgia you may still have a shot at this zombie fuel. Just check Terrapin’s list of distributors on their website.

As for excuses to add something new to your beer world, here’s some to convince your better half.

– You only live once. Or twice if you get bitten by a walker. But no zombie in history has been able to pop a top on a beer can.

– TWD won’t be around forever even though it’s hard to see such a successful show coming to an end. All good things must do so, however. You best enjoy every connection to the show you can if you are a true fanatic. That doesn’t mean buying TWD themed lotto tickets. We’ve got enough zombie scratchers clogging up convenience stores already.

– Maybe it will take The Walking Dead hooking up with a small brewery for you to ever try a craft beer. No need for me to beat you over the head with Lucille. If this zombie-themed beer saves just a handful of people from a dismal life of light beer only, then this Terrapin partnership lived up to its potential.