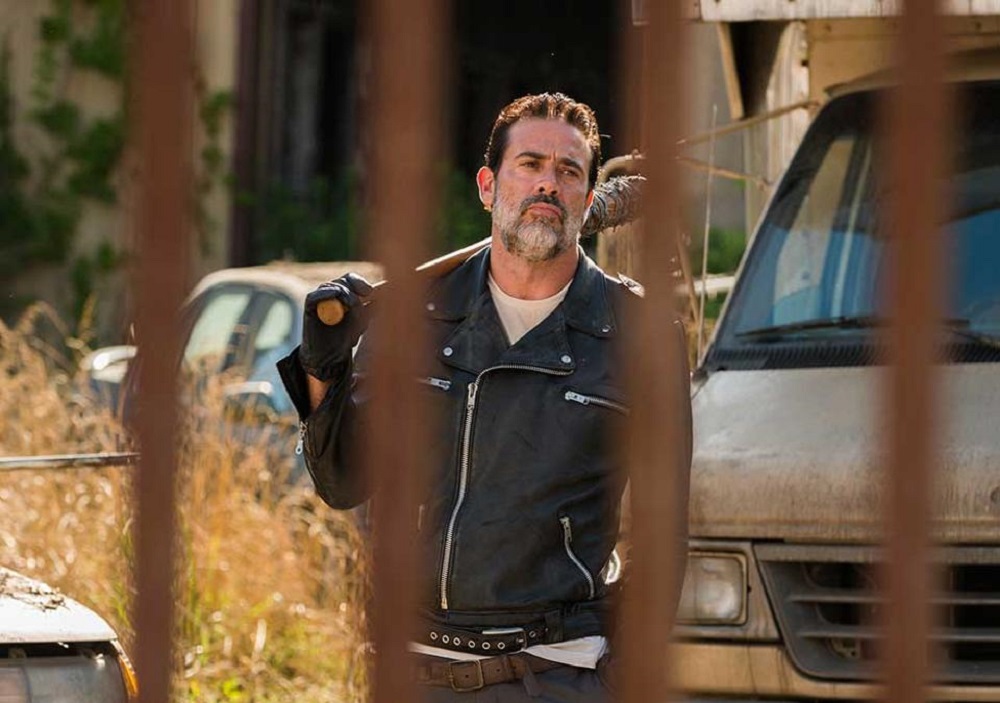 The first few minutes of The Walking Dead‘s Service told me a lot about the vibe in Alexandria. People are a bit frazzled. That will happen when a homicidal dictator is now in charge of your community.

We’ve seen our band of survivors overcome other groups, but this time around on The Walking Dead, things seem a bit hopeless. 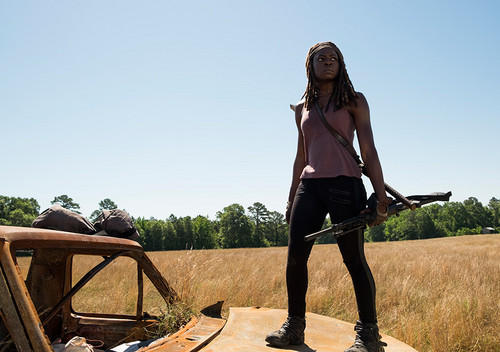 – Michonne is trying out for sniper school but is a long way from graduating.

– Eugene appears as useless as ever as he works on a radio for the Saviors. Rosita is none too impressed and looks like she might slug the geek.

– And Rick looks like he’s in a deep depression and trying to sleep all day long as he wakes up beside a disgruntled Michonne.

We as viewers were wrong if we thought the Saviors would roll into Alexandria and politely take the offerings of Team Grimes, then leave.

Nope. This first pickup was a big production with Negan wanting to further embarrass Rick as their leader, and show everyone how futile it would be to resist.

The best line of the night, not from Negan, came when Spencer asked, “Who are you?,” as Negan stood at the gate, Lucille in hand.

The Saviors took way more than even Rick had bargained for. They showed up early as well. Ruthless groups tend to go overboard. Genghis Khan was notorious for being early to genocide campaigns back when he was stacking human bones as high as foothills.

Rosita gets treated extra mean by Dwight, and she’s forced to go get Daryl’s motorcycle for Dwight. This little task would pay off for her in the end, though.

If Father Gabriel hadn’t redeemed himself in your eyes before episode 4, he had to win you over by protecting Maggie from Negan. Telling him she is dead was a great plan to protect her from being hauled off as a trophy wife. Negan seems to get off on things like taking the women of guys who end up on the business end of Lucille.

Life got harder for Grimes Co. when Carl got the bright idea to pull a gun on one of the home invaders. Negan decided the group was too emotional to have guns on the property, so he took them all.

These little outbursts by members of Rick’s crew only make them weaker in the long run. They seem heroic, but the timing is off to make any real impact. Rick may be Negan’s bitch at the moment, but it’s the only play that will work in the long run.

Spencer gets outed as a punk when two guns are missing from the inventory. Rick eventually finds them in Spencer’s house along with some booze and canned goods. 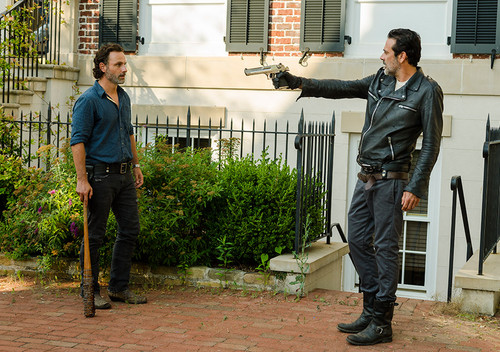 Rick had the meeting we saw previewed last week, in order to tell each citizen of Alexandria that this was their new life if they intended to survive. And to answer the gentleman’s question about why Negan would care about two little guns missing….The guy wants full compliance. The guns weren’t the issue. He wants his orders followed fully.

Rick sees this, and that’s why he hands over Michonne’s deer rifle. He may be sleeping alone for a few nights, but he knows he has to gain some trust with the ruthless maniac. And giving up a gun that Negan would never have known about was a way to show compliance.

This didn’t win a chance to have Daryl stay in the city, though. The prisoner wouldn’t even speak when Negan asked him about staying. Brainwashing or pride?

Or one too many Alpo biscuits has left him speechless.

Daryl is tempted by Dwight once Rosita brings his bike back. “You can have it back, just say the word.”

The home invasions finally ended when Negan killed one more Walker for the road. Rick thought about bashing his head in when his back was turned, and that would have been awesome. Especially doing it with Lucille, which Negan forced him to carry the entire episode.

But as Gordon Solie used to say, “Discretion was the better part of valor on this occasion.”

Watchers of TWD have a lot more Negan to go before Rick makes any sort of power play. So buckle up for more abuse.

Rick does threaten Spencer over him hiding food and him accusing Rick of being to blame for Glenn and Abe being bashed. And Rick has to explain to Michonne his logic in handing over all the guns. She’s bitter but accepts it.

Until the next morning when she heads out for some meditation and finds all their mattresses burned up.

The Saviors didn’t even use them. Just set them on fire to show they could treat Team Grimes however they wished.

The show wrapped with Rosita asking Eugene to make her a bullet for the pistol she got from a Walker buddy of Dwight’s from last year’s shootout. 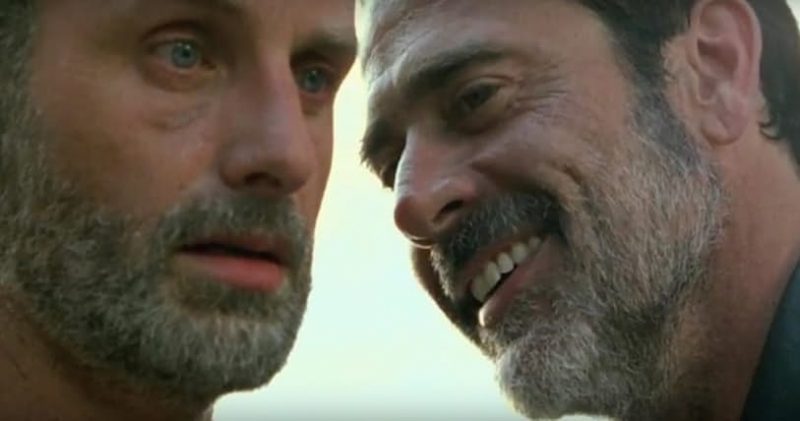 This is the point where bullets start being manufactured as a storyline.

Better get a 3D printer in order to create some guns too, since your leader just handed your stockpile over to the enemy!

See ya next week when Negan will try to top these one-liners:

– “Having a fat woman in charge of rations.”

– “Don’t be ridiculous Rick. Thank you.” (after forcing Rick to be appreciative of his generosity)

Next week on The Walking Dead, it looks like Carol and Michonne are working on a Negan plan while Rick still deals with trying to save everyone.