Home All News Tech News Understanding ‘net neutrality’ and how it affects you if it ends by... 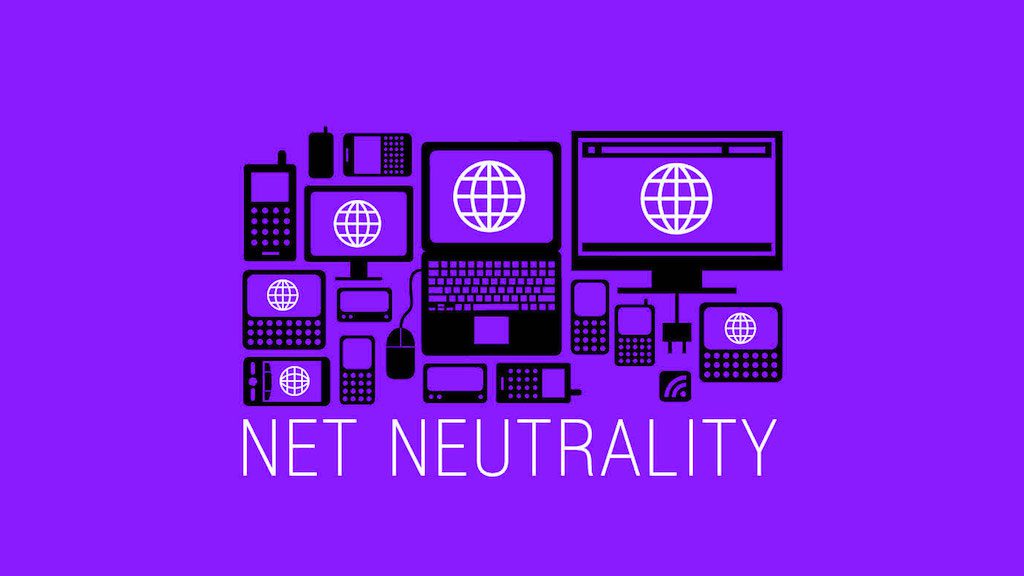 Net neutrality is back under fire from Federal Communications Commission Chairman Ajit Pai as we warned you back in May.

Back then many people still didn’t understand how net neutrality actually affects you, and it’s actually important to know, especially for those of you that use the internet…naturally that’s most of us who watch videos on it, stream music on it, read the news on it or even watch tv on it. You will be affected by Pai’s current attempt to kill it off as he’s been a very vocal opponent against it. 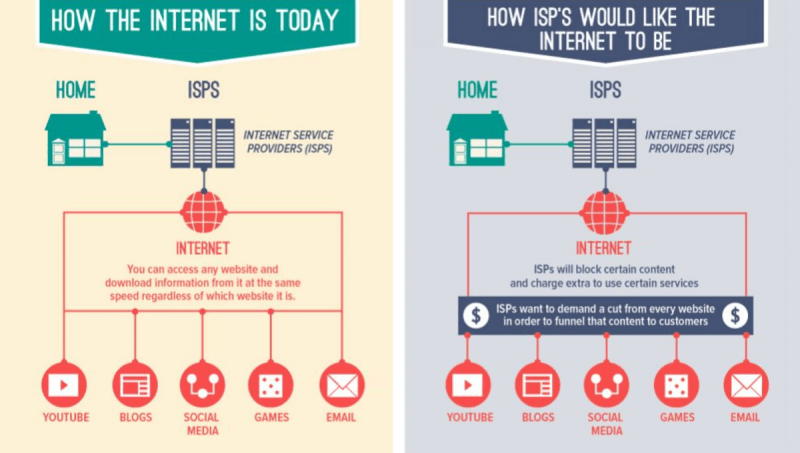 In a nutshell, the current rules regulate ISP’s like Comcast aka Xfinity (and most of their customers know what they’ll be doing), AT&T, and Verizon from favoring their own digital services of all others.

“Under my proposal, the federal government will stop micromanaging the internet,” Pai said in a statement. 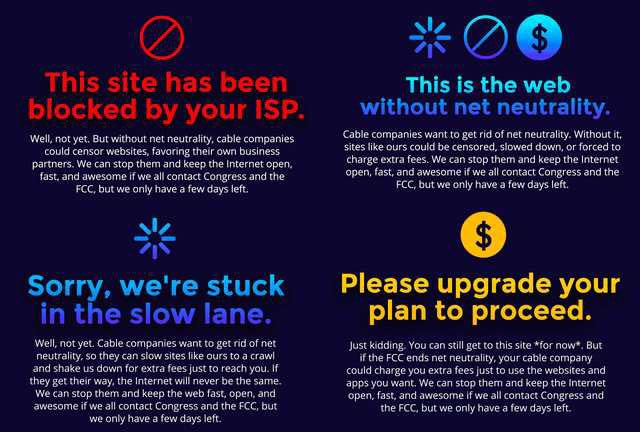 The Federal Communications Commission formally released a draft of its plan to kill net-neutrality rules, which equalized access to the internet and prevented broadband providers from favoring their own apps and services.

Now the big question is: What comes next?

If you scroll down further, you’ll find that we have 5 great ways to have your voice heard about this very important FCC rollback.

The FCC’s move will allow companies like Comcast, AT&T, and Verizon to charge internet companies for speedier access to consumers and to block outside services they don’t like. The change also axes a host of consumer protections, including privacy requirements and rules barring unfair practices that gave consumers an avenue to pursue complaints about price gouging.

FCC Chairman Ajit Pai says his plan eliminates unnecessary regulation. But many worry that his proposal will stifle small tech firms and leave ordinary citizens more at the mercy of cable and wireless companies.

“It would be a radical departure from what previous (FCC) chairs, of both parties, have done,” said Gigi Sohn, a former adviser to Tom Wheeler, the Obama-era FCC chairman who enacted the net neutrality rules now being overturned. “It would leave consumers and competition completely unprotected.”

During the last Republican administration, that of George W. Bush, FCC policy held that people should be able to see what they want on the internet and to use the services they preferred. Attempts to enshrine that net-neutrality principle in regulation never held up in court — at least until Wheeler pushed through the current rules now slated for termination.

Pai’s proposals stand a good chance of enactment at the next FCC meeting in December. But there will be lawsuits to challenge them.

The formal proposal reveals more details of the plan than were in the FCC’s Tuesday press release. For instance, if companies like Comcast, AT&T, and Verizon decide to block a particular app, throttle data speeds for a rival service or offer faster speeds to companies who pay for it, they merely need to disclose their policies for doing so.

#NetNeutrality protects access to information. We have until December 14 to tell Congress to protect a free web. https://t.co/vSkofE7HQI pic.twitter.com/WAi5tDZ5e7

The FCC also says it will pre-empt state rules on privacy and net neutrality that contradict its approach. Verizon has noted that New York has several privacy bills pending and that the California legislature has suggested coming up with its own version of net neutrality rules should the federal versions perish.

Constituents filled our voicemail over Thanksgiving weekend opposing FCC’s #NetNeutrality decision. This isn’t just a hashtag, it’s a guarantee that the internet should be open and accessible for everyone.

Broadband providers are promising to be on their best behavior. Comcast said it doesn’t and won’t block, throttle or discriminate against lawful content. AT&T said that “all major ISPs have publicly committed to preserving an open internet” and that any ISP “foolish” enough to manipulate what’s available online for customers will be “quickly and decisively called out.” Verizon said that “users should be able to access the internet when, where, and how they choose.”

Some critics don’t put much weight on those promises, noting that many providers have previously used their networks to disadvantage rivals. For example, the Associated Press in 2007 found Comcast was blocking some file-sharing. AT&T blocked Skype and other internet calling services on its network on the iPhone until 2009.

But others suggest fear of a public uproar will help restrain egregious practices such as blocking and throttling. “I’m not sure there’s any benefit to them doing that,” said Sohn. “It’s just going to get people angry at them for no good reason. They don’t monetize that.”

This is what ending #NetNeutrality will do: give big corporations the ability to control where you can go on the internet, and charge you more for services like streaming video.https://t.co/AxNw9O9gjZ

Sohn, however, suggests there’s reason to worry about more subtle forms of discrimination, such as “paid prioritization.” That’s a term for internet “fast lanes,” where companies that can afford it would pay AT&T, Verizon, and Comcast for faster or better access to consumers.

What your internet may end up looking like when the FCC kills #NetNeutrality: https://t.co/7yL5JHFP0e pic.twitter.com/ITfHDPqk5j

That would leave startups and institutions that aren’t flush with cash, like libraries or schools, relegated to slower service, said Corynne McSherry, legal director at the Electronic Frontier Foundation, a digital-rights group. In turn, startups would find it harder to attract investors, Sohn said.

Michael Cheah, general counsel of the video startup Vimeo, said broadband companies will try to lay the groundwork for a two-tiered internet — one where cash-strapped companies and services are relegated to the slow lane. To stay competitive, small companies would need to pony up for fast lanes if they could — but those costs would ultimately find their way to consumers.

The view is different at the Information Technology and Innovation Foundation, a Washington, D.C., think tank funded by Google and other established tech companies. Doug Brake, a telecom policy analyst at the foundation, said there’s little chance broadband companies will engage in “shenanigans,” given how unpopular they already are with the public.

The FCC’s case against net neutrality rests on a deliberate misrepresentation of how the internet works https://t.co/GM84w2uef6

Brake likewise played down the threat of internet fast lanes, arguing that they’ll only be useful in limited situations such as high-quality teleconferencing. Like the FCC, he argued that antitrust law can serve to deter “potentially anticompetitive” behavior by internet providers.

WHAT CAN I DO TO KEEP NET NEUTRALITY ALIVE?

Unless you don’t use the internet at all (and thus would not be reading this article), this is one to get involved in. Even in the smallest way, it’s important to make your voice, so here are a few ways you can do that.

We’ve even included links and everything to spoonfeed you how to step up so there’s really no excuse not to…unless you feel that net neutrality should be killed off.

Submit a Filing to the FCC

The most direct option is to voice your opposition straight to the FCC. To do so, just head to this website on a computer (it may not work on your phone). Under “Proceeding(s)” write “17-108″ and then fill out the rest of the form with your personal information. In the comments box at the bottom, say that you support net neutrality and Title 2 oversight of ISPs.

Unfortunately, FCC Chairman Ajit Pai has made it clear that he will disregard all filings that don’t make a legal or factual case. On top of that, there appears to be an anti-Net Neutrality bot campaign designed to counter popular support for the law. So submitting a filing may not be the most effective tool, but there are plenty of other ways to make your voice heard.

You can email all five leaders of the FCC to express your support for Net Neutrality. Here are the email addresses you need to know—the Republicans are the ones who want to dismantle Net Neutrality.

It’s possible that putting pressure on Congress could help save Net Neutrality, too. Battle for the Net has a tool at the top of its website to help you send a pre-written email to your representatives, and the Electronic Frontier Foundation has one as well. Additionally, California Senator Kamala Harris has a petition on her website where you can express your support for Net Neutrality.

Go to a Rally

Net Neutrality supporters have already organized a day of rallies across the country on December 7, just one week before the FCC votes. The events are set to take place at Verizon stores, both because the company has spent millions lobbying against Net Neutrality and because the current FCC Chairman used to be one of Verizon’s top lawyers.

You can find a list of locations here or create your own at this link. Battle For the Net is also planning drop-in events at a few politicians’ offices, which you can find here.

Finally, you can fight for Net Neutrality by teaching more people what’s at stake. If you run a website, Battle for the Net has a handy widget you can use. If not, the site also has banners and images you can share on social media and other platforms.