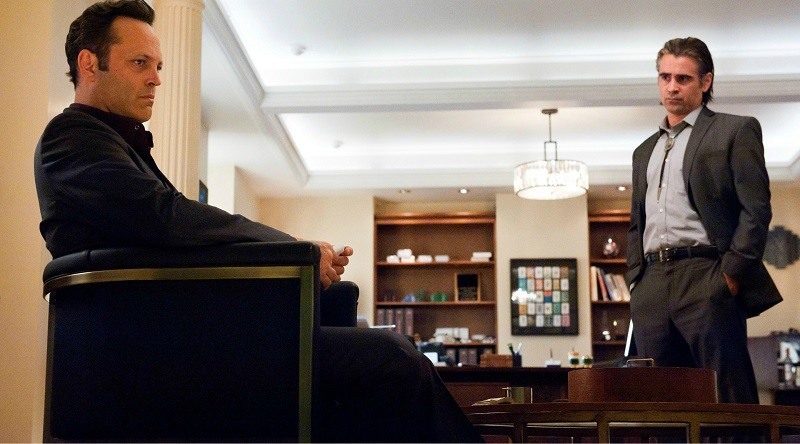 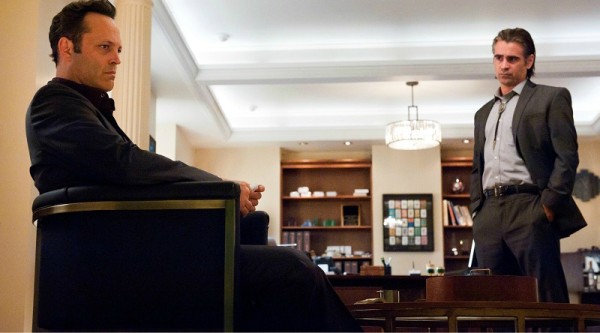 This episode of “True Detective” could have been named ‘Aftermath’, but ‘Other Lives’ wasn’t bad at all. After the bloodbath we saw last episode, our three hero detectives are not in the same roles as before the shit hit the fan. Lots of innocent blood being spilled will shake things up. Ray is now working for Frank as a consultant, Ani is doing mundane work in the evidence room, and Paul “god-warrior” Woodrugh is investigating fraud (no bike involved).

The highlight of this week’s episode may just have been Ani in group counseling for sexual harassment. She is of course the only lady there and causes quite a stir as she made a mockery of the entire thing. She was an instant hit among the other attendees who were salivating over her over-sharing.

Frank continued his rough patch as now he is dealing with associates of the former owner of his bar. A rough looking guy named Gonzalez came looking for his cut of the action so Frank had to mark his territory. Frank also told his little companion, The Cisco Kid, to move along after he lingered too long as well. Frank is putting out fires at every turn, and eventually is going to run out of hose. Speaking of hoes, his right hand man Blake, is running them out of Frank’s poker room.

The big news this week centered around the death of the head of the waste disposal company that is wrapped up in the toxic waste land that links the rail system and all the shady folks in Vinci. This is the new American Dream, wreck a plot of land with toxic waste so you can buy the surrounding area on the cheap for a high speed rail system. Google was already created so this was the next best thing for greedy business folks in Vinci.

Frank has Ray follow his right hand man Blake since he is sure the guy is back stabbing him in some fashion. We have seen very little from Blake so I’m not sure what the guy does to earn a check from Frank anyway. He is definitely running some prostitutes through the poker room.

It’s great to see Detective Velcoro off the sauce. 60 days clean. When he has his stuff together, he is a formidable character. His custody hearing with his ex didn’t do him any favors however, as he found out she is going through with the paternity test. The kid he helped raise could be officially announced as the child of his wife’s rapist. Think that won’t make you climb to the bottom of a damn bottle?

Paul lets mommy dearest know of his wedding plans. She is ecstatic and starts planning the occasion….actually this loon flips put and shows just how toxic their relationship is. Oh and Paul finds out she has taken his 20K he had stashed there. How the god-warrior thought that trailer was a safe place for more than $3, I have no idea.

Seeing Ani working the evidence room is like watching Michael Jordan coach middle school basketball. She has been sent to cop hell, but that isn’t stopping her. She gets a look at some photos that the missing girl’s mom obtains from a p.o. box. Diamonds and possibly some big name politicians are the key parts of the pics.

I’d like for Frank and his wife to make it through this debacle, but their relationship got poisoned pretty damn quick once he went back to the gutters of crime. Pimps and pushers are not appealing to Jordan Semyon even though those are the only “avenues left me” according to Frank. This character has some awesome lines.

The meeting between Ray and Ani at the live music bar is kinda weird since that is usually for the Gangster / Dirty Cop MeetUp Group. Ray tries to talk Ani down off the Casper case since no one cares, but Ani does. She is good police! She is after the truth, period. Ray changes his tune once he takes the bait from the state attorney about getting custody of his son. Ray, Ani, and Paul can all work the case from the outside since insiders can be easily compromised with all the corruption from on high. Oh and this tidbit: Ray killed the wrong guy when he was taking revenge for his wife’s rape years ago. The state attorney tells Ray about the DNA evidence that connects his wife’s rapist to a guy just caught. Damn! Frank just fed Ray a piece of trash to kill so he could get his hooks in him.

Frank shows his hunger once again as he makes idle threats to some big wheel connected to the rail system. The guy does offer to give Frank back some land to cover his losses with Casper. All he wants is the hard drive from Casper’s home. The video on that hard drive must be so disturbing we can’t even imagine it. The VHS tape from season one of True Detective was terrible to just watch Rust and Marty’s faces as they watched. Frank is gonna find that hard drive if he lives long enough. What he does with it afterward is up in the air in my mind.

Casper’s wacko doctor gets a visit from a very pissed off Ray Velcoro. This psychologist was a poor one as he missed badly on his diagnosis of Ray’s intentions to actually hurt him. Velcoro disfigured this freak in a hurry. The doc gives up intel very easily about the hookers and the mayor’s son. Apparently these high end parties were just to get dirt on high level politicians like the senator in one of Ani’s photos.

Ani is trying to get an invite to one of these whore / political parties through her sis. Meanwhile Paul is checking around on the diamonds at various jewelers. He finds out that the late Detective Teague Dixon (killed in shootout last week) had checked on the same diamonds.

Ray now has to deal with his ex thinking he made the whole thing up about killing her rapist years ago. Her comment about their “made up” family had to hurt more than the beating the doctor received earlier. It’s hard to imagine both Frank and Ray living through next week’s episode as they face off with Ray knowing how this man ruined him. The rape was enough o rip up a family, but for Frank to lie to Velcoro in order to have control of him is pretty nasty stuff. That lie ruined the man that was Ray Velcoro.

The torture room that Ani and Paul find is a bad scene. Real bad scene! The buzzards are still circling so this is a pretty fresh kill. All this is connected to the old commune and Ani’s dad somehow. I hate to see this peace seeking guy turn out to be a monster, but that’s the way this is headed.

There are just three episodes left so hang on to your hard drives, it’s going to get rocky. Season two is giving season one a hell of a run.