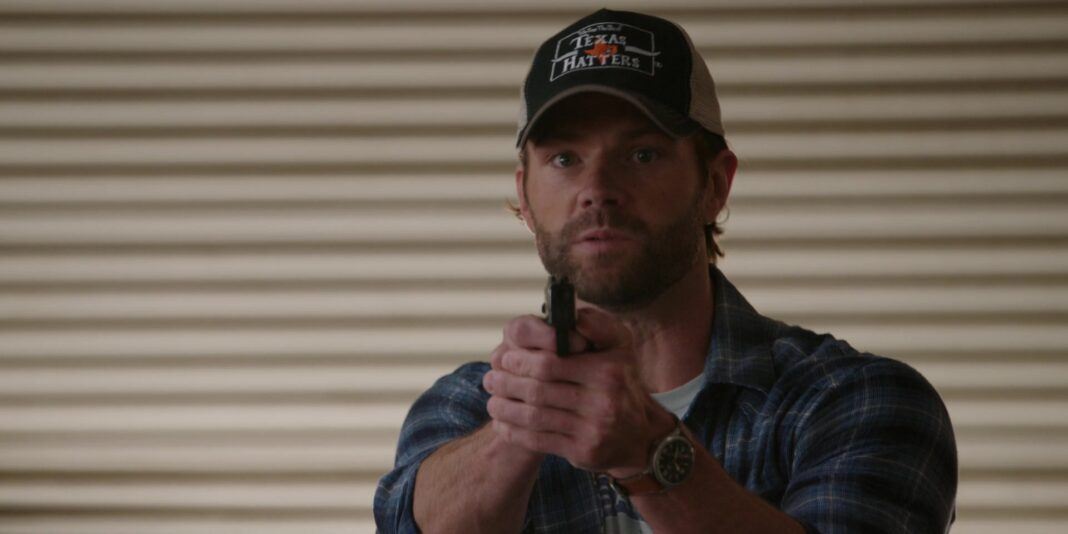 This is a slightly shorter review thanks to being at a “Supernatural” convention when last week’s episode aired and then flying back in the nick of time to dive into summer teaching, but I wanted to take a little time to process last week’s episode of “Walker.”  ‘Torn’ was aptly named, since just about everyone in it has to make some difficult choices.

Stella is torn between her current boyfriend Todd and rapidly-becoming-her-new-love Colton, procrastinating telling Todd the truth even though she knows it’s inevitable. There’s a focus on sibling relationships in this episode too, including Augie telling it like it is to Stella, urging her to tell Todd because it’s not fair to either of them not to.

She finally does, but not before Todd figures it out on his own. He at first responds by lobbing a basketball at Colton and then getting into a fistfight. Trey intervenes, getting popped in the jaw himself for his troubles, and he reminds Todd that who Stella is with is her choice.

Trey:  Both people have to want a relationship. The one who wants it the least has the power. It does get easier after high school though.

Trey: No, not at all. But you do get a better understanding of things.

Todd eventually takes the news a lot more maturely than most would, hugging Stella and saying they can hopefully be friends in the future. I am impressed, Todd!  There’s a tender Stella and Colton kiss before the end of the episode – the actors have a lot of chemistry, and Stella and Colton are kind of shy and sweet together. I’m sure their relationship is as doomed as Romeo and Juliet’s thanks to similarly feuding families, but I hope I’m wrong.

Geri is still torn between the Walkers and the Davidsons emotionally, but for now she’s made her choice. She and Cordell are not together (though they’re awkwardly trying to at least remain friends) and Geri is equally awkwardly trying to connect with her now family the Davidsons. Denise is initially reluctant, still blaming Geri’s adoptive dad for her father Marv’s death. That’s not rational, but it struck me as realistic. They all had some unprecedented revelations dropped on them a short while ago, and it’s no wonder Denise is having trouble just accepting Geri as her sister.

Geri is determined though, longing for a mother and a sister she never had, and eventually Denise agrees to give their relationship a chance.

Geri: We were both victimized by these men, our dads. Now that we know the truth, don’t we owe it to each other to make peace?

Smoothed over by more than a couple drinks, the two women begin to bond as sisters – so much so that Geri takes down Denise the Deer from the Sidestep to make her sister more comfortable there. I personally loathe that taxidermied thing so good riddance, but it’s undoubtedly going to be hurtful to Cordell since it’s a gift from Emily.

Trey has choices to make too, now that Captain James has offered him a full-time therapist job at Ranger HQ. He feels an obligation to stay with the school until graduation but agrees to come on board after that. James has a badge (and presumably a hat) all ready for him though – to make him a Ranger. I’ve figured that was coming ever since Lindsey Morgan left the show, leaving Trey without a solid connection to the other characters. It still strikes me as manufactured, and I’m not sure how he can so quickly become either a therapist or a Ranger just like that, but I’m happy to have Jeff Pierre stay with the show, so I guess I’ll roll with it.

And then there’s Walker. He volunteers to take Twyla to look at apartments – we get more sibling concern, with Liam cautioning Cordi that he doesn’t do casual when it comes to dating, and that neither Geri nor his kids are likely to approve. Cordell says it’s no big deal, and Liam calls him on it.

Liam:  Cordi, you don’t do casual. You’re a serial monogamist.

Cordell: Well, you have coffee with a guy and get engaged!

Liam: Bret and I dated 6 months!

Liam goes on a date with Ben, but we don’t get to come along. Boo.

Cordell seems to be reeling after the loss of the ranch in the race and the news about Geri (and the breakup with Geri), and he sees Twyla as that oh-so-easy falling back into it with an ex that many of us have done in an ill-advised moment. He says things are simple with Twyla, almost like he can take refuge in being someone else again, like he did when he was Duke. That’s who Twyla knows him as, and he seems to want to fall back into that to escape all the losses he’s faced recently. I feel for him, even if everyone around him is telling him it’s a mistake and we know they’re probably right.

Twyla is required to help the DA’s office when requested, and Denise sends her and Walker and Cassie to a horse auction to catch a bad guy who’s laundering money. Cordell is protective of Twyla, bristling when she’s in the line of danger, and that’s not lost on her.

Cordell: If there’s even a whisper of danger, I’m gonna call it and we send in a tag team.

At the auction, we get to see Cordi as almost back to his Duke person, in a baseball cap and a flannel shirt, which was appreciated. He sees a man fall off a horse and has a flashback to the race when the saddle strap broke. It’s about time you started thinking about that, Cordell! Why has nobody gone over that saddle with a fine-tooth comb??

The bad guys get wise to them and Twyla ends up being held at gunpoint. Walker tries to come to the rescue and Twyla helps by kneeing the guy and getting free, and together they toss him right through a glass door to the tune of some rock music.

Twyla: Duke and Twyla, together again.

Despite his reminder, they are both apparently feeling nostalgic, and a frantic makeout session ensues. Nobody is complaining because she pulls his shirt off and he hikes her up and carries her to a bed with her legs wrapped around him and when his phone rings she tosses it right over her shoulder. So there’s that.

Later we get shirtless Cordell in bed, and Twyla says what we’ve all thought for months – that it’s 100% absurd that Dan beat Walker in that race. As Twyla says, “not square anyhow.”

She asks him if “here, now, the moment” is good enough for him, and Cordell says yes. We don’t entirely believe him and neither does Twyla.

And in fact, Walker knocks on Twyla’s door the next day with flowers, and clear intentions to be more than casual, saying he wants to know what being together actually feels like. She agrees, but clearly has more doubts.

And true to both Geri’s and Liam’s warnings, when Cordell introduces his son to Twyla, Augie immediately expresses relief that they are NOT dating. Cordell is about to correct him when Twyla makes a decision – and agrees with Augie.

I found that scene pretty sad – Twyla does care for Cordell, I think, even if it’s the part of him that was Duke mostly. And she really is trying, her apology to August sincere. It hurts her to walk away, but I also think she’s probably right that it’s the right thing to do for both of them.

Twyla: I like your dad a lot, but I think we can all agree that there’s just too much history.

The framing here makes it clear that Twyla is well-aware that she’d be coming between Cordell and his son, and she’s not willing to do that. Karissa Lee Staples did an incredible job in this episode showing the evolution of Twyla – I felt for her character, the sadness underneath coming through in subtle expressions. She’s gotten to the point where she can make the hard decisions, even when they involved loss and sacrifice.

She asks for a transfer and tries to leave without even telling Walker.

Cordell: Were you really gonna leave without saying goodbye?

Shades of Dean Winchester and the Ma’lak box (“Supernatural” fans will understand that reference).

Cordell agrees with her reluctantly that them being together wasn’t in the cards.

Cordell: My brother was right. He said I don’t know how to do casual… Duke was your person. Cordell is someone else’s.

He kisses the top of her head as they hug goodbye, his eyes shining with tears.

This episode had a lot to say about how difficult choices are for us as humans, especially when they involve hurting someone we care about or losing something or someone who is important to us. It seems unfair that to make a choice that’s the right one might still involve a lot of pain, to yourself or to someone else.

Liam and Cordi share how their respective dates went, and Cordell says that Liam was right about him – that with Twyla, he was able to forget about everything and literally pretend to be someone else.

Walker: But that’s another life, one without responsibilities. Not mine.

He also shares that he can’t stop thinking about what Twyla said about him losing the race.

Walker: Daddy has been working with leather his whole life – how many of his straps have snapped?

Walker: What are the odds?

Liam: Cordell, what are you saying?

Everyone: For godsakes, what we’ve all been saying!

Walker: The Davidsons, what if they cheated…

We did not need the dramatic music, just saying. They are finally catching up to the rest of us!

As we get closer to the end of the season, it seems like the stakes are going to ramp up and we’ll be back to some of the sense of mystery that this show does well. I’m ready for more of that!