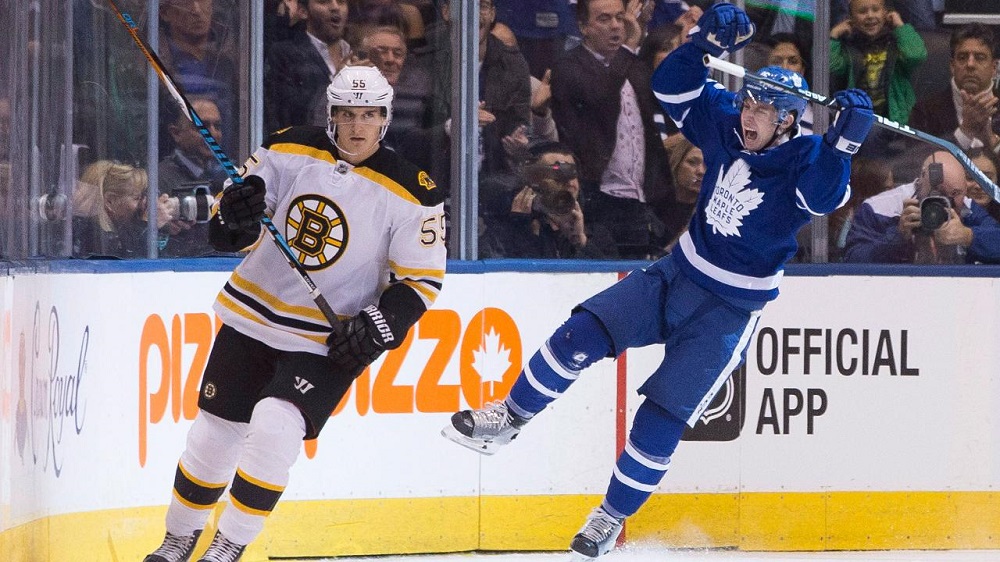 CBC debuted its long-running Hockey Night in Canada program on Saturday night. Not surprisingly the usual suspects, the Toronto Maple Leafs, were the featured team as they hosted the Boston Bruins. In a game between two teams, neither of which is expected to do anything this season, the Maple Leafs were the ones that made a case for being underrated.

The Leafs are currently the very last favorites to win the 2017 Stanley Cup. For example, Ladbrokes have Toronto priced at 100/1 in the ante-post market. The Bruins are more of a middle-of-the-pack kind of team as they are 25/1 in the same market with the same firm.

But the Leafs defeated Boston to get their first win of the season following an overtime loss to the Ottawa Senators earlier. The final score in the Boston game was 4-1 for Toronto on a night that saw some pretty stellar play from Frederick Andersen.

The 27-year old Dane, who spent the last few years playing for the Anaheim Ducks, had an amazing point-blank save with about five minutes to go in the second period. At the time it was a save that kept a two-goal lead intact and prevented the Bruins from getting any kind of momentum.

Andersen promises to be a central figure in whether Toronto has surprise success this season. Those that followed the Pacific Division last year, where Andersen played for the Ducks, will remember that Anaheim had a terrible start to the season. For a huge stretch of games, the Ducks didn’t score much, and it was Andersen that stole some points for Anaheim and allowed them to stage a divisional comeback. If Toronto surprises this regular season and make a play for the post-season, I’m sure that Andersen will be a big reason why.

However, Toronto’s offense hasn’t been short of bullets so far this season. In two games, they have eight goals with four-goal performances in each outing. On Saturday, the Toronto goal scorers were Connor Brown, Mitchell Marner, James van Riemsdyk, and Milan Michalek. None of those players had a multi-point night for the Leafs, but long-time Maple Leaf Tyler Bozak had two assists in a game where Toronto showcased their offensiveness in the first period.

Next up for Toronto is a few day’s rest and then a compact schedule on the road. The Leafs will be in Winnipeg on Wednesday (8 pm ET), they will play in St. Paul the next night (8 pm ET), and Toronto will be in Chicago next Saturday (7 pm ET). The strength of schedule isn’t that bad with Winnipeg and Minnesota coming up. However, three road games in four nights will pose a challenge to this Toronto team, one that they’ll need to rest and prepare for.