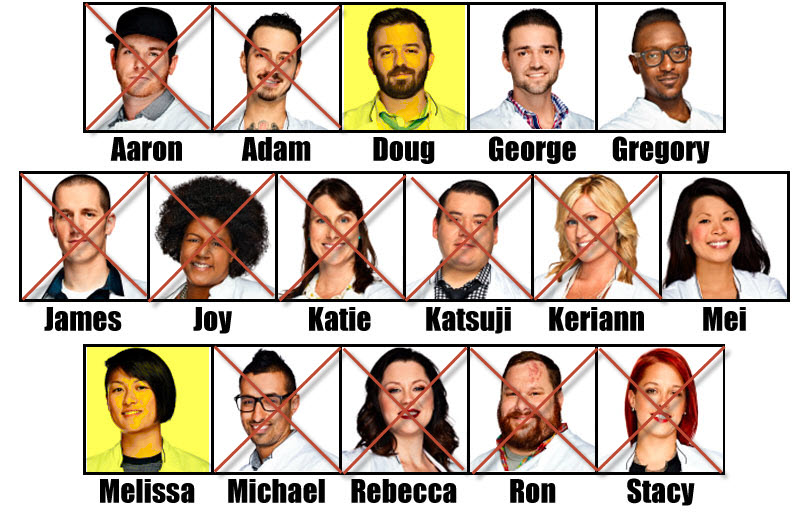 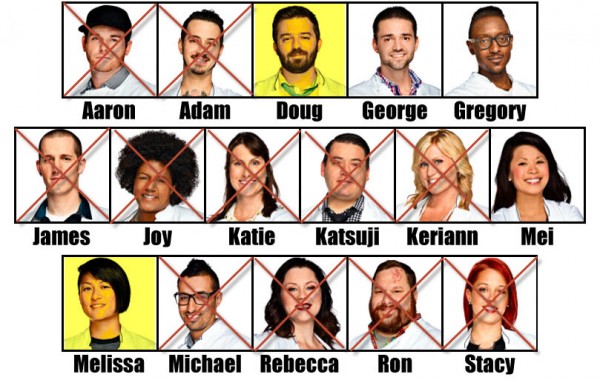 As the Top Chef: Boston competition is coming to its conclusion in just a few short weeks, there are four chefs left competing for the ultimate prize. This week’s episode started with the chefs proclaiming that the competition wouldn’t be the same without Doug, who was eliminated on last week’s show. Melissa said that going from the top of the competition to the bottom was hard on her and that she was struggling to make it through the competition without her girlfriend present to support her. 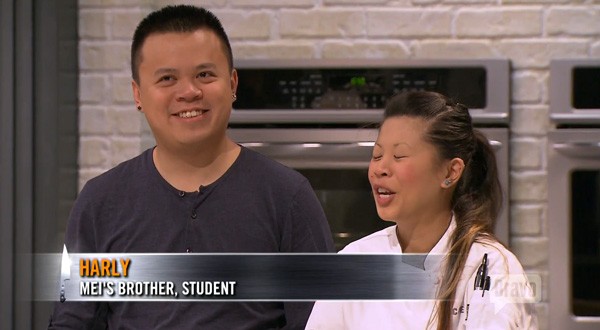 Padma then introduced Ashley Christianson to help judge this week’s challenge and Padma announced there was no quickfire this week. Instead, chefs were being sent on a mission to catch their own oysters to use in an appetizer and an entrée. Padma then brought out some family members of the remaining cheftestants, so that the chefs could receive help from their loved one in the form of serving as their sous chefs. George stated that his father was by his side but is very intimidating and hard for him to work with. Padma then informed the chefs that their appetizers would be prepared by their loved ones. She announced that no one was going to be eliminated from the competition after this challenge. The winner will move forward to the Top Chef finals, taking place in Mexico. Mei stated that her family does not support her being in the culinary business and that her brother was her parents’ preferred child. 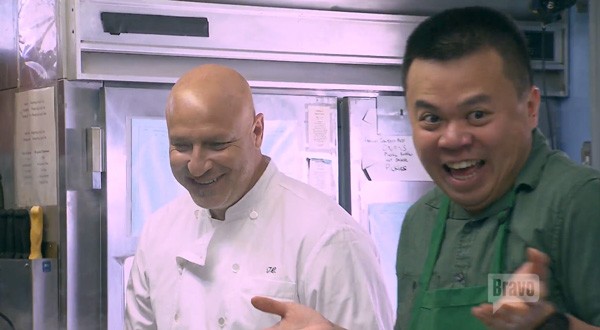 When the cheftestants and their loved ones arrived at an oyster farm they were taken out to catch them. Mei complained that her brother made it more difficult for them to catch their oysters. George also said that he feels like he has an advantage because his father knows his way around a kitchen. Mei then said that she was thinking about incorporating clams into her dish and this might be her ticket to making it into the finals. Melissa then said she might have her mom make an egg custard because she used to make them for Melissa when she was a kid. Gregory and his sister talked about the time they tried to bake a cake together and ended up throwing it away after they burned it. George said shopping with his father was a memorable experience and that he wanted to make a flavorful dish that was not too complicated so he could keep an eye on his dad while he made the appetizer. Mei complained she gave her brother a list of ingredients to get and he was too slow about shopping for them.

The chefs arrived at the place where they would stay overnight. Gregory talked about how close he and his sister are, especially when he cleaned himself up after getting hooked on drugs and alcohol. Melissa’s mom then said her dad does not accept Melissa’s career choice and avoids having her in his life due to the fact that she is gay. Melissa then said her mom had always supported and encouraged her. George stated that when he graduated from culinary school he was supposed to work for the family’s diner but he wanted to work in fine dining instead. When George opened his own restaurant his dad sold the family diner to help George run the restaurant from a financial standpoint. Mei then stated that neither of her parents approved of her becoming a chef.

As the chefs showed up at the kitchen where they would be preparing their dishes they gave instructions to their loved ones. Mei admitted that she is prone to becoming a control freak in the kitchen. She once again stated that her brother was working too slowly and she didn’t want that to lessen her chances of making it into the final leg of the competition. Tom then showed up to check on the chefs as they prepared their dishes. Later Mei said that after she yelled at her brother for moving too slow he finally started to speed up his pace. 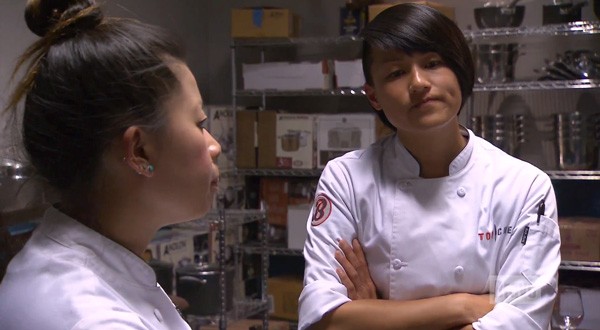 Mei was the first to present her dishes to the judges. Tom said the seafood was perfectly cooked and Gail said it was well seasoned. Mei then stated that she and her brother had bonded throughout the course of this challenge. Gregory got so busy helping his sister he let his oven get too warm and had to pull his halibut off of it so it did not end up overcooked. He also stated he wasn’t sure if his dish was good enough to get him into the finals. When he presented it to the judges he introduced his sister, Jessica. Jessica described her tomato watermelon soup and Richard Blais told her she prepared it well. He also told Gregory he did a great job teaching his sister. Other judges said that the soup could have been saltier. George said he and his father worked hard to make these dishes and that he felt like his father was proud of him now. Mei complimented her mother on moving so efficiently through the process of making the dish. The judges praised Mei’s mother’s custard. Mei made a lobster dish and the judges said it was perfectly cooked. Mei then stated she was grateful that the judges liked her dishes and that winning with her mom’s help would be a sweet victory. Tom then said that Gregory’s sister did a better job on her dish than he did on his. Padma complimented Mei on her lobster entrée. 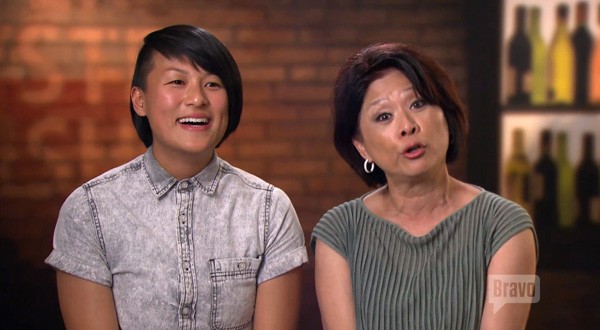 Padma then announced the other judges that she felt like they had their winner chosen for this challenge. She then called all of them to the judge’s table. Tom said that this challenge helped bring people together and that some family members did better than their chef did. The one chef chosen to go onto the final rounds of the competition was Melissa, who was very relieved to hear this news. The chefs had to say goodbye to their family members.

Editor’s Note: Last Change Kitchen surprised both Adam and Doug as they were waiting for the next cheftestant to walk through the doors, but then Tom did his wiseass smirk. He let the boys know that since no one was eliminated from Top Chef Boston this week, they’d be duking it out in their third head to head battle. They were tied at one to one so this was their tie-breaker. It centered around one of Top Chef’s biggest sponsor’s Hidden Valley Ranch Dressing where they had to create a meal using it and vegetables found in crudite.

Adam’s been the strong one in this part of the competition as it was his fourth round, but Doug bested him even though he overcooked his first choice of steak and went with pork for Tom. So Doug rejoins the cast for the finale after we see who moves on next week.