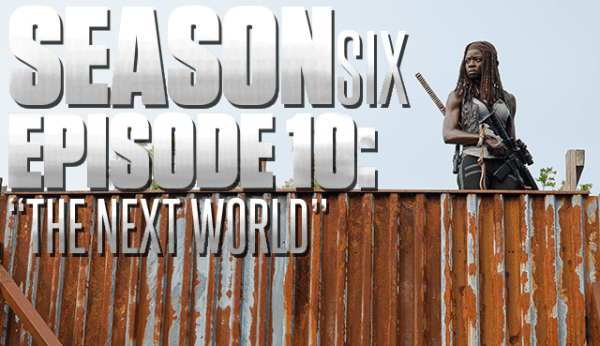 The Walking Dead Se6 Ep 10 The Next World

Something terrible happened on last night’s The Walking Dead. The internet got to roll out one of their “clever” name mashups, and Richonne is now hashtagging it’s way through Twitter.

It’s not that clever folks. You just replaced an “M” with an “R”. Good grief!

This episode is about two months after the debacle that left Carl with just one eye and the Anderson family eaten alive. Carl is doing fine, and we see Michonne much closer to the family as they start the day like a normal tribe headed off to work.

The adventure this week came on a supply run. Rick and Daryl should implement a Prez / Vice Prez “never on the same plane” type plan. Rick and Daryl on a dangerous mission at the same time could result in the group losing two key leaders in one foul swoop.

Michonne is kept busy this week following Spencer, who’s walking in the woods with a shovel for some reason. 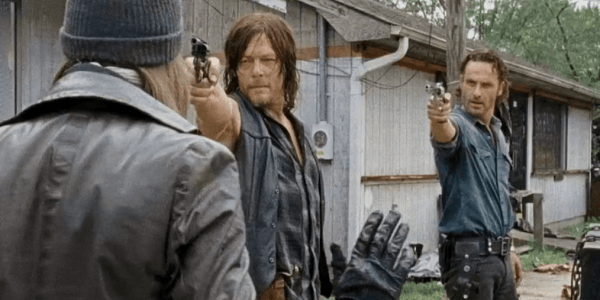 Rick and Daryl luck their way into a truck filled with food. Daryl even gets some pop for Denise as a gift to Tara. All that luck came to an end when a stranger named Paul Rovia pulls an okie-doke and steals the truck for himself.

This dude is slick and says his friends used to call him Jesus. Daryl prefers “asshole,” after the guy ruins the supply run.

There was a lot of roaming through the woods in this episode. Carl and Enid were hanging out there when Carl let a Walker just walk away. Enid saw this as reckless and decided she would leave Carl there to do his thing alone.

The change in philosophy was mentioned several times between Rick and Daryl. We saw at the end of last week’s show that Rick felt like there is a real chance for the community now in this new world. Daryl, on the other hand, has back-tracked and thinks looking for new people may not be best after all.

Rick mentions how he sees hope in bringing in new people to Alexandria. To which Daryl says, “What like this guy?”

“No, not like this guy,” Rick told him. These two were a pretty funny pair for a road trip.

R & D did catch up to their box-truck full of food when Paul Rovia had a flat tire. This guy is no joke. He laid the wood to two of the baddest dudes on TWD, before they drew their guns on the guy. That ended the little scuffle.

Paul seemed surprised that they had actual ammo. We’ve mentioned before that ammo is running low in the world and it may not be long before most battles involve more savage weapons.

Paul turns out to be super resourceful even after being left tied up in the middle of the road. He ends up hitching a ride on top of the box truck headed back to Alexandria.

He does get flipped off of it and then does a tackling drill with Daryl. That nearly ended with the guy stealing the truck for the second time, which would have been pretty embarrassing for R & D who would have had to never mention that to the group at home.

Paul did shoot a Walker that was about to chomp down Mr. Dixon, so the guy’s not pure evil. He may just be a thief and a con man.

Regardless, the food is lost when the truck is swallowed up by the lake as it rolled away during this melee. Not the best way to endear yourself to a new group there Paul.

The Walker left alive (sorta) by Carl ended up being Deanna. She was spared by the boy so she could be handled by Spencer. He thought family should handle these things, which Spencer did eventually. He had seen his mom during the invasion and had been searching for her ever since.

Michonne told Spencer he still had family and still had a home.

The closeness of Team Grimes has spread to the entire city at this point.

Once safely home, Daryl made sure Denise knew it was “This asshole’s fault” (Paul) that no pop was delivered. Paul would be allowed in the city but under guard.

Not very good guard, however.

The end of the day looked more like a family than even the morning when Michonne could have been mistaken for a stepmom getting ready to head off to the office.

She and Rick relaxed on the couch together talking about their day, just like a normal couple in a world that didn’t involve zombies and steel walls.

The world’s newest power couple, which will never be referred to as “Richonne” here after this sentence, was finally formed over some breath mints. Rick and Michonne went from innocent hand holding to kissing, to official lovers.

The union was even consummated in the most fitting way as they jumped to naked battle formation the next morning when Paul woke them up.

This Paul is an interesting character and pretty slick. He should add some freshness to TWD as we build up to the inevitable Negan confrontation.

Rick and Michonne as a couple is something that fans have wanted for a while. This should make those people happy, even if it means Rick forgot about Jessie in about three seconds.

‘The Boy’s Last Time To Look On This World Of Lies 3.05 Deep Dive