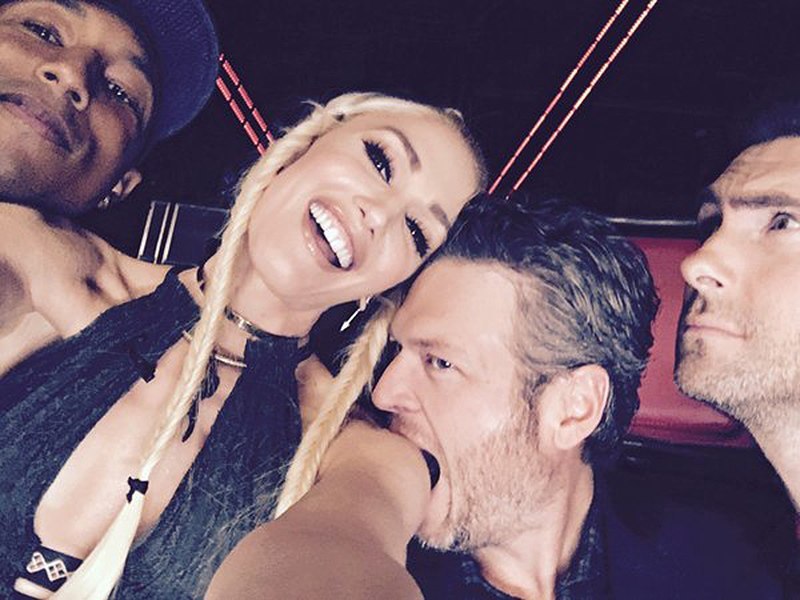 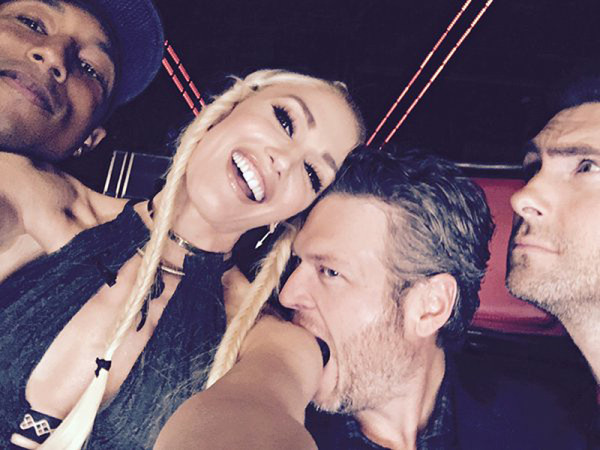 Tonight was the biggest night thus far for the contestants on NBC’s The Voice. In the Live Semi-Finals, the 9 remaining artists took the stage to perform for a spot in the Top 4. Subsequently, this means that it will be the end of the road for 5 of the artists tomorrow night, depending on how they perform.

In addition to the Top 9 artists performing, The Voice also welcomes artist Ellie Goulding to sing her hit “On My Mind,” and coach Blake Shelton – aka the Cowboy – takes the stage to sing his new song, “Gonna.” Blake also showed a little PDA with Gwen Stefani tonight too.

So here is the recap of the performances from tonight:

The first performance of the night was from Barrett Baber, one of the remaining country artists in the competition. This week he decides to take on a pop song and put his own country spin on it.

Unfortunately, the whole performance was hard to watch and listen to. Not only were Barrett’s vocals off-putting throughout, but also the overall execution – including the visuals, background instrumentals, and out-of-place choir – were lacking cohesion. I wasn’t a fan of Barrett before this week and I think this is finally the performance that will send him home.

Of course the judges can’t say any of that and pile on the disingenuous praises to Barrett – as they do with 99% of the time. It is times like these that I miss the good ol’ Simon Cowell days on American idol, where he wouldn’t shy away from giving his blunt, honest – often harsh – opinion. Nonetheless, we are stuck with the Blake-Adam romance, Pharrell’s weird fashion sense and Gwen’s ever-changing hairstyles (she seemed to be channeling her inner Legolas today).

“Even God Must Get the Blues” by Jo Dee Messina

Shelby chooses to sing one of her favorite songs, but fears that it might not be the wisest choice, as not many people know it. Adam advises her to go for it and “make people know the song.” However, I think Shelby had the right gut instinct and could have made a much more suitable song choice as she tries to win a spot in the finals.

Nonetheless, she moves ahead with “Even God Must Get the Blues,” but has troubles during rehearsals due to a lack of confidence. Adam claims that Shelby is one of the – if not the – best singer left in the competition, but her overthinking takes away from her talent.

Shelby delivers a nearly flawless vocal performance, but she continues to lack any spark or personality while on stage, which I think will ultimately be her downfall. In addition, during her big run at the end she hit a sour note or two, which I think she even noticed. Shelby’s voice got her this far, but I don’t think it will be able to get her any further as we approach the big cut tomorrow night.

Jeffrey decides to create his own version of the Cher classic, “Believe.” During rehearsals, Gwen notes that it almost becomes like an “Elton John song,” as Jeffrey incorporates a slower, more laidback vibe to the hit.

I really liked Jeffrey Austin in past weeks, but I didn’t particularly feel tonight was his best. There were quite a few times where it sounded like he was missing the notes – but it could have easily been from his attempt to force his artistry into the song as much as possible. In addition, they had people popping out of lit up doors behind him, which was more distracting than anything else. If it helps, Jeffrey definitely won for weirdest background visuals of the season.

Ultimately, I still like Jeffrey as a singer so I wouldn’t be upset to see him in the finals. He definitely got some glowing reviews from the coaches (surprise, surprise), which might help him win over some voters.

At this point, I think even Braiden realizes he is singing on borrowed time. In his tape from the week of rehearsals, Braiden cries and claims that Gwen is like a “mom” to him. Evidently, trying to grab the audience in any way possible. You’re not fooling me Braiden!

He hopes to evoke his emotional connection with the gospel hymn. From the get-go, Braiden’s eyes seem to be glistened over. Surprisingly, he makes it through his performance without choking up. Although his vocals were relatively stable and stronger this week, the song choice was bland and just didn’t add any appeal to him as an artist  – especially one that is trying to make it in today’s music industry.

“The Climb” by Miley Cyrus

Zach decides to shake things up this week with a Miley Cyrus hit. Although in the past weeks Zach has relied heavily on his visual performance, this week he is attempting to showcase his vocals – seeing as he is on The Voice.

I was pleasantly surprised by Zach’s vocals this week. With all of his dancing and other antics, I never took him to be a serious vocal artist. However, with this song he was able to showcase his strong lower register. Unfortunately, it did begin to drag so I am not too sure about his fate in the competition.

Madi tries to go back to her gigs from before The Voice, with a song that she is very comfortable with. Although Madi has a strong voice, it is nice to see her take on a more light-hearted tune, where she almost gives off Amy Vachal (Team Adam) vibes.

With an elaborate café set-up on stage, Madi shows off her versatility and dynamics flawlessly throughout her performance. I was starting to doubt whether any singer would really stand out tonight, but then Madi took the stage. Simply. Amazing.

17-year-old Emily decides to take on one of her idols, Dolly Parton’s most well known songs. Blake advises her to keep her blue-grass vibe when performing the song.

This week, Emily’s performance was very up beat and fun to watch. She definitely looks like a country star.  Although her vocals are as close to perfect as one can get, I still think she has some work to do in terms of stage presence and connecting with the audience. At times it looks like her eyes are staring blindly ahead as she tries to imagine what lyrics come next. Fortunately, she did get more and more comfortable as the performance went on.

“Make You Feel My Love” by Bob Dylan

Braiden wasn’t the only one crying during her video confessional; Amy also couldn’t help but get emotional, while thinking about her whole experience on The Voice. Unsurprisingly, Amy opts for another slow-paced, light performance but hopes to evoke sincere emotion this week.

Unfortunately, I didn’t think her performance tonight was as memorable as her past few. She didn’t incorporate as much of her own artistry as I was expecting – but she did have a few really raw, beautiful moments. Nonetheless, she has been in the Top 10 on iTunes for 3 weeks now, so I think (and hope) she will make it to the finals.

“Somebody to Love” by Queen

Of course, powerhouse Jordan is the last performer of the night. He decides to pull out all the stops this week with a gospel rendition of “Somebody to Love.”

And of course, he kills it. It is insane how he is able to nail both powerful high notes and deep low notes. He seemed extra energized this week; I am guessing it is because he knows he’s got it in the bag at this point. Hands down, best performance of the season thus far.

Catch the Live Eliminations tomorrow December 8 on The Voice on NBC at 8pm – where the Top 9 will be cut down to the Top 4 Finalists.

My Predictions (or at least who I am rooting for) for Top 4 (in no particular order):

With Jeffrey Austin and Zach Seabaugh as backup.