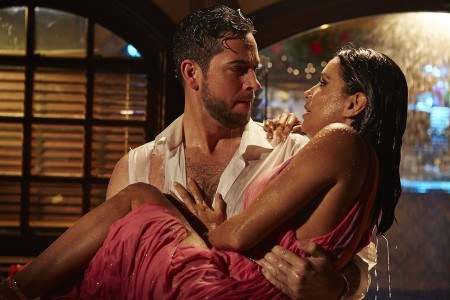 This week we saw the official premiere of “Telenovela” during its regularly scheduled time slot. Starring Eva Longoria as Telenova star Ana Sofia, the show makes fun of the genre more than anything else.

Which is fine, only sometimes it is too distracting. As I mentioned when I reviewed the preseason airings, it’s good to see diversity on TV. Sometimes we forget that a network’s diversity means more than just throwing some black show into the mix. My hope for this one is that it finds its footing quickly so that it can maintain. Now on to the recap.

Ana Sofia, who is in a constant battle with the fact that her ex-husband Xavier, also a telenovela star, has joined the cast of the show that she leads, still doesn’t know how to deal with him being around. The first thing he does that pisses her off one particular moring is take her parking spot. Seeing him double parked, she does what any reasonable woman would to her ex’s poor parking job- block him. From how thing start off before she even gets to hair and makeup, Ana should already know it’s going to be a “special” day.

Once ready to go on set, Xavier’s mere presence gets under her skin, so much so that she can’t remember her lines. It also doesn’t help that the head of the network James (Zachary Levi) whom she has a slight crush on, went to lunch with Xavier. She goes into a throwing tantrum and her friends pull her to the side in an attempt to intervene.

While Mimi and Gael deal with Ana, Rodrigo and Roxi tell Xavier about La Llorona, the Mexican ghost who kidnaps misbehaving kids in an effort to help him figure out who has been tampering with his guitar. To them, the only logical answer is a ghost, but he doesn’t believe in them to their unbelief.

James invites Ana Sofia to have dinner with him since she made such a big deal about his dinner with Xavier. She feels like anything that deals with the show should be discussed with her since she is the star.  Her friends, however, insist that he likes her and has asked her on a date (her first date since the divorce), but she tries to stay oblivious to the fact.

Rodrigo and Roxi enlist Isabela’s opinion about what’s happening around the set with Xavier, and she tells them about the former star who died on set. Supposedly the ghost comes back and haunts the male leads of the show, and that is more than likely what is happening to Xavier. We find out later that it is all just a prank that they play on him as a form of official initiation into the crew.

The next day on set, James comes to visit, and Ana immediately tries to hide the fact that she is eating cheese puffs because Pasion, her character, would never eat them. Her peeps accuse of her being in character and not herself whenever James is around. She denies it but then in a split second gets dressed like Pasion and then allows him to come into her dressing room.

On their next date, James takes Ana to a salsa club and she not only doesn’t know how to salsa, but she also doesn’t know how to speak Spanish. For whatever reason, she continues her charade with him about who she is. Her reasons for not opening up is because she is afraid of being hurt, since the last time she did, Xavier broke her heart. While she tries to her best to keep it all together, everything falls apart when James spins her and she bumps into a waiter. She then comes clean about who she has been trying to be because she thought that’s what he wanted. He tells her that Pasion is too intense for him and that he doesn’t want to date her character, he wants to date her. She is relieved as she takes off her wig and takes out her cleavage boosters. She can finally be herself.

In the end, as they kiss, the club catches fire causing the sprinklers to come on, and James carries her out to safety, dripping wet because it was too slippery for her to walk.

Now that’s the stuff telenovelas are made of.