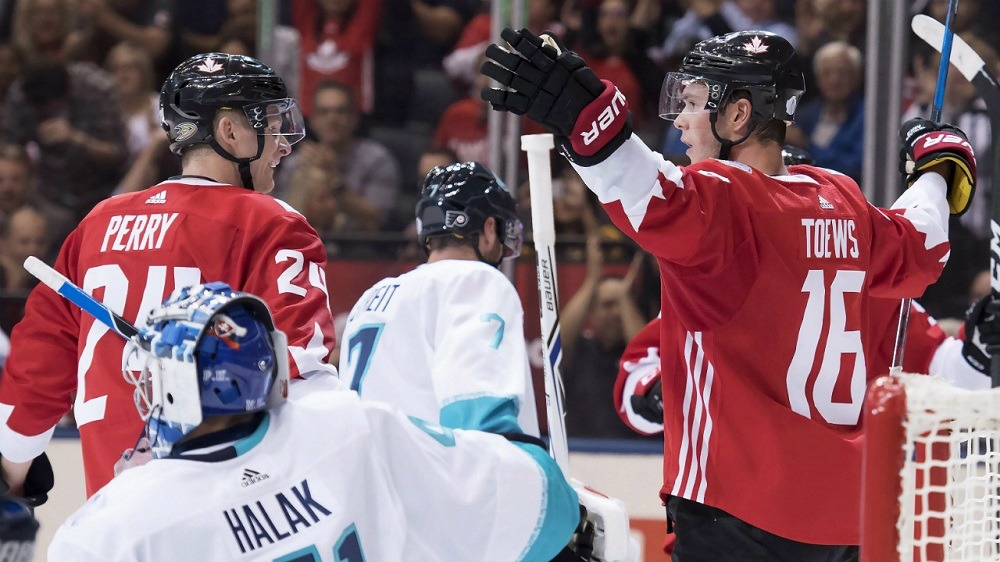 Team Canada and Team Europe will square off in a best-of-three format for the 2016 World Cup of Hockey title. At stake is a whole lot of nothing as an All-Star team such as Team Europe isn’t really a national team. Arguably Canada has already won national bragging rights in the tournament as the stand-alone nation that has done the best. However, hockey fans north of the border and in Europe might enjoy the upcoming games all the same with Team Canada coming in as very heavy favorites.

The betting odds for the game are noteworthy for as bet365 have Canada at -833 (about 10/83) to win on Tuesday. You never see betting odds that short in neither NHL hockey nor Major League Baseball, at least when it comes to an individual game result. You do see odds that short for NFL football games sometimes when you’re dealing with best-versus-worst kind of scenarios. NBA basketball games routinely have odds that short (and shorter) as the elite teams can go for months between home-court losses.

Odds of 10/83 imply that if Tuesday’s game was played 93 times (10 + 83) then Team Canada would win 83 times and Team Europe 10 times. The implied winning percentage for Canada would be 89.2% if the betting odds were taken to be true odds. Whether they are or not is a matter of opinion. However, the odds are certainly incredibly short for the sport. The combination of better talent, players experienced winning international events, and home-ice advantage makes it hard to picture a competitive game upcoming on Tuesday.

Regardless of the result, that Canada is considered the crushing favorite is probably bad for international hockey. A Canadian win seems like a foregone conclusion, and you have to wonder how that will affect ratings. Baseball stretch races might be more interesting and, on that matter, the Toronto Blue Jays are scheduled to play Baltimore at about the same time as Tuesday’s game. That certainly might attract more attention as the Jays’ season hangs in the balance while Canada seems like a lock for the hockey championship.

Finding a solution that makes international hockey events more competitive certainly isn’t easy, at least not without compromising the integrity of top-level competitions. I actually think that both the Team Europe multinational team and the Team North America rookie team were designed to make the World Cup more competitive. That’s easy to see with the European team as the members are the joined forces of several smaller countries that have difficulty standing alone. With Team North America, it deprived Canada of taking some players that belonged on the national team, and that helped make the Canadians slightly less monstrous.

But if Canada dumps Team Europe, despite the former being handicapped pre-tournament by roster rules and the latter representing multiple nations, then I wonder how much it hurts international hockey. If they decide to do another World Cup anytime soon, then it might be smart just to split Canada in two somehow. Something like Ontario/Manitoba as one team and the rest of Canada as another team might work a lot better. The World Cup has already discarded any pretense of being an international event in the pure sense so it shouldn’t strike many as odd.

Game 1 of the 2016 World Cup final is scheduled for Tuesday at 8 pm ET while the Blue Jays/Orioles start an hour earlier. ESPN, CBC, and TVA Sports have the coverage for the hockey while Sportsnet will have the Jays. Game 2 is scheduled for September 28th while Game 3, if needed, is on October 1st. With Canada beating Europe 4-1 in round robin play and with the insight that betting odds can provide, there doesn’t appear to be many that has any kind of serious faith in the European side.