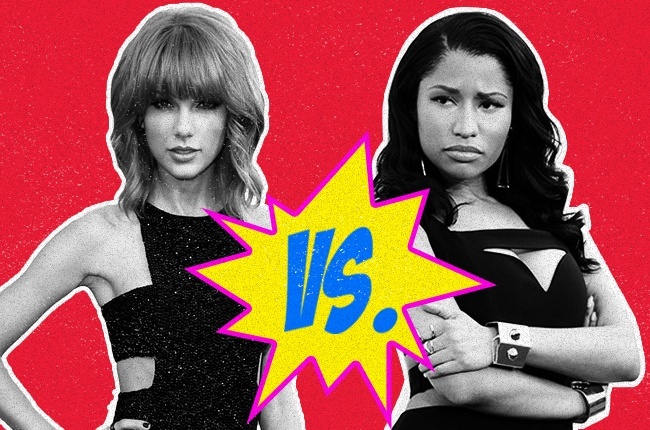 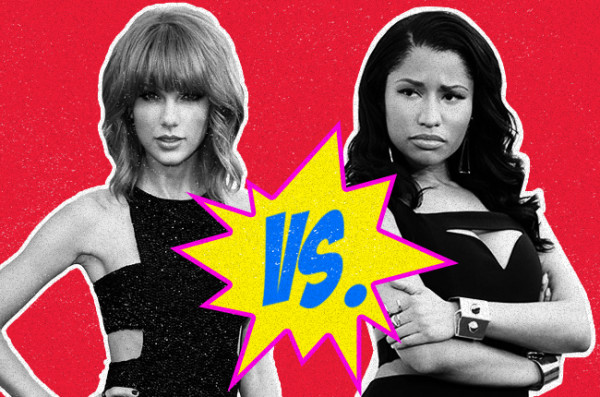 Following MTV’s release of its VMA nomination list, Nicki took to twitter to voice her frustrations, as she felt she was snubbed in a number of categories. In the series of tweets, Nicki points out how viral her video for “Anaconda” was, explaining it had even become a meme on the web.

However, she felt just because she isn’t a certain “kind” of artist, she was snubbed by the award show.

On the other hand, Taylor Swift is leading in nominations, being named in 9 various categories. Swift choose to jump in on Nicki’s rant when it seemed that one of her tweets was directed at Swift, specifically at her video for “Bad Blood.”

“If your video celebrates women with very slim bodies, you will be nominated for vid of the year”

Which Taylor interpreted to be directed at her video that featured several “slim” stars, including Selena Gomez, Gigi Hadid and Zendaya.

“@NICKIMINAJ I’ve done nothing but love and support you. It’s unlike you to pit women against each other. Maybe one of the men took your slot…”

Which, prompted a tweet from Nicki trying to defend her rant:

“Huh? U must not be reading my tweets. Didn’t say a word about u. I love u just as much. But u should speak on this. @taylorswift13”

In which, Taylor “ended” the little feud, posting:

“@NICKIMINAJ If I win, please come up with me!! You’re invited to any stage I’m ever on”

If your video celebrates women with very slim bodies, you will be nominated for vid of the year 😊😊😊😊😊😊😊😊😊😊😊😊😊

Huh? U must not be reading my tweets. Didn't say a word about u. I love u just as much. But u should speak on this. @taylorswift13

Since the exchange between the two, a few fellow celebrities have taken to Twitter to voice their stance on the topic.

I love you both. How about we all get together and talk this thru? Coffee? Pancakes??

Bruno more boldly pointed out the tension between Taylor and Nicki, somehow managing to bring in Swift’s bestie Ed Sheeran to the mix. Bruno tweeted:

Which got a playful response from Sheeran, who posted:

“@BrunoMars any way we do dis you gon’ com up short”

Yo I want in on this twitter Beef!! VMAs is the new WWF!! @edsheeran Fuck You!

@BrunoMars any way we do dis you gon' come up short

Regardless, it seems that there is already drama building up around the August 30th award show and with Miley Cyrus hosting, it will surely be one to watch. 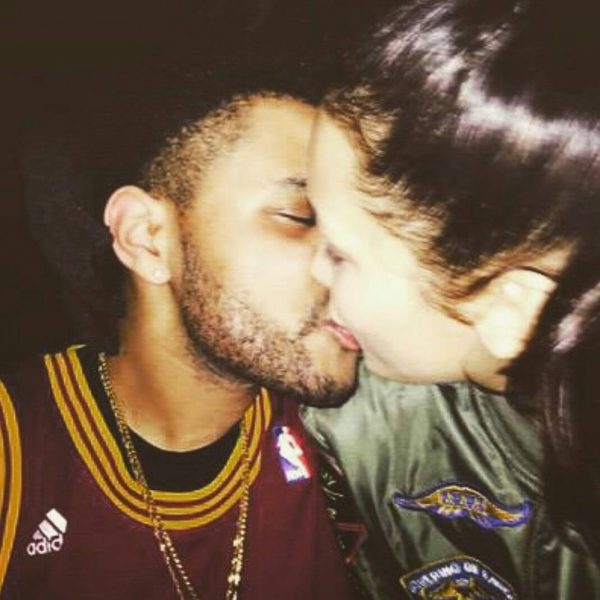 A source has confirmed to E! News that singer The Weeknd (Abel Tesfaye), 25, and model Bella Hadid, 18, are still going strong.

The couple’s relationship, which was confirmed just over a month ago after the two were seen together at the Coachella Music Festival, has stayed relatively private. This is reportedly because The Weeknd prefers to stay out of the public eye and Bella fully respects his feelings and agrees remaining low-key will probably be best for their budding relationship.

The insider told the media outlet that Bella is incredibly supportive of her boyfriend’s rising career and is a big fan of his music.

The model’s sister, Gigi Hadid, hinted at the relationship when she posted a picture of her presenting The Weeknd with Artist of the Year award at the 2015 Much Music Video Awards, in which she tellingly captioned it “Congrats my brother.”

Some people are criticizing the different reaction the couple is getting in comparison to Kylie Jenner and Tyga. Bella and The Weeknd are 7 years apart, although Bella is 18 and it seems that is why she hasn’t been getting the backlash that 17-year-old Kylie has for dating 25-year-old rapper, Tyga.