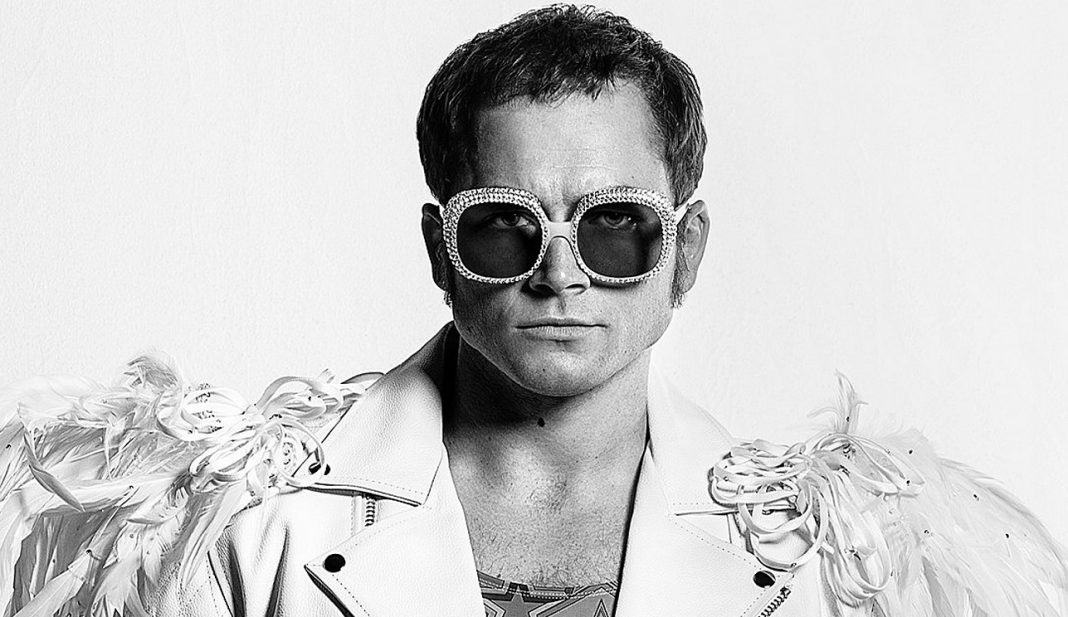 Actor Taron Egerton has said more than once that portraying Elton John in “Rocketman” is “the greatest joy of my life.” The Welsh actor has earned a lot of early buzz for his musical chops in the movie’s trailers. Naturally, some raised issues of a ‘straight’ man playing gay icon Elton, but everyone seems to be welcoming him with open arms.

Even Elton was impressed that the actor has his own set of conditions before signing on to play him.

“I would not have played this character if: one, I wasn’t allowed to show Elton being a nightmare, because he has been; two, if we weren’t able to explore his drink-and-drug addiction because I don’t think you can tell a story without it; and three, if I didn’t think we could make a ﬁlm that the gay community would watch and feel a sense of ownership over,” Egerton said. “What right do I have to play Elton John if I am not going to go the same lengths to portray a gay relationship as a gay actor would?”

Sir Elton John gave actor Taron Egerton some unlikely advice for portraying him in “Rocketman”: Don’t do an impression. Sing the songs the way you want.

It was a freeing, if unusual, bit of direction for a project about himself that John had been trying to make for seven years. But it gets to the heart of what “Rocketman,” out May 31, is trying to do: Evoke the essence of John’s life, as told by John, from his childhood to middle age and all the success, tumult and darkness behind all those fantastical costumes, and not give audiences a Wikipedia entry. You won’t even hear John’s voice at all — Egerton performs the songs himself. It’s an unconventional biopic for an unconventional rock star and John, 72, certainly wasn’t going to get in the way of that.

The project itself came together in a roundabout way, after a few years of false starts. At one point, Tom Hardy was actually signed on to star. But it wasn’t until producer Matthew Vaughn — who is friends with John and his husband David Furnish and had convinced John to do a cameo in his “Kingsman” sequel — proposed the idea of Egerton that things really started moving forward.

Director Dexter Fletcher said it was the, “idea of Taron playing Elton that ignited it for me.” He’d worked with the actor before, on “Eddie the Eagle,” and knew he had the vocal chops to do it and the daring to be able to “go there” for an R-rated musical.

In “Rocketman,” there will be rock and roll, drugs, sex, rehab and an exploration of John’s relationship with his then-manager John Reid, who is played by “Game of Thrones” alum Richard Madden. In other words, “Bohemian Rhapsody” this is not.

“It’s where they didn’t dare to go on ‘Bohemian Rhapsody,’ where they didn’t want to go,” said Fletcher, who was actually the one who finished the Oscar-winning Freddie Mercury biopic after director Bryan Singer exited. “It’s part of Elton’s life. He wears glasses. He plays the piano. He’s gay…I saw it as an opportunity to look at that. It’s responsibly and creatively and respectfully handled and I’m really happy with what we’ve done. I think it might make a difference.”

“Bohemian Rhapsody” was criticized for glossing over Mercury’s sexuality.

For Egerton, 29, the opportunity to play John was a “surreal dream,” if a little daunting.

“I’m a big believer in doing things that scare you and it is intimidating but I wouldn’t have done it if I didn’t feel it was a good candidate for the job,” said Egerton. “I always felt that it had the potential to be quite special.”

He plays the music icon from around age 17, when he’s still going by Reginald Dwight, to age 43. To prepare, he trawled YouTube for old clips and acquainted himself with some lesser known songs, but he knew that there was a limit to what he’d be able to glean from the public record, in part because the film shows John at some of his darkest moments, which weren’t exactly happening when the cameras were on. And he found that he learned the most by getting to know John himself.

In fact, Egerton has become good friends with John over the past few years, starting with his “Kingsman” cameo, evolving to their first one-on-one outing for takeaway curry, and culminating into a relationship where they now speak most days.

They even have been known to give each other gifts. John gave Egerton his first diamond earring (which Egerton wears for the rehab scenes) and Egerton, in return, got John’s prescription added to the glitzy glasses he wears in the scene where he’s writing “Your Song.”

“He’s worn them a couple of times since which really touched me,” Egerton said.

As with the singing, Egerton had the freedom to put his own spin and interpretation on things.

“It’s a fantasy creation,” he said. “When you see the film I hope I am recognizable as him. But it’s undeniably me as well.”

It’s worth reiterating that this is not even attempting to be a documentary. As Fletcher says, John is telling his story from memory, and he’s a “slightly unreliable narrator.” So the costumes aren’t carbon copies. He didn’t really levitate on stage at The Troubadour (nor was he clean shaven). And don’t expect to learn any dates (there are none included).

“He is the rocket man. You can’t be pedestrian with your storytelling when you’re making a movie about a rocket man…It’s a little psychedelic, elevated and kooky,” Egerton said.

And while the laws of gravity aren’t necessarily applicable here, there was one rule he set for himself: You will never see him miming any songs. Most of the time, he’s actually even singing in-camera.

Aside from the spectacle of the songs, the heart of the film, for Egerton, is John’s relationship with Bernie Taupin, his longtime lyricist who is played by Jamie Bell.

“It’s a platonic love story between Elton and Bernie,” he said.

He remembers asking John what it was like when he met Taupin.

It’ll be a daunting day, he expects, when John finally sees the final cut, but he and Fletcher are eager for audiences to see it.

That Talked About Sex Scene

The sex scene that seems likely to land Elton John biopic “Rocketman” an R-rating is “electric” and has a powerful artistic intention, said star Taron Egerton.

Last month it was reported that Paramount Studios had asked director Dexter Fletcher to remove the scene, which shows John’s first sexual encounter with manager and soon-to-be-lover John Reid, played by Richard Madden. It was said to include “the F-word several times” and “brief rear nudity, and someone snorting cocaine.” Fletcher responded that there had been no such intervention, and the movie would be “the no holds barred, musical fantasy” that everyone involved “passionately support and believe in.”

“I felt Richard’s penis… On my leg,” he said. “We shot a scene where we are both naked on a bed and we are rolling around. I don’t really know how much further we could have gone.

“In the script, this is the scene of Elton losing his virginity and we wanted to try to do that justice,” Egerton told Attitude. “They were falling in love and it’s beautiful because it should be. We didn’t want to play like they were a couple who were eventually going to fall apart. We wanted to play it like two guys in their early twenties who are falling in love and who are incredibly sexually attracted to each other.”

Who’s Who In Rocketman

Taron Egerton rose to fame as Gary “Eggsy” Unwin in the movie ‘Kingsman,’ an adaptation of the graphic novel series ‘The Secret Service.’ John appeared as himself in the 2017 sequel ‘The Golden Circle.’ ‘Rocketman’ is Egerton’s second project with director Dexter Fletcher, having worked together on 2016’s ‘Eddie the Eagle,’ a film about the British ski jumper who became a cult hero at the 1988 Winter Olympics by finishing in last place.

Elton John’s lyricist Bernie Taupin is played by Jaime Bell, who had worked with screenwriter Lee Hall previously when he starred as the title character in ‘Billy Elliot.’ Released when Bell was 13, ‘Bllly Elliot’ earned Bell numerous awards, including a BAFTA for Best Actor in a Leading Role and a British Independent Film Award for Best Newcomer. He is currently married to actress Kate Mara.

Richard Madden stars as John Reid, Elton John’s boyfriend and manager in the early ’70s. Madden is best known for playing Robb Stark in the first few seasons of ‘Game of Thrones,’ but he has numerous film, theater and television credits to his name. He’s a graduate of the Royal Scottish Academy of Music and Drama in Glasgow.

The daughter of actor and director Ron Howard, Bryce Dallas Howard got her start with bit parts in some of her father’s films, including ‘Apollo 13’ and ‘A Beautiful Mind.’ She had her breakout role in 2004’s ‘The Village,’ and picked up a Golden Globe nomination for ‘As You Like It.’ In ‘Rocketman,’ she plays Sheila Dwight, Elton John’s mother.

After spending the previous 35 years as an actor, Dexter Fletcher moved behind the camera to direct 2011’s ‘Wild Bill,’ which he also wrote and appeared in. Fletcher made headlines on this site in 2017 when he was brought in to replace Bryan Singer as the director of ‘Bohemian Rhapsody,’ with which he had originally been linked.

When Elton John discussed the movie in 2012, he said he wanted Justin Timberlake to star in it because he had done it so well before, in the video for 2001’s “That Train Don’t Stop Here Anymore.” Then, in 2013, Tom Hardy, who played Bane in ‘The Dark Knight Rises,’ signed on to the project. But he left when he realized that he was not up to the vocal demands of the job.