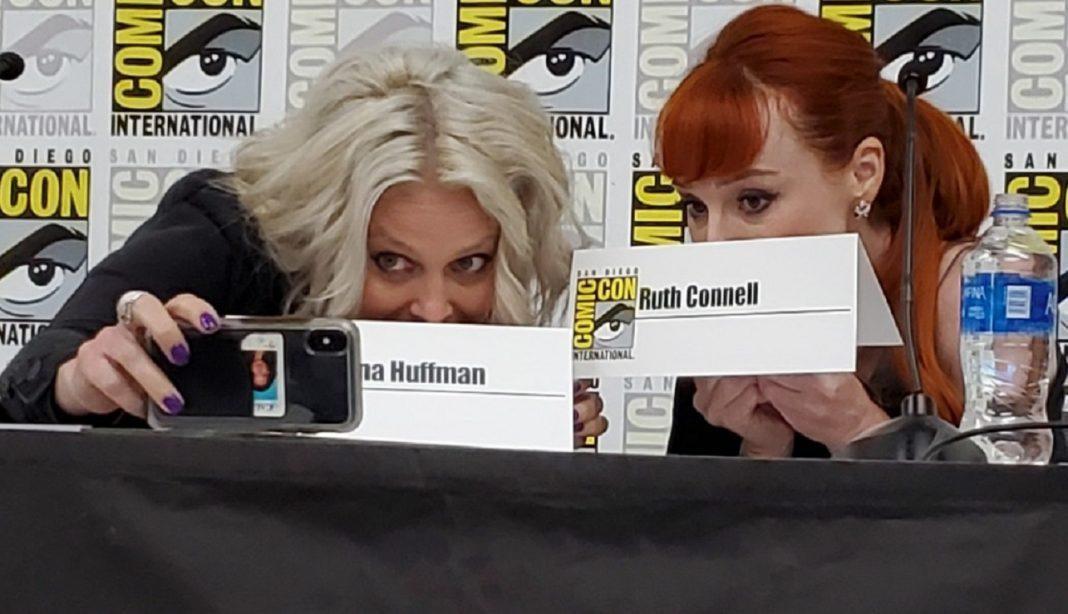 I was excited to see two of my favorite people at Comic-Con this year – “Supernatural’s” Ruth Connell (Rowena) and Alaina Huffman (Abaddon). They both joined a panel called “Beyond Scream Queens” on women in horror, which turned out to be a fascinating and thoughtful discussion.

The panelists (also including Alex Essoe of “Doctor Sleep,” Mali Elfman of “Before I Wake,” and Jocelin Donahue of “The House of the Devil”) and the moderator (John Marcotte, a dad of several daughters) noted that horror is the only genre in which women appear more than men, and discussed ways in which horror films can include feminist themes and can empower girls and women. They also mentioned that when we’re watching media of men shooting each other up that isn’t coded as horror, but if a woman stabs someone then it is.

They also talked about the lack of women behind the camera in horror films, which is sometimes presented as “there are no women who want to direct horror.” Instead, the panelists said, we have to make space for them. They talked about the importance of films like “Wonder Woman” and “Captain Marvel,” how and important it is also to have people with different life experiences behind the camera.

Mali: Women are told they have to have films already under their belts, while men are not.

Jocelin: Men are hired on their potential, women on proof of what they’ve done.

Ruth and Alaina: Female films are funded less, but they need the same resources to make the same caliber of films.

Everyone talked about their own experience both making horror films and television, and the films they watched growing up with female characters who were empowering, including Sissy Spacek’s “Carrie,” Jody Foster in “Silence of the Lambs,” and Jocelyn Laurie from “Halloween.” Alaina said that she grew up in Japan watching the three DVDs they had, one of which was “Tank Girl.”

Ruth talked about how her character on “Supernatural,” Rowena, is an empowering female figure.

Ruth: My character burned to death in my show, but I knew she was going to save herself. It was a bit too exploitative, and that felt wrong. Surprisingly, I’m the longest running woman on my show.

Mali: Actresses are sometimes pushed to do things they are uncomfortable with, because they fear they’ll lose jobs otherwise.

Ruth: I don’t get many auditions, but I have had to turn one down [when it wasn’t an appropriate role].

Moderator: Only women get attacked by serial killers in their underwear…

And, of course, there’s the “final girl” trope, in which the virginal girl suffers all the way through the film but survives because she’s a virgin. If she has sex, oops – instant death!

The panelists also talked about the difference between movies (and television) filmed with a male gaze versus a female gaze, for example “Wonder Woman” versus “Justice League.” A female director might NOT do the ‘shoot up her skirt’ view.

Alaina talked about her recent film “The Perfection.”

Alaina: It was one of the first after the Weinsteins were ousted, in the #MeToo time.

Ruth also mentioned “The Handmaids Tale” as possibly belonging to the horror genre much like how “Get Out” was.

It’s horrifying, that’s for sure!

Jocelin: That scares women for real, the idea of someone taking control of their bodies.

Ruth: And the violence in “Killing Eve” is the most fascinating ever, in some ways the most feminine.

Mali: It’s empowering for us all to understand toxic masculinity. Also that men have feelings too.

They also talked about the importance of not writing for specific genders. “Alien” ended up with a very empowering female character because it was not written with a specified gender. No one knew that Ripley was a woman until they cast Sigourney Weaver!

Alaina: Most characters don’t have to have a gender. I mean, The Doctor is female now!

I made sure to catch this panel because Ruth and Alaina are two of my favorite people. (Here they are taking a selfie and being adorable)

But I ended up really enjoying the thoughtful discussion that touched on so many important themes. The whole premise of ‘Family Don’t End With Blood,’ (which you can still get here) and most of my research as a psychologist is all about how media and the things and people we fan can have an impact on our lives, and this panel made it clear that can happen in sometimes surprising ways.

You can read Ruth Connell’s insightful and personal chapter in ‘Family Don’t End With Blood’ about how her experience on “Supernatural” has impacted her as well. And look for Alaina in “The Perfection” and for Ruth to return to “Supernatural” for its final season!