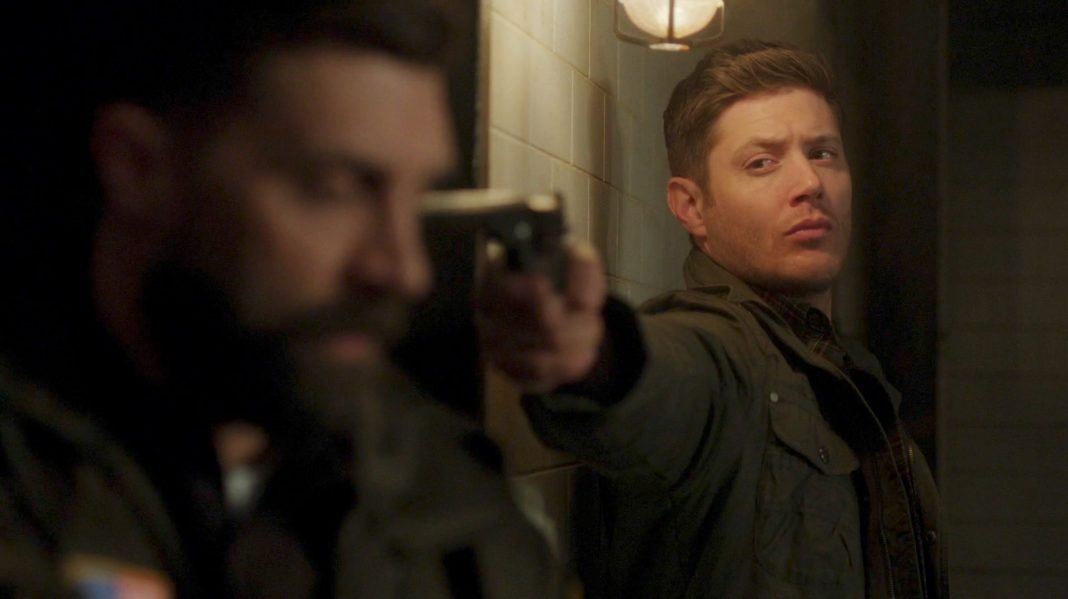 As far as monster-of-the-week episodes go, Supernatural’s The Memory Remains is a good one. Kind of reminds us of The Benders a bit. That humans are still the worst type of monsters out there. In the world of Supernatural, the monsters themselves can be harmless like werewolf Garth or vampire Benny. But the humans, like most of the members of the British Men of Letters can be terrifying. In this episode, the monster of the week is an earthbound god named Moloch. But the true monsters in this episode are the humans that take care of him.

The Memory Remains is a bit of a departure to the chilling conclusion we had in The British Invasion. Dr. Hess ordered the extermination of the American hunter community starting with the Winchesters. All it would take is for the cold-blooded Mr. Ketch to go to the bunker, say hello, walk straight to Dean’s face and shoot him between the eyes. But that would end the show early since Billie said the brothers shouldn’t be caught dead because there won’t be any coming back. Instead, Mr. Ketch gets to play Mick for a while before telling the Winchesters that they’ll be reporting to him.

Like most episodes of Supernatural, it starts off by killing the first victim, a guy named Jared. The monster’s MO is a bit strange as it baits Jared with a bag full of money. When the monster makes its appearance, you’ll immediately notice that it’s a guy in a suit with a goat mask. Then again, it looks more terrifying than the other monsters featured lately. This is one instance where the show does go back to its roots by bringing back the creepy. It’s always the woods though like in Ladies Drink Free, not that we’re complaining. Jared’s friend Darren gets wind of what’s happening and gets to see the monster hit Jared with a mallet on the head and Darren has no choice but to run.

We shift over to the bunker where Dean is still trying to reach Cas. Seems the showrunners are playing us fans with suspense on what’s happening with our favorite angel. The suspense ends on the 27th as Cas will be making a comeback, and it looks like the team will be facing Dagon. ‘Mick’ sends the boys on a hunt for the monster in Tomahawk, Wisconsin. They respond Yes and Ketch says that it’s time. Thought for a second there that Ketch is sending a team to ambush the Winchesters on the road when they could easily enter the bunker and shoot them dead. These days, they don’t seem to be too alarmed on who goes in and out of the place.

Instead, the boys reach their destination and as per procedure they meet with local law enforcement, in this case, is the local sheriff slash taxidermist Barrett Bishop who tells the boys that Jared most likely skipped town. They then meet with the only witness Darren whose credibility as a witness and as a citizen in the town is hampered by weed. He tells them that a local boogeyman named Black Bill is responsible. A monster with the head of a goat. Sam tries to figure out what it is and how it can be killed when Dean tells him that the Colt will solve their problems before trying out the local ‘cuisine.’ It’s one of the mini-highlights of the show where Dean gets to cut loose with the locals like he did in earlier seasons. This is perhaps the calm-before-the-storm episode before s&%t hits the fan with Dagon and the BMOL.

Next victim lined up is Darren himself. He gets told off by Pete, the meat plant manager for being late and smoking weed and to get ready for whatever big event the plant is having the next day. Darren however on his way home gets dragged out of his pickup like an overbooked passenger and gets hit on the head with a mallet by Black Bill.

The next morning, we see classic brotherly banter over their respective culinary choices. Sam always likes it healthy while Dean is always out for a triple bypass. Sam posits that Black Bill is a Satyr that organizes sexual orgies before getting his next victim. The viewer might associate that with the gathering during the opening scene. While Dean was out, Sam determined that Darren didn’t show up for work so they head off to the meat processing plant and talks to pissed-off Pete and later to plant owner slash sheriff slash taxidermist Barrett who tells them that Darren is sleeping off another drug induced drunken episode, when in fact, he’s in the plant’s restricted storage room calling for help and later getting eaten by the episode’s monster.

Again, the show ties to bring back its creepy aspects with all the red featured in the storage room and keeping the creature out of sight. We see bits of it like the claws and its horns but never the full creature. It’s a formula used by more successful horror flicks, or the show is trying to keep its makeup budget down. At the diner, the boys conclude that all the victims worked in the plant in some capacity and that the sheriff’s family used to own most of the town. What’s left is the plant and the family estate which they decide to investigate. ‘Mick’ checks in and the boys respond that they’re still working the case. 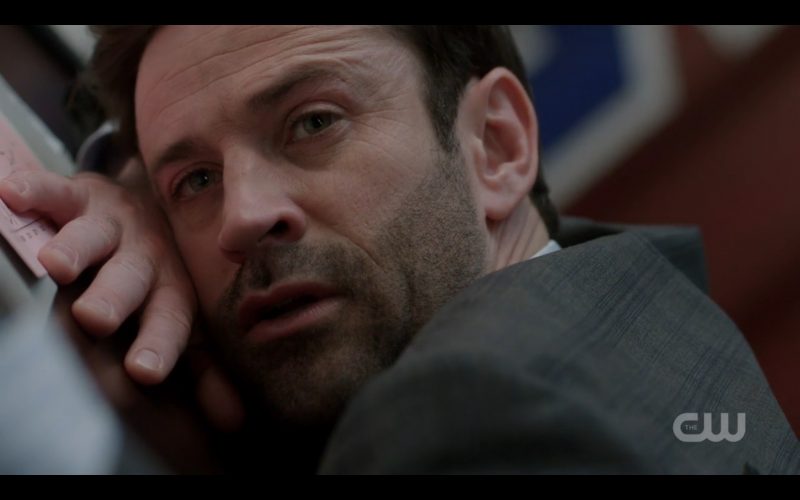 Ketch’s true goal was actually to go through everything in the bunker and know everything they possibly could on the Winchesters and at the same time retrieve the Colt. Knowing the boys were out, they pushed through with the search operation. The boys proceed to the estate where they find the requisite over-locked basement and what seemed like a murder room. Sheriff Bishop finds them there, but the boys get the jump on him. He explains that all the Black Bill business was actually his family’s secret. They were keeping and feeding an earth god Moloch in the basement in exchange for riches. That his family was responsible for all the missing persons in town. Barrett was actually the nice guy in the family who put a stop to the practice and hoped that Moloch would starve to death in his cage. Unfortunately, creatures like Moloch are often immortal. They find out that the cage is empty and that Moloch is loose somewhere.

They hear a scuffle and Dean goes to investigate. Dean sees Black Bill but gets knocked out during a struggle and is dragged off to the plant where Pete explains that he’s Barrett’s half-brother who kept lucking out because he was illegitimate. The practice resumed once again when Pete accidentally found Moloch in the basement. Here’s another of the episode highlights. Laughed out loud at the look on Dean’s face when Pete said the following line.

Pete was at the house to get Barrett but got Dean instead. He drags Dean off to the storage room for Moloch.

While going through the bunker, Ketch finds Mary’s old photo with young Dean and looks at it with a creepy version of what seems like sentiment. It’s another of the episode’s highlights. As previously mentioned, Ketch has developed an odd attachment to Mary and will factor later on in the final confrontation against the BMOL.

Sam and Barrett track down Dean to the plant. Dean faces off with Moloch in a cat and mouse game while Pete goes up against Sam and Barrett. Pete knocks Sam out and overpowers Barrett. Sam manages to shoot Pete before he kills Barrett and goes on to kill Moloch using the Colt. Moloch melts to goo upon dying. Barrett was hoping to leave a positive legacy by starving Moloch and giving something to his half-brother which unfortunately didn’t end well. Back at the bunker, Dean thought about their own legacy as to what will happen and who will remember them in case they die. Pretty sure other fans felt a certain foreboding about the show’s future when the brothers discussed what their legacy was going to be. Well we know a 13th season is certainly on the way and the show will hopefully reach the 300th episode milestone. That dialogue still felt depressing though. In a fit of nostalgia, the brothers decide to carve out their initials on the table, the same way they did on the Impala accompanied by flashback videos worthy of a show’s finale. Now that was sort of terrifying.

The final scene is when they report back to Mick only to find out that they were reporting to Ketch. We all know where Mick went, of course. Again we see creepy Ketch looking at Mary’s photo while listening to Dean say how much Ketch creeps him out. This episode should have fans begging for more to see what happens next. This last scene gives more value to this otherwise filler monster of the week episode.

I took it that the BMOL would have all info on the Winchester’s allies by now but as shown before, hunters are not really easy when it comes to information. By rummaging through their things, the BMOL may now have information on everyone like Garth, Kate, Jodi, Donna, Claire and Eileen which at some point makes viewers concerned for their safety. How about a poll? Who bites the dust during or after the next episode with Castiel? Hopefully, zero right? Overall, it’s a good episode and still enjoyed it even after reviewing it a couple of times for this review.