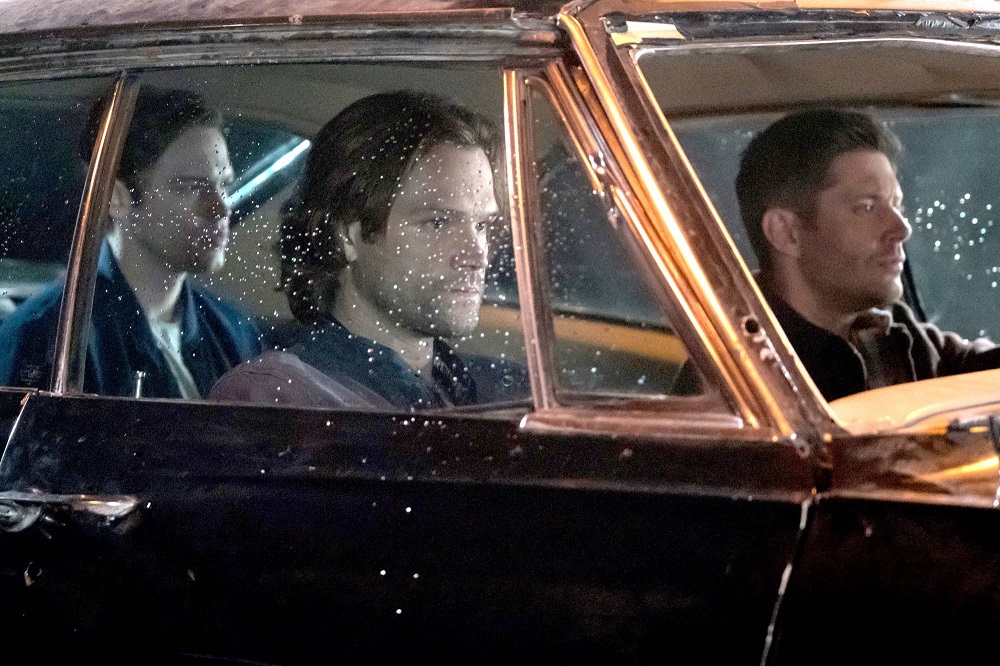 These are my thoughts on the latest Supernatural episode: “The Bad Place,” which is just as awesome as “War of the Worlds.” If Season 13 keeps this up, it could become one of the series’ best seasons. Hats off to writer Robert Berens and director Phil Sgriccia. And if there was ever a Supernatural film, this is a candidate.

The screenplay was great, the concept was interesting, and the action and suspense were intense. Major spoiler alert here as I can’t praise on this episode without describing a few things. This episode also marks the second backdoor pilot to the spinoff Wayward Sisters (the first was Patience), and it’s a good backdoor pilot. This means that the production team is serious about the spinoff, unlike that awful Bloodlines thing.

The show often starts with someone dying, in this case Derek, a Native American artist who is actually a dreamwalker. Dreamwalkers are supposed to see other worlds, in this case other Earths or realities, and Jack is for some reason interested in Apocalypse world. The one who supposedly kills him is Jack who seemed to have gone down the deep end. Just when Dean has grown to like him. Jack then approaches a girl named Kaia who can do the same thing. Alex Culvert and the writers had me fooled making me think he’s gone serial dreamwalker killer. 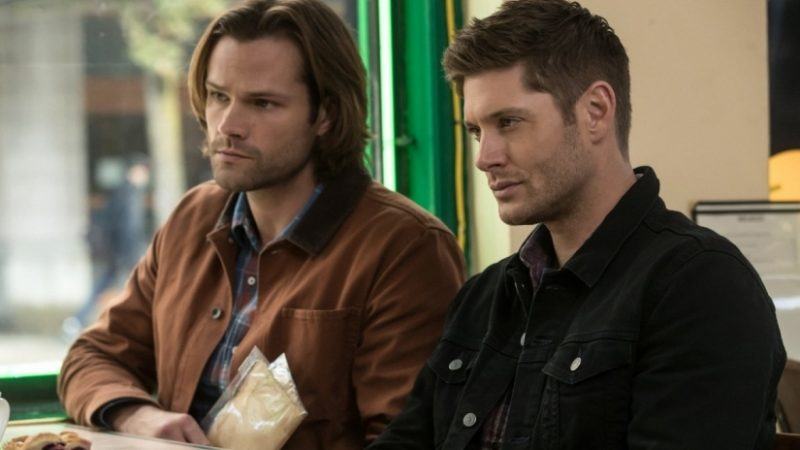 The Winchesters (Jensen Ackles, Jared Padalecki catch up with Jack and things get cleared up, clear as crystal for mom-is-hopelessly-dead Dean. Jack has seen Mary trapped by Michael in a torture cage similar to Lucifer’s. So, they save Kaia from a bunch of bad angels who were actually responsible for Derek’s death. The brothers want Kaia’s help in saving Mary. Messed-up Kaia doesn’t want to, but Dean, desperate to save Mary forces her to come at gunpoint. Kaia, who can’t control her powers yet is limited to only one alternate earth, a world of monsters. Jack makes her realize she can see more and that she can use her powers for good. They try to go to South Dakota where the walls between worlds are thin enough for Jack to break through with Kaia’s help but they get cornered by angels to an abandoned boat. Sam wards the boat but the angels try to break through. Kaia volunteers to dreamwalk so they can escape. 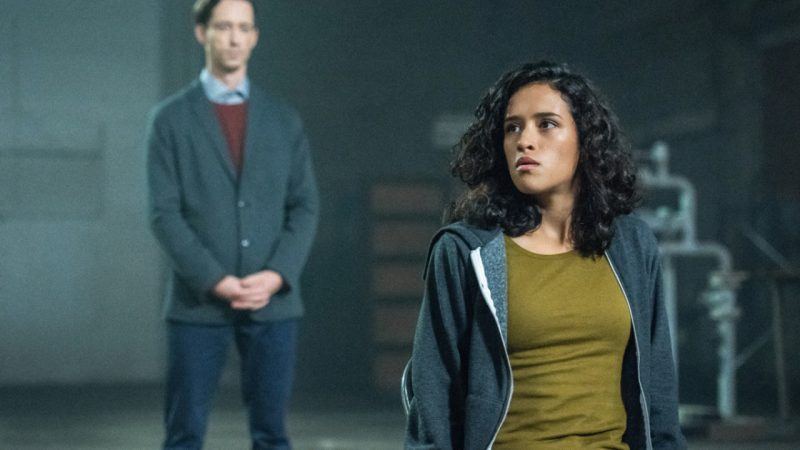 Meanwhile, Patience’s visions continue and distract her from her studies leaving her father frustrated. She gets another extreme vision of Jodi and decides to leave forcing her father to tell her not to come back. She arrives at Jodi’s to tell her that something bad is coming. Back at the boat, it’s revealed to us that there are more worlds out there than just Apocalypse world and Kaia’s Bad Place is one of them. As the angels try to break Sam’s sigil wards with some intense magic they haven’t done before in past seasons, Jack and Kaia alternate between Apocalypse and The Bad Place until a portal opens up. The angels are disintegrated and everyone in the boat disappears. Jack arrives to where Mary is, Kaia appears on the side of a road while Sam and Dean end up in the Bad Place. What a bad place it is. The final scene is reminiscent of the 1998 Godzilla film. The brothers look like they are way out of their league and the effects guys have their work cut out for them. The foot could probably belong to the giant monster in Derek’s painting. 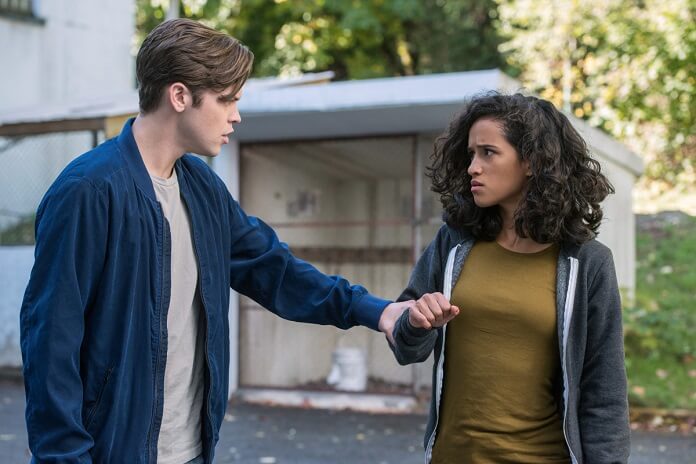 Alternate realities have lately become quite a staple in fantasy and science-fiction, and it has just become a major plot point in Supernatural. It’s almost become a norm in comics especially with DC and their awesome Dark Nights Metal storyline and with the Arrow TV series’ Crisis on Earth X. I used to enjoy and follow Sliders until Jerry O’Connell’s departure.

Alternate realities are not new to the series either as they’ve toyed with the idea in ‘What is and What Should Never Be, It’s a Terrible Life and The French Mistake, though the first two aren’t actual alternate universes. This alternate reality hopping could also figure into that upcoming Scooby-Doo episode. What’s different about The French Mistake is that the brothers totally assumed/replaced the personas of their counterparts, but through Jack’s method, everyone can be separate from their counterparts if there are any. Just thought that if the brothers ever need a way out of the Bad Place, they could try the spell in that episode in place of the spell Kevin did in War of the Worlds (if you haven’t seen that yet, they have a Kevin there). That is if the spell isn’t dependent on an original starting point like Bobby’s window. There are other humans in the Bad Place’s seemingly prehistoric reality especially that witch that figured into Patience’s visions and might end up being the Wayward Sister’s antagonist. Anyway, the prospect that the brothers could end up fighting Godzilla is awesome.

Castiel (Misha Collins) is strangely absent in this episode as the brothers could have called him up after Jodi’s message. The logic here is that Sam and Dean would have to kill Jack if he did go dark side and Cas would get in the way. And there would also be Lucifer (Mark Pellegrino) to deal with. Sam seemed sad but resigned that they’d have to kill Jack in that I-told-you-so moment while Dean also genuinely let out that he liked Jack, and now seemed closer after getting the full story. It was nice to see Jack again, and his character is so well written and his acting is great. Speaking of acting, as Lynn pointed out, the look on Dean’s face was priceless when he found out about Mary. You know something will happen so I wasn’t surprised when he forced Kaia to help and he wasn’t about to let a messed-up girl’s personal issues get in the way of saving his mother. 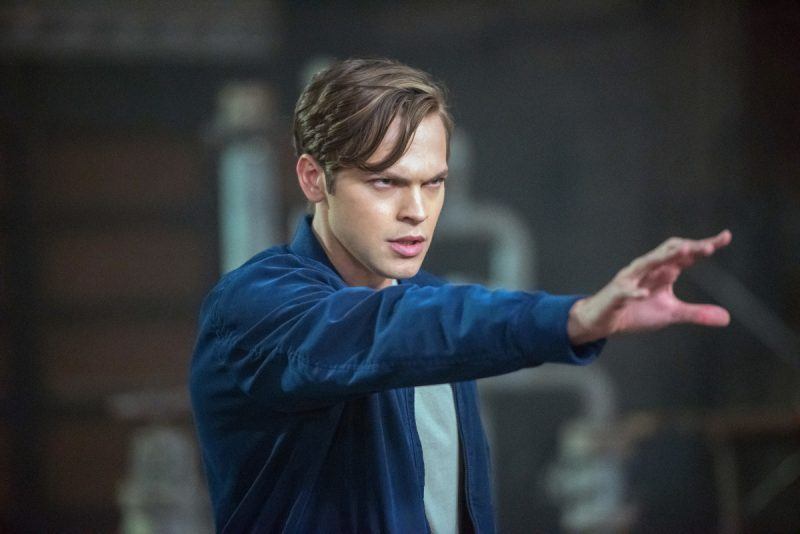 It’s just sad that the angels in this series have become no different than their demonic counterparts, but their actions can be justified by their one-track minds and the writers’ need for guide rails to move the story along. Again, there’s some good action here with the fights and the car chase. The episode did feel like a mid-season finale after knowing in advance that it is. It’s strange that the brothers didn’t use the banishing sigil for some reason in order to create the suspenseful ward-erasing scene but it worked out nicely because Kaia needed to be badly focused for that awesome finale.

Now I’m not a fan of constantly moving cameras but they did it here slightly for added effect. As mentioned, if there is ever a Supernatural film, this and the upcoming episode will make for a great film. The upcoming episode will be entitled “Wayward Sisters,” the formal backdoor pilot to the spinoff series. They women could spin off their own adventure or be instrumental in bringing everyone back giving, them more impact in the SPN universe and validating their need for a separate series. Overall, this episode is awesome. Can’t wait for January.

Editor’s Note: A correction was made to the original article. Robert Berens was inaccurately given the first name of Richard and that change was made thanks to our new SPN writer who apparently has an eagle eye which we appreciate.