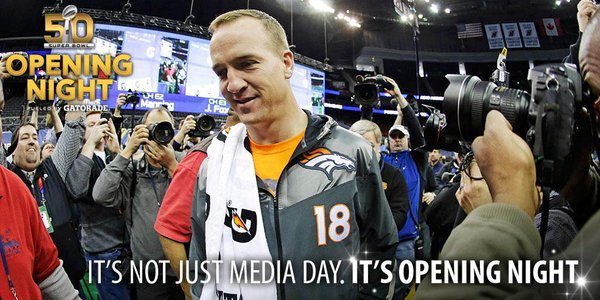 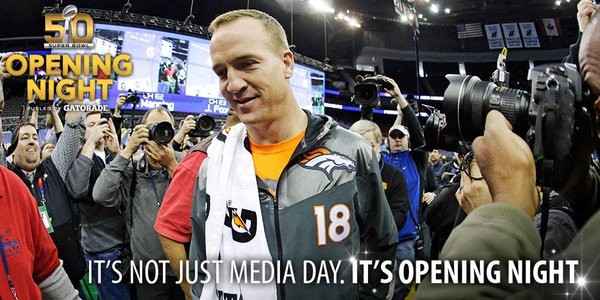 Super Bowl 50 is this Sunday.

I don’t know about you, but the suspense of waiting two weeks for the Super Bowl is just way too much. I’m so nervous. Between school, work, and worrying about Denver Broncos quarterback Peyton Manning as he prepares for what may likely be his last professional football game, I don’t have time to do much else—including breathe.

Thankfully, the NFL has “Super Bowl Opening Night,” also known as Super Bowl 50 Media Day, to relieve some of the stress. Puppets photo-bombing players and Pick Boy from Nickelodeon asking the athletes tough questions may not completely ease your mind, but if they make you laugh once or twice then they’re doing a pretty good job.

And when the inquisitive (and oddly dressed) reports came chirping, The Sheriff provided us with some much-needed humor to break us away from the monotony of the incessant Super Bowl hype. He wouldn’t answer questions about the possibility of retirement, and he wouldn’t say much about his arm other than that it “feels okay,” but he was ready to chat about Cam Newton and even the HGH controversy.

“I know what they will find,” said Manning, welcoming the NFL’s investigation into the reports Al-Jazeera published which have since been recanted and led to multiple lawsuits against the news company. “A big fat nothing. I know the rules and respect the rules.”

As for Cam, Peyton stated he has no doubt that Newton will be the NFL MVP come Saturday night but that his own scrambling shouldn’t be overlooked.

“If I rush for a touchdown on Sunday,” said Peyton when asked about Newton’s excessive celebrations, “Believe me, I’ll be celebrating.”

Manning went on to say that he wouldn’t be surprised if the Carolina Panthers keep a defensive spy ready for him after studying that impressive 12-yard scramble of his in the AFC Championship Game against the New England Patriots.