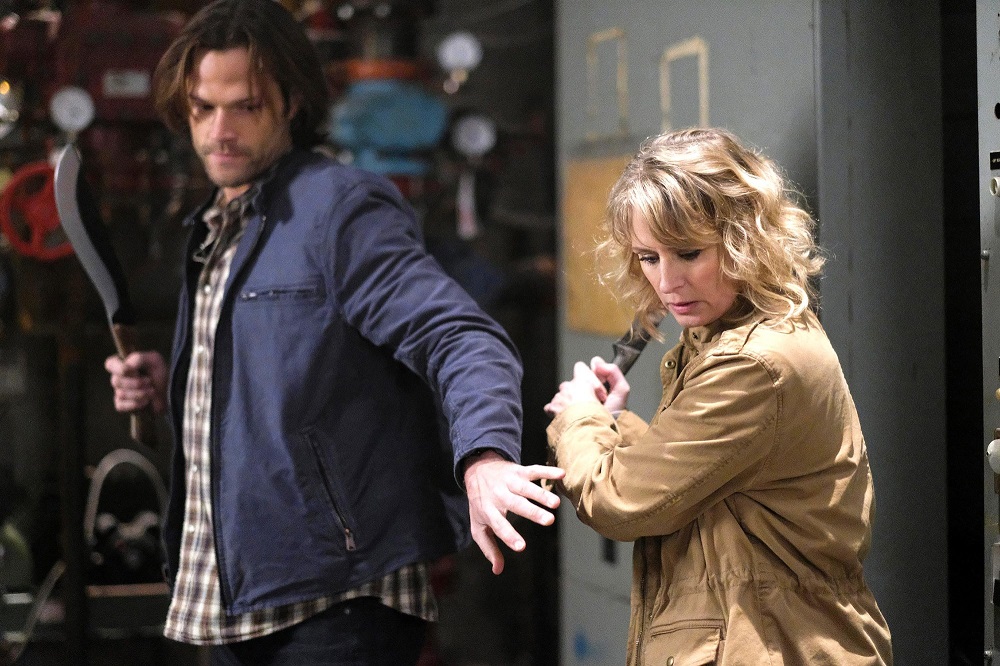 After that Supernatural gaffe with Gavin, Crowley’s son in the last episode, we have another noteworthy thing going with this season’s 14th episode aptly entitled The Raid. The question is who raids who? And how will both brothers take the bomb mother Mary dropped in the previous ep? Enjoy the forthcoming recap unless you haven’t seen the ep yet, (unfortunately for some, the current season) and don’t enjoy us spoiling the fun, skip the article, bookmark this page, watch the show and come back and visit.

The episode begins in the bunker where mom is explaining to Sam and Dean why she’s working for the British Men of Letters. This immediately picks up from the previous episode and from the previous article, I hoped that the boys would be more receptive of their mother’s decision. We all know how vindictive Dean can be when someone close makes a mistake and how Sam acts as the calm voice. But in this case, Dean is angry as expected and Sam agrees after what Lady Toni did to him. Finding out that it’s been going on for months including the mission against Ramiel, Dean pins the blame of Castiel’s near death on Mary, not to mention Wally’s. Dean finally calls her out on her absence in death as well as in her new life, however illogical, but since Mary’s adamant on working with the BMOL instead of sticking with them, the boys throw their mom out even as far as Dean calling her by name. Ouch.

The next scene takes us three days later to the British Men of Letters headquarters in the US. It’s quite surprising as many of us thought that there are at least two BMOL operatives (Mick and Ketch) in the US. The base looks impressive reminiscent of another organization in another supernatural-based show; the Initiative in Buffy the Vampire Slayer. Guess this author got his wish to see an organized tech-rich group of people hunting down the supernatural. Back to Mary, she looks at her phone and her three days-worth of unanswered texts to her boys. 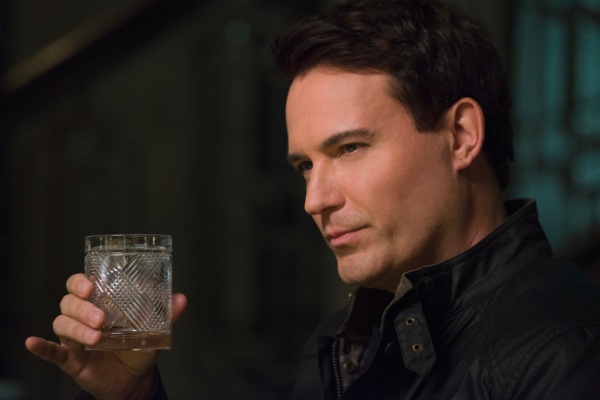 Ketch reports to Mick about another boring successful mission to terminate vampires. Mick is more interested in getting all the Winchesters working for the BMOL to which Ketch disagrees. Mick explains that their superiors want the boys onboard in order to entice the rest of America’s hunters to work for them. Next morning, Dean is itching for a case to work on in order to help him cut loose. After a long time, in the series, Dean finally talks about his issues when asked and they talk about why Mary chose to work with the BMOL. Sam tries to make sense of it while Dean remains hurt and stubborn. He calls Sam out on always being the middle guy and forces him to solidly choose sides. Dean leaves, and Sam reads the text message from Mary he hid from Dean. Mary is calling for an urgent meetup.

Sam arrives at the BMOL headquarters to meet with Mary. Mary explains the mission and why she took it. Without monsters to hunt, the boys can finally live normal lives as they should have and as their mother, she took it upon herself to help the BMOL succeed. She lets him in and shows him around. Mick welcomes him and lets him in on the vampire eradication mission they’ve been working on.

Dean arrives in the bunker to find an absent Sam and absent drinks. Ketch shows up bearing premium scotch while the rest of the BMOL contacts him in vain. Back at HQ, like any other meeting, it begins with introductions. Mick introduces Pierce, a hunter at Baton Rouge, Alton head of RnD and Serena, head of security. They discuss the eradication of all vampire nests in the Midwestern Region all except for one nest which they intend to raid. Sam seems impressed with their success. The BMOL intend to eradicate all vampires in the US up to the alpha which has not been seen since season 7. 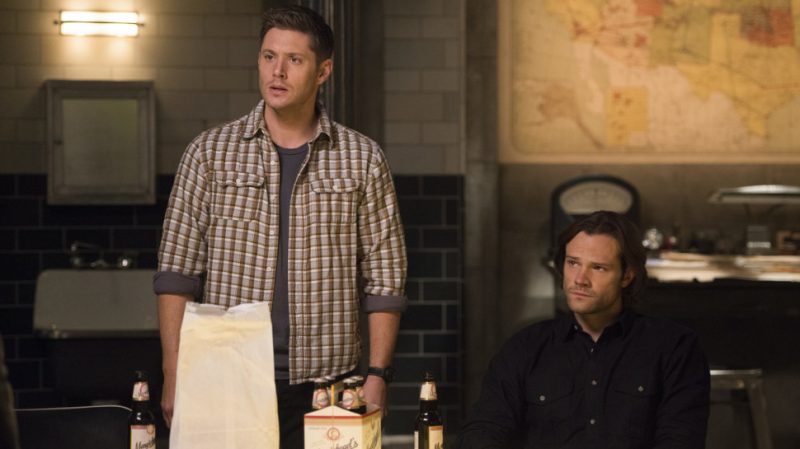 In the next scene, we see a female vampire refugee from a dead nest get taken in by the remaining one. The nest leader says that the nest is a fortress and can’t easily be entered until the alpha vampire shows up. We next see Ketch chatting it up with Dean while they drink his scotch. Ketch states his feelings about the brothers and Toni and tells Dean that he’d fit quite well in the BMOL through their commonly shared killer instincts. Ketch decides to leave and tells Dean about the vampires he’s about to kill which catches Dean’s interest. Ketch takes Dean to the Morest Hotel which the others were supposed to raid, but they only find the female vampire refugee. The nest actually went after the BMOL HQ.

Ketch beats up the female vampire to get the others’ location instead of quickly killing her. Dean couldn’t take it and stops Ketch and promises the vampire a quick death. She tells them what’s going on and they quickly head there. The BMOL also discover the attack and lock the base down, but the vampires force themselves in. Sam and Mary manage to capture one while the others spread out. The nest leader tells them that the alpha led them to the base. According to BMOL intel, the alpha is in Morocco, but Sam says otherwise as we know he’s in the US and gave the boys his blood to stop the Leviathans. After killing the vamp, they discuss on how to defend themselves. Except for Pierce and Ketch, no one in HQ has any killing experience including Mick. Due to a lack of weapons and the need to kill the alpha, Mick was forced to take out the Colt Mary stole from Ramiel. Sam seemed appalled at Mary but focuses on the task at hand. The Colt didn’t come with bullets, but Sam lists down the recipe to make them. While Mick makes the bullets, the hunters go to the armory for the anti-vampire device or AVD. Sam holds off the vamps while Pierce and Mary go for the device.

Pierce suddenly shows up as Mick finishes the bullets, but it was a setup. Alton and Serena get killed, and the alpha arrives to threaten to kill Mick live as they open a channel to London to force the BMOL to stop their operation. Pierce was actually an agent of the alpha and fed the BMOL the wrong information. Just like Eve, the Mother of All, who was ticked off at Crowley and Samuel’s monster manhunt, the alpha vampire decided to step in because of all the dead vampires. So what happened to Mary? 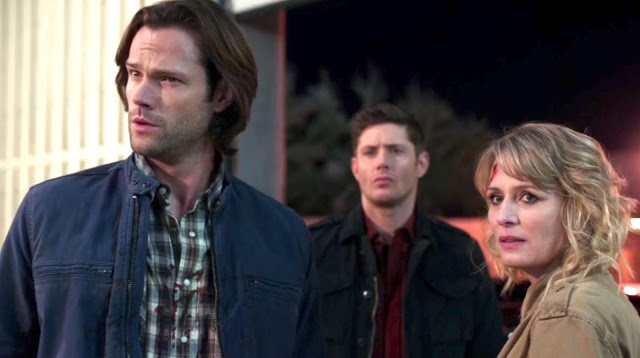 Sam finds Mary unconscious, knocked out by Pierce who destroys the AVD. Mary is okay, and they head back to Mick. Mary knocks out Pierce and Sam points the empty colt at the Alpha. Sam is aware the gun is still empty as Mick is holding one of the bullets while the alpha bluffs that the gun can’t kill him. He forces Sam to bargain for release. Sam bargains for himself and Mary and the alpha can have the rest of the BMOL. Mick gets angry and ‘attacks’ Sam but was actually passing the bullet on as Mary distracts the alpha. Sam makes the shot and kills the alpha.

Mick looked devastated to see his dead staff. He confronts Ketch about his whereabouts and Ketch tells him that he was trying to convince Dean. Dean discovers Sam and Mary together but sets it aside as the only thing that mattered to him was getting to Mary. Dean and Mary settle their differences, and all seems well to them. Sam goes over to talk to Mick and says that he’s in, that the death of the alpha vampire was a significant win for the world, but it will take time to convince Dean.

As described, this episode is quite big as Sam has taken the plunge to the BMOL with Mary. Dean may have reconciled with his mother but this time it’s Sam who’s keeping a secret. Probably not for long. Dean doesn’t really seem to mind the BMOL so much as he liked Ketch’s grenade launcher some time back and went out with Ketch to hunt. Dean will remain suspicious though as Ketch seemed sociopathic. Guess we’ll see some new dynamics in future episodes just like when Buffy joined The Initiative. This is probably a good mother’s day episode too. No matter how much mom pisses you off, it’s still mom who you love, have to talk to and even try to save in the end. Family is family. Also, Dean grows up a little in this episode by telling Mary his latent feelings, accepting that Mary is not the mother he was pining for as a child. That Mary is an adult, a hunter and as a real person who has her own life to live and not necessarily tied down to him and Sam. And as for Sam, he’s grown a bit too. It’s true that Sam’s character is often playing things safe, in character and also in dialogue. To be honest, I struggled to find notable quotes for Sam. And even though the brothers’ dynamics is near perfect, resulting in a long-running show, I find Sam’s character somewhat lacking in growth or just plainly complementing Dean’s character, and hardly the other way around. Way to prompt character growth by including it in the dialogue.

Cas and Crowley are absent in this episode which is quite welcome as we need to focus more on the Winchesters. It can get difficult to juggle between several well-loved characters. This gives Mary more to do as several fans find her character stale and even questioning why the writers wrote her into Dean’s mind instead of John, for The Darkness to bring back. Well, we know John’s having the time of his life swinging a barbed bat. It’s also high time we got to know more about the British Men of Letters, and this is quite a revelation. Turns out they’re not as mighty as we know them and like everyone else, surprise can get the better of them. Overall, this is a good episode; I guess three and a half out of five.