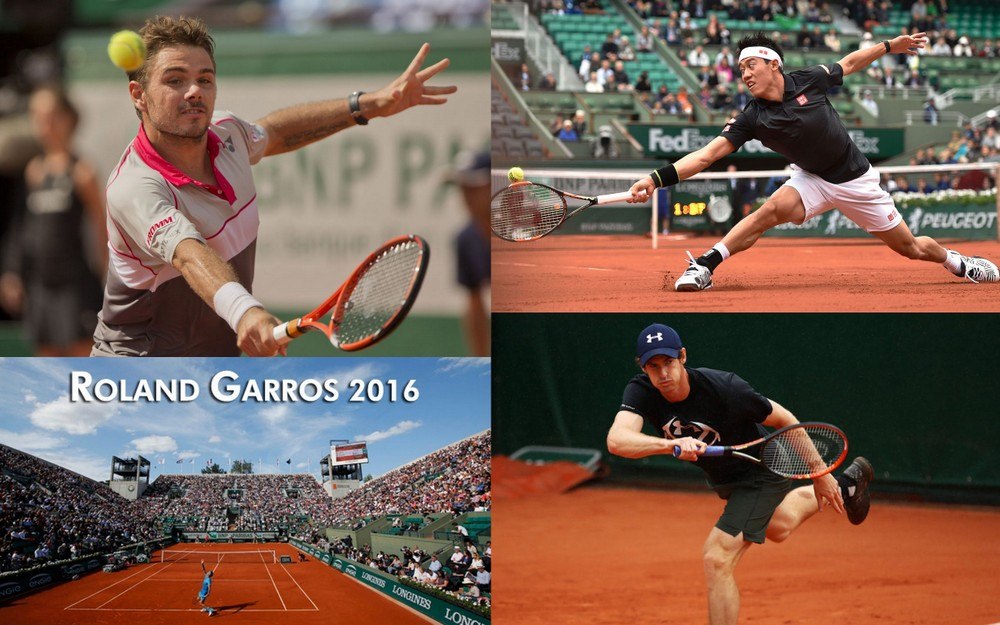 Two of the top players in the French Open men’s singles draws have flirted with elimination so far at the 2016 event. However, thus far all the tournament favorites have managed to stay alive – either with lopsided victories or close shaves. Day 4 of the event featured Stan Wawrinka, Andy Murray, and Kei Nishikori with all three players booking their spots in the third round.

Wawrinka, who had big troubles in the opening round against Lukas Rosol, had an easier time on Wednesday in the second round. The defending champion faced Taro Daniel, a very unproven player in majors at this point in his career. Wawrinka did win their Wednesday match in straight sets. However, the match could very well have gone to a fourth set with Daniel up 2-1 if not for the three seed coming through during clutch moments.

For instance, in the first set, Daniel held two set points in a tiebreaker at 6-4. After Wawrinka persevered through that it seemed for a while that Daniel was going to go away easily. However, the Japanese player challenged Wawrinka in the third set again, going up a break. True to form, late in that set it was Wawrinka who won the big points again, and he posted a straight-sets win 7-6, 6-3, 6-4 in a match that was closer than the scoring line perhaps makes it look.

Murray advanced to the third round as well on Wednesday, but there’s still good reason to raise some eyebrows toward the two seed. Through two matches at Roland Garros 2016 the Scot has played ten sets of tennis already. Murray survived on Wednesday in the second round against Mathias Bourgue. However, the young player had Murray’s full attention. Much like he did in the opening round against Radek Stepanek, Murray found a way through with the line score of 6-2, 2-6, 4-6, 6-2, 6-3.

Murray’s struggles to victory against peripheral players are quite puzzling based on the fact that he beat both Novak Djokovic and Rafael Nadal in the weeks leading up to the French Open. Stepanek entered the tournament ranked just 128th in the world while Bourgue entered the tournament ranked 164th in the world. Neither seemed to be players that could keep Murray on the court for such lengthy periods of time at this point in their careers, yet each had an opportunity to pull off a shocking upset.

With Murray and Wawrinka both struggling to play their best against the peripheral competition, you have to wonder if the stronger players to come will be as lenient as the competition was in the early rounds. For the moment, Wawrinka looks kind of safe as he has Jeremy Chardy up next. The Frenchman is a player who rarely makes major headlines on tour. Murray also looks pretty safe as he has Ivo Karlovic up next. While Karlovic has made plenty of headlines over his career, he is 37 years old and coming off of a marathon match. After winning 12-10 in the 5th in the second round, I would be very surprised if Karlovic had anything left in the third round. In fact, my expectation is that Murray will receive a walkover.

All in all, Nishikori really has to be liking his chances at the 2016 French Open. On Wednesday he had no trouble with Andrey Kuznetsov, eliminating the Russian in a very comfortable three-set match 6-3, 6-3, 6-3. Nishikori is now into the third round with as good of a chance to make the final as anyone. After all, he shares a draw to the championship with Wawrinka, who appears a little off, and Murray – who appears more than a little off.