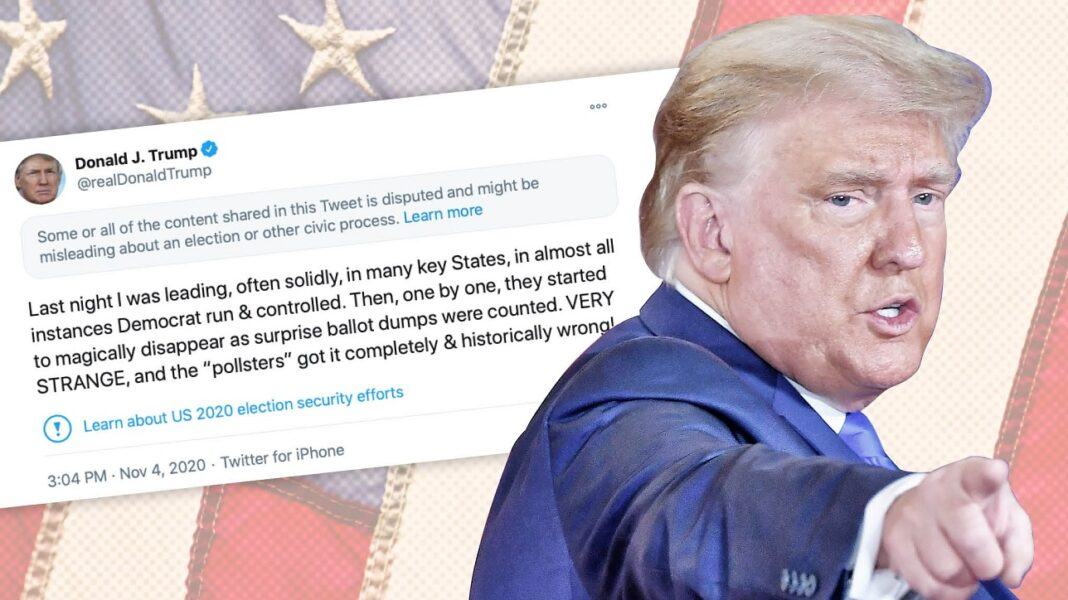 Facebook, Twitter and YouTube kept their promise to stay on full alert when it came to a true 2020 election result as President Donald Trump was part of the misinformation flow. What started as seemingly smooth sailing on Election Day was quickly put to the test by the president and his administration.

Several months ahead of the election, Facebook, Twitter and YouTube promised to clamp down on election misinformation, including unsubstantiated charges of fraud and premature declarations of victory by candidates. And they mostly did just that — though not without a few hiccups. Tuesday saw most of these plans go without any issues. Labels were added to misleading post by Trump and others that there weren’t any immediate outcomes to the presidential race. News anchors on TV cited and applauded those fact-checks by Twitter and Facebook.

But overall their measures still didn’t really address the problems exposed by the 2020 U.S. presidential contest, critics of the social platforms contend.

“We’re seeing exactly what we expected, which is not enough, especially in the case of Facebook,” said Shannon McGregor, an assistant professor of journalism and media at the University of North Carolina.

One big test emerged early Wednesday morning as vote-counting continued in battleground states including Wisconsin, Michigan and Pennsylvania. President Donald Trump made a White House appearance before cheering supporters, declaring he would challenge the poll results. He also posted misleading statements about the election on Facebook and Twitter, following months of signaling his unfounded doubts about expanded mail-in voting and his desire for final election results when polls closed on Nov. 3.

So what did tech companies do about it? For the most part, what they said they would, which primarily meant labeling false or misleading election posts in order to point users to reliable information. In Twitter’s case, that sometimes meant obscuring the offending posts, forcing readers to click through warnings to see them and limiting the ability to share them.

“What we actually saw on Election Day from the companies is that they were extremely responsive and faster than they’ve ever been,” said Graham Brookie, the director of the Atlantic Council’s Digital Forensic Research Lab. But now, he said, misinformation was solely focused on the results and undermining them.

“You have a hyperfocused audience and a moment in time where there is a huge amount of uncertainty, and bad actors can use that opportunistically,” he said.

For instance, Google-owned YouTube showed video of Trump’s White House remarks suggesting fraud and premature victories, just as some traditional news channels did. But Google placed an “information panel” beneath the videos noting that election results may not be final and linking to Google’s election results page with additional information.

On Tuesday, as Americans voted across the country, falsehoods about broken voting machines and biased poll workers popped up repeatedly. But the companies weren’t tested until Mr. Trump — with early results showing how tight the race was — posted on Twitter and Facebook just before 1 a.m. Eastern time to baselessly lash out at the electoral process.“They are trying to STEAL the Election,” Mr. Trump posted on the sites, without being specific about who he meant.

On Wednesday morning, Twitter added more labels to posts from Mr. Trump. In one, he tweeted that his early leads in Democratic states “started to magically disappear.” In another message, Mr. Trump said unnamed people were working to make his lead in the battleground state of Pennsylvania “disappear.”

Twitter also applied other labels to posts that falsely asserted victory. One was added to a post by Ben Wikler, head of the Democratic Party of Wisconsin, in which he asserted prematurely that Joseph R. Biden Jr. had won the state. The Associated Press and other news outlets later called Wisconsin for Mr. Biden, though Mr. Trump called for a recount.

On Wednesday afternoon, Twitter also affixed context to tweets from Eric Trump, one of Mr. Trump’s sons, and Ms. McEnany when they preemptively claimed that Mr. Trump had won in Pennsylvania, even though the race there had not been called. The company also fact-checked other assertions from Mr. Trump claiming victory in several battleground states such as North Carolina and Georgia, where the race has not been called, and restricted his false statements about voter fraud from being shared.

“As votes are still being counted across the country, our teams continue to take enforcement action on tweets that prematurely declare victory or contain misleading information about the election broadly,” Twitter said.

“They’re just appending this little label to the president’s posts, but they’re appending those to any politician talking about the election,” said McGregor, who blamed both the tech giants and traditional media outlets for shirking their responsibility to curb the spread of misinformation about the election results instead of amplifying a falsehood just because the president said it.

“Allowing any false claim to spread can lead more people to accept it once it’s there,” she said.

The flurry of Trump claims that began early Wednesday morning continued after the sun rose over Washington. By late morning, Trump was tweeting an unfounded complaint that his early lead in some states seemed to “magically disappear” as the night went on and more ballots were counted.

Twitter quickly slapped that with a warning that said “some or all of the content shared in this Tweet is disputed and might be misleading about an election or other civic process.” It was among at least three such warnings Twitter applied to Trump tweets Wednesday, which make it harder for viewers to see the posts without first reading the warning; it did the same on a post from another individual that Trump sought to amplify.

Much of the slowdown in the tabulation of results had been widely forecasted for months, because the coronavirus pandemic led many states to make it easier to vote by mail, and millions chose to do so rather than venturing out to cast ballots in person. Mail ballots can take longer to process than ballots cast at polling places.

In a Sept. 3 post, Facebook CEO Mark Zuckerberg said that if a candidate or campaign tries to declare victory before the results are in, the social network would label their post to note that official results are not yet in and directing people to the official results.

Facebook also issued a blanket statement on the top of Facebook and Instagram feeds on Wednesday noting that the votes for the U.S. presidential election are still being counted.

Twitter was a bit more proactive. Based on its “ civic integrity policy,” implemented last month, Twitter said it would label and reduce the visibility of Tweets containing “false or misleading information about civic processes” in order to provide more context. It labeled Trump’s tweets declaring premature victory as well as claims from Trump and others about premature victory in specific states.

The Twitter and Facebook actions were a step in the right direction, but not that effective — particularly in Twitter’s case, said Jennifer Grygiel, a professor at Syracuse University and social media expert.

That’s because tweets from major figures can get almost instant traction, Grygiel said. So even though Twitter labeled Trump’s tweets about “being up big,” and votes being cast after polls closed and others, by the time the label appeared, several minutes after the tweet, the misinformation had already spread. One Wednesday Trump tweet falsely complaining that vote counters were “working hard” to make his lead in the Pennsylvania count “disappear” wasn’t labeled for more than 15 minutes, and was not obscured.

“Twitter can’t really enforce policies if they don’t do it before it happens, in the case of the president,” Grygiel said. “When a tweet hits the wire, essentially, it goes public. It already brings this full force of impact of market reaction.”

Grygiel suggested that for prominent figures like Trump, Twitter could pre-moderate posts by delaying publication until a human moderator can decide whether it needs a label. That means flagged tweets would publish with a label, making it more difficult to spread unlabeled misinformation, especially during important events like the election.

This is less of an issue on Facebook or YouTube, where people are less likely to interact with posts in real time. YouTube could become more of an issue over the next few days, Grygiel suggested, if Trump’s false claims are adopted by YouTubers who are analyzing the election.

Unlike Twitter, Facebook did not restrict users from sharing or commenting on Mr. Trump’s posts. But it was the first time Facebook had used such labels, part of the company’s plan to add context to posts about the election. A spokesman said the company “planned and prepared for these scenarios and built the essential systems and tools.”

YouTube, which is not used regularly by Mr. Trump, faced fewer high-profile problems than Twitter and Facebook. All YouTube videos about election results included a label that said the election might not be over and linked to a Google page with results from The Associated Press.But the site did encounter a problem early on Tuesday night when several YouTube channels, one with more than a million subscribers, said they were livestreaming election results. What the live streams actually showed was a graphic of a projection of an election outcome with Mr. Biden leading. They were also among the first results that appeared when users searched for election results.

On Wednesday, One America News Network, a conservative cable news network with nearly a million subscribers on YouTube, also posted a video commentary to the site claiming that Mr. Trump had already won the election and that Democrats were “tossing Republican ballots, harvesting fake ballots and delaying results” to cause confusion. The video has been viewed more than 280,000 times.

Farshad Shadloo, a YouTube spokesman, said the video did not violate the company’s policy regarding misleading claims about voting. He said the video carried a label that the election results were not final. YouTube added that it had removed ads from the video because it did not allow creators to make money off content that undermined “confidence in elections with demonstrably false information.”

Alex Stamos, director of the Stanford Internet Observatory, said the tech companies still had a fight ahead against election misinformation, but were prepared for it.

“There will always be a long tail of disinformation, but it will become less impactful,” he said. “They are still working, for sure, and will try to maintain this staffing level and focus until the outcome is generally accepted.”

But Fadi Quran, campaign director at Avaaz, a progressive nonprofit that tracks misinformation, said Facebook, Twitter and YouTube needed to do more.“Platforms need to quickly expand their efforts before the country is plunged into further chaos and confusion,” he said. “It is a democratic emergency.”

“Generally, platforms have policies in place that are an attempt to do something, but at the end of the day it proved to be pretty ineffective,” Grygiel said. “The president felt empowered to make claims.”