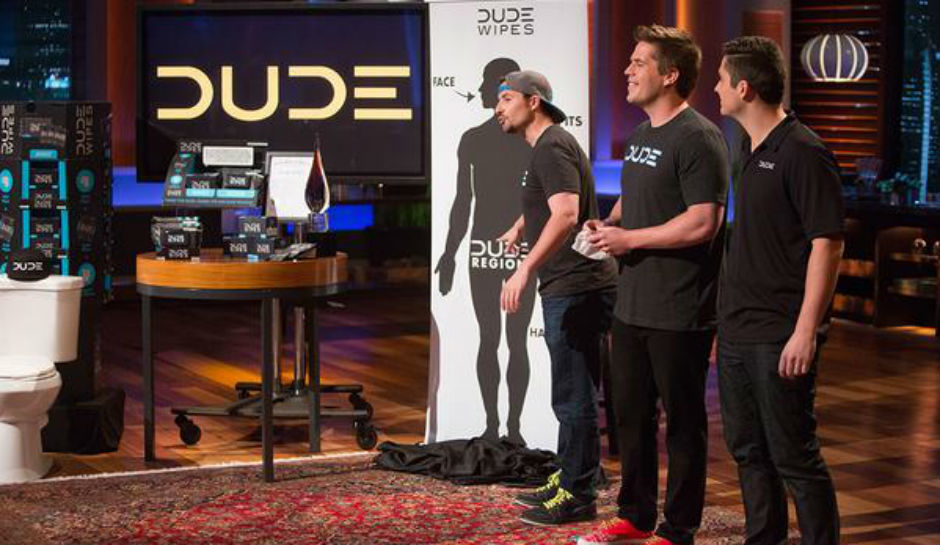 Pizza, poo, cookie brownies and dude butt wipes are on tap for this episode of Shark Tank featuring five sharks – Robert Herjavec, Lori Greiner, Barbara Corcoran, Kevin O’Leary and Mark Cuban – who were pitched by four different up-and-coming companies that were looking for an investment.

Here is the recap of the four pitches from tonight’s entrepreneurs:

Owner Tom Cucco is a pizza-loving entrepreneur from Brooklyn, New York. He created Table 87, which is a restaurant that offers coal oven pizza by the slice. He boasts that his restaurant is the first coal oven pizza shop in Brooklyn. In contrast to normal wood or gas burning ovens, Tom cooks his pizzas in ovens that burn at temperatures of 900 to 1100 degrees, which allows him to “flash cook” his pizza slices in minutes.

Tom is hoping to further expand his business by going nationwide and offering his pizzas in the frozen aisle of grocery stores. He has already garnered some success through this route, as he has sold $260,000 worth of frozen pizza.

Initially, Kevin points out how competitive the pizza business is. Not long after, Robert agrees with Kevin’s point and drops out.

The EZ Pee Z is a potty training device created by entrepreneur, Brian Kleinschmidt. The device attaches to the toilet like an ordinary toilet seat but has an additional flip-up component that quickly converts it into a child size seat. Brian hypes his product by telling the sharks that his product is as easy as, “one…two…Pee!”

Right off the bat, Kevin expresses hesitancy, as he believes that the product would pinch a child’s skin when they sit. In addition, Robert also expresses concern, as he doesn’t think people will actually want to go to the trouble of switching out their toilet seats.

Unfortunately, Mark and Barbara don’t have any interest in the seat and drop out. Afterwards, Robert says Brian became “too transparent” in his selling, and he also drops out. Lori is a bit kinder and tells him that his idea has some merit, but he needs some proof of concept. Both Lori and Kevin drop out.

Thus, Brian walks out with no deal.

Milk and Brookies is an e-commerce company that specializes in extra sweet treats, created by Jovon English, Marques Brooks and Naimah Harris. The name “Brookies” comes from their inventive way of blending cookies and brownies together. The three entrepreneurs are hoping to get a partner-shark and an investment, as they believe they have created the newest trend in food.

While all of the sharks enjoy the milk and brookies they are given to taste; they aren’t as impressed with the company’s sales of just $14,000. Additionally, none of the entrepreneurs are full-time in their business, which is always a cause of concern for the sharks.

Kevin and Mark are quick to drop out. Next, Robert drops out as he feels it is too early to invest. However, he does assure them they will be getting plenty of sales after their pitch airs on TV. Lori and Barbara also drop out.

Therefore, Jovon, Marques and Naimah walk out without a deal.

The last pitch of the night is from Jeff Klimkowski, Sean Riley and Ryan Meegan, the creators of Dude Products. The three men come into the tank with their company’s creation, Dude Wipes. Dude Wipes are flushable wipes that can be used to freshen up without the “girly” scents that most wipes have.

The company currently has sales of $300,000. Additionally, they also have a deal with Kroeger, where their wipes will be distributed to 1500-2200 stores nationwide. Therefore, they are projecting their sales to be $1.5 million by year-end. Ultimately, they are looking for an investment from the sharks to try and get their wipes in more big box stores.

Mark is the first one to take action, as he tells the guys of Dude Wipes that he isn’t a “wipes kind of guy” and he thinks that they are underestimating the capital they will need. Thus, Mark drops out, and Barbara quickly does the same. Herjavec is impressed with their business’ growth, so he offers them $300,000 for 20%. Kevin comes in as well and offers them the exact same offer as Herjavec. Lori likes the product, but she steps out because she doesn’t agree with the evaluation.

Crio is a drink designed to replace coffee and hot chocolate by having better health benefits and great taste. It was created by Eric Durtschi and Jon Fortheringham after Eric experimented with a previous drink known as “the drink of the Gods.” With experience and knowledge about this industry after years of traveling, Eric finally figured out a process to create the drink with a proprietary process. The drink is made with 100% cocoa beans and contains no fat, sugars, sodium, or cholesterol.

Eric and Jon were in their fourth year of business before coming on Shark Tank. They were already in 500 retailers and made over 1 million dollars while expecting massive growth. This was due to the positive feedback and heavy demand for healthy alternatives in the food market. Likely wanting help to continue the growth of their business, Eric and Jon applied to be on Shark Tank and were invited for Season Five.

Jon and Eric entered the Tank seeking 1 million for 10%. They began the pitch by selling the Sharks on the huge coffee market for their unique drink that has mix of chocolate and coffee with the use of cocoa beans. In addition, the drink is healthy by having only 10 calories per cup and provides gentle energy unlike coffee. They handed out samples to the Sharks as Mark mentioned “for 1 million dollars, it better be a hell of a treat.” All of the Sharks took a sip and, shockingly, most hated the taste! Mark immediately went out, knowing he couldn’t invest in something he didn’t like. Robert and Daymond were both on the same boat, with Daymond stating “it really is horrible” before they went out.

Kevin, not commenting on the taste, wanted to know why Jon and Eric valued the company at 10 million dollars. Jon and Eric mentioned they had 1.5 million in sales and they were expecting to be in over a thousand stores in the upcoming months. They also mentioned they hosted multiple demos with the product and about 9 out of 10 people liked the taste. Kevin brought up his common argument with food products being a commodity and that anyone can do it. Jon and Eric, however, mentioned they have a proprietary process that others couldn’t figure out how to do for nearly 150 years. This process was currently patent pending.  Barbara was interested in whom they were selling to and they mentioned they sold 60% of their product through stores who were reordering. Kevin, however, brought up another concern with the education process as people do not know the product it better for them than coffee and that the taste was the same, which a majority of the Sharks disagreed on.

Barbara, however, was the only Shark to mention she liked the taste and felt the other Sharks disliked it because they were expecting a taste like coffee. Mark disagreed, saying he was expecting a replacement for coffee and did not expect a certain taste. However, he felt the product just tasted like cocoa beans “mashed up with hot water put in.” Kevin went back to the valuation concern and Jon and Eric stated they would profit $150,000 with Mark responding “that is all that really matters.” Kevin, nevertheless, did not see how $150,000 in profit could relate to a 10 million valuation even with the proprietary process and expected growth. Because of this, Kevin went out. Barbara, although hesitant at first, ended up saying they were screwed which led to laughter from the Sharks after she went out. Barbara apologized, but mentioned she went out because of the valuation. Mark also apologized for the response he and the other Sharks gave for the initial taste and how they try to be supportive entrepreneurs. Yet Kevin, like always, felt Mark shouldn’t be supporting a company that came in with a 10 million valuation. Before Jon and Eric left, they mentioned they felt they would do a minimum of 10 million and really wanted a deal, but Kevin stated they would never get a deal by coming in and asking for what they did.

Despite the negative feedback, Crio has stayed very successful after Shark Tank. As expected, the Shark Tank effect helped them gain new customers and sales. They have gotten many more positive reviews on their online sale outlets such as Amazon after airing and have over 100,000 likes on Facebook as they constantly update their social media pages. They have also recently updated their packaging the names  of some of their skews, yet have kept the taste that most consumers love.

It would have been very tough for Eric and Jon to get a deal even if they came in with a lower valuation when a majority of the Sharks dislike your product. Nonetheless, the value on their company was indeed too high as a lot of it based on potential and projected sales. Outside of Mark, the Sharks rarely value a company on potential as they do not like to “pay for the future today.” If they really saw value in having a Shark as a partner and came for that over the capital, a reasonable valuation they could have come in with would be around 1.5-2 million because they should include the value they get from having a Shark along with the capital. This pitch, like many, teaches future entrepreneurs that valuing your company wrong can ruin your chances from the get-go.