While young stars Selena Gomez and Justin Bieber ended things over a year ago, you wouldn’t have thought so after the stunt Justin pulled. On Friday night, Justin and Selena were photographed together at the bar in the Montage Beverly Hills Hotel.

While there, Justin performed his hit song “Sorry” which he admitted was written about Selena on The Ellen DeGeneres Show, as well as another song. Shortly after, Justin went on to serenade Selena with a rendition of “My Girl.” Fortunately, a witness at the bar was able to capture a video and posted it to Instagram.

The woman who posted the video, Lindsey Cavanaugh, said that she briefly chatted with Justin. She went on to explain, “We asked what he was doing at [the] bar and [Justin] said [he was] meeting up with his ex.”

Prior to Justin’s impromptu performance, the young pop star was seen sitting on a couch with Selena conversing. Afterwards, the two slow danced in front of the piano, while Lionel Ritchie’s “Easy” was playing.

While witnesses claim that the two looked like they were glowing in love, they also confirmed that Justin and Selena went their separate ways after leaving the hotel bar. 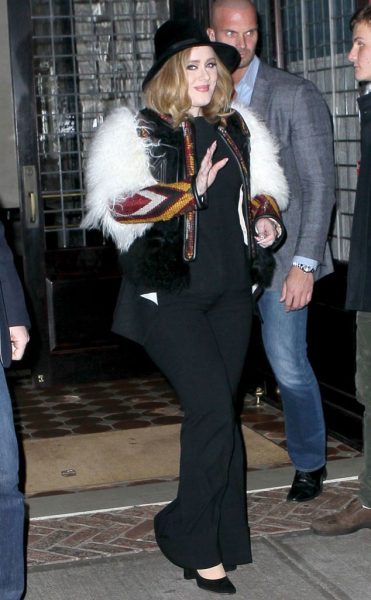 Although both Adele and the cast from The Hunger Games are busy promoting their latest projects, they were still able to find time to hang out at New York’s Waverly Inn Restaurant on Friday Night.

Currently, Adele is promoting her already hugely successful album, 25, while Liam, Josh and Jennifer are finishing off their press tour for their final Hunger Games movie, Mockingjay Part II. Coincidentally, both the album and the movie were released on Friday (November 20th).

The stars all have some mutual ties, as Adele filmed promotion for her upcoming SNL stint with host Bradley Cooper, who has starred in several movies with Lawrence. In addition, Adele performed at the Radio City Music Hall on Tuesday, where Jennifer was also seen amongst many other big name celebrities.

In addition, Jennifer has previously confessed to being star struck when encountering the soulful singer at the 2013 Golden Globes. Jennifer told host Jimmy Kimmel, “Adele was at the table, it was the next table over, and I had such a high fever and I felt like I couldn’t move and I saw Adele and there was nobody in the way and she was sitting at the table by herself and I was sitting with my dad. And I just reached my arm out and went ‘Uhh…’ And my dad was like, ‘Jen, what’s the matter?’ ‘It’s Adele. It’s Adele, right there.’”

Hopefully, this encounter went a lot better than the last time Jennifer was in close vicinity of the star. Nevertheless, definitely a star-studded dinner date!