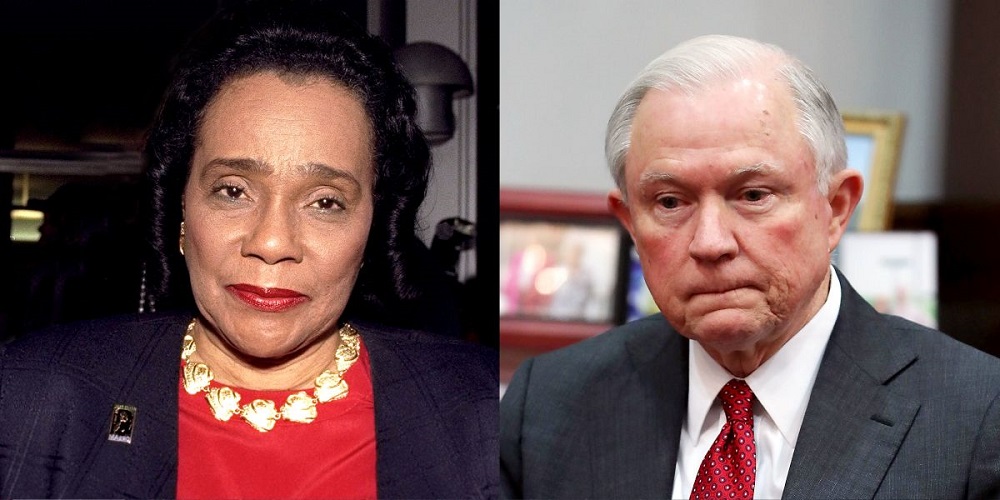 The Republicans did what they do best when Sen. Elizabeth Warren was reading past statements against attorney general nominee Jeff Session from such people as the late Senator Edward Kennedy and Coretta Scott King. They pulled out a very arcane rule (Rule 19) which struck down her words for impugning the Alabama senator’s character.

What was interesting about this move is that it silences Warren for good when it comes to Jeff Sessions during the nomination process. It’s a law, but it’s definitely is a chilling one that can silence people like this.

This is unreal. Senate Republicans have ruled that any Democrat that criticizes Sessions' record will be stripped of the right to speak. https://t.co/At5fqUkVWF

You can read the full letter just below.

Senate Majority Leader Mitch McConnell interrupted Warren to invoke the rule even though he didn’t do this when Sen. Ted Cruz called him a liar in 2015.

“The senator has impugned the motives and conduct of our colleague from Alabama,” McConnell said, then setting up a series of roll-call votes on Warren’s conduct.

It was the latest clash in the increasingly hostile debate over confirming President Donald Trump‘s Cabinet, during which Democrats have accused Republicans of trying to force through nominees without proper vetting. Democrats, unable to stop the confirmations that require simple majorities, have countered by using extreme delay tactics that have dragged out the process longer than any in history for a new president’s Cabinet.

I will not be silent while the Republicans rubber stamp an AG who will never stand up to the @POTUS when he breaks the law.

The Democratic moves, including boycotting committee room votes on nominees last week and a round-the-clock debate Monday night before Tuesday’s confirmation of Education Secretary Betsy DeVos, reached a boiling point during the debate over Sessions — which Democrats are vowing to continue overnight.

In setting up the votes to rebuke Warren, McConnell specifically cited portions of a letter that King, the widow of slain civil rights leader Martin Luther King Jr., wrote to the Senate Judiciary Committee in opposition to Sessions’s 1986 nomination to be a federal judge.

“Mr. Sessions has used the awesome power of his office to chill the free exercise of the vote by black citizens,” King wrote, referencing controversial prosecutions at the time that Sessions served as the U.S. attorney for Alabama. Earlier, Warren read from the 1986 statement of Kennedy, a senior member of the Judiciary Committee who led the opposition then against Sessions, including the Massachusetts Democrat’s concluding line: “He is, I believe, a disgrace to the Justice Department and he should withdraw his nomination and resign his position.”

The Senate voted, 49 to 43, strictly on party lines, to uphold the ruling that Warren violated rules of debate. Pursuant to those rules, Warren is now forbidden from speaking during the remainder of the debate on the nomination of Sessions.

“I am surprised that the words of Coretta Scott King are not suitable for debate in the United States Senate,” Warren said after McConnell’s motion.

Sen. Steve Daines, R-Mont., a freshman who was presiding over the Senate at the time, issued a warning to Warren at that point, singling out Kennedy’s “disgrace” comment, and 25 minutes later McConnell came to the floor and set in motion the battle, citing the comments in the King letter as crossing the line.

Warren’s speech ended with a simple admonition from Daines: “The senator will take her seat.”

“Sen. Warren was giving a lengthy speech. She had appeared to violate the rule. She was warned. She was given an explanation,” he said. “Nevertheless, she persisted.”

Other Democrats later came to her defense and tried to have King’s letter placed into the Senate record. But Republican senators quickly objected. They did so again when Sen. Kamala Harris, D-Calif., the chamber’s only African-American woman, asked that Warren be allowed to resume participation in the debate.

Warren, a liberal firebrand with a devoted national following whom some activists want to run for president in 2020, quickly took to social media and the airwaves to attack McConnell and Republicans for shutting down her speech.

In a brief telephone interview with MSNBC’s “The Rachel Maddow Show,” a program watched loyally by many Warren devotees, she explained that “I’ve been red-carded on Sen. Sessions, I’m out of the game on the Senate floor. I don’t get to speak at all.”

I am speaking later tonight. I will be talking about Sessions' record. With gusto. Go ahead and rule me out of order. https://t.co/CL30xHQbM2

At least one other Democrat, Sen. Christopher Murphy (Conn.), hinted that he might try to pick up where Warren left off at some point overnight, saying on Twitter, “Go ahead and rule me out of order.”