On this week’s episode of Real Housewives of Potomac “Fifty Sense,” Charrisse pulls out all of the stops for her birthday bash. Meanwhile, Karen is hit with the reality of having an empty nest and Robyn talks to her ex, Juan, about the possibility of him taking a job out-of-state. In addition, Ashley’s husband Michael gets into trouble when he gets too touchy on the dance floor.

The episode kicks off with Robyn and Gizelle indulging while at lunch together. The ladies seem to thoroughly enjoy each other’s company and Robyn even opts to open up to Gizelle about her relationship with her ex, Juan. Robyn confesses that she is scared to let down her guard with Juan, as he cheated on her when they were married. She then goes on to claim that she would consider getting back with him, but she wouldn’t want to get remarried. Gizelle is shocked to hear about Robyn’s relationship with Juan, especially when she finds out that Robyn’s kids aren’t even fully aware of their parents’ divorce.

Meanwhile at Karen’s house, Karen and her husband get nostalgic as they go through some of their daughter Rayvin’s childhood memorabilia. The couple are planning a cookout as a celebratory sendoff for Rayvin heading to college. Later on, Karen’s husband Ray brings up the confrontation Karen had with Ashley at their “O Gala Cocktail Party.” Karen goes on to joke that Ashley is lucky her alter ego “Chaka” didn’t make an appearance, as according to Karen “Chaka” isn’t afraid to “slap a b****.”

Katie meets up with her friend/neighbour T. Initially she talks about her relationship with Andrew, who Katie claims is getting closer to finally getting down on one knee. She then begins bashing Karen’s Gala (which was featured in last week’s episode of RHOP). Katie tells her friend that she attends and lots of galas, and she was thoroughly unimpressed with Karen’s. T tells Katie that she should help Karen. However, I very much doubt that Karen would be willing to accept help from Katie considering she thought her party was a complete success.

Over on the other side of town, Ashley is seen having lunch with her mom. They begin discussing her mother’s financial situation, as she recently declared bankruptcy. Ashley explains that she and Michael are currently looking to buy a home for her mom. She uses this demonstration of generosity to point out how wrong Karen is for labelling her a bad role model. 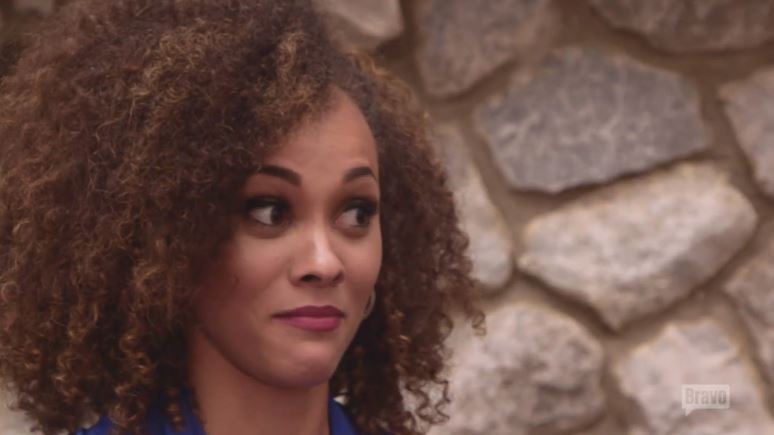 Finally, the day of Rayvin’s send-off party arrives, and Karen is clearly having a hard time coming to terms with the fact that her daughter is heading off to college. Thus, when Ray forgets the balloons and hires a bartender behind her back, Karen has a total freakout and winds up locking herself away in her room. However, in the end, the party ends up being a success, even though Karen was in tears throughout the night. Aunt Dot explains that while Karen may seem over-the-top emotional, she was just as bad when her son Brandon left for school.

Later in the episode, Charrisse drops by Gizelle’s house to talk about her upcoming birthday bash. Charrisse explains that her ex Eddie will not be attending the party. However, he is footing the bill – which happens to be a whopping $80,000.

Meanwhile, Robyn goes out for a kids-free lunch with Juan. Here Juan reveals that he did not land the out-of-state job, and, therefore, they do not need to worry about an impending move anymore. Robyn admits that she is relieved, although she is sad that Juan wasn’t able to get the job.

Lastly, Charrisse’s party finally arrives, and the guests are rightfully impressed with the lavish event. All of the ladies, for the most part, seem to have a blast. However, there is some obvious tension between Karen and Ashley. Ashley confides in the other ladies after she realizes that Karen is completely ignoring her. She explains that she feels she misunderstood Karen and doesn’t think the whole situation needed to turn into the big thing it did.

Inevitably Ashley’s confession gets back to Karen (via Gizelle). Karen tells Gizelle that she doesn’t want anything to do with Ashley. After Gizelle relays this message to Ashley, Ashley can’t help but confront Karen, who totally blows up on her once again.

Nonetheless, Charrisse provides the guests with ample entertainment, including her own attempt at a rap performance. While this is all going on, Andrew reveals that Ashley’s husband Michael grabbed his backside while on the dance floor. Gizelle, who happened to see the incident, proceeds to tell all of the other women about it. Ashley right away defends Michael, but conflict arises when Robyn suggests that perhaps its a “white guy thing.” This prompts a drama-filled discussion about race, in which Katie ends up calling Robyn and Gizelle the most racially obsessed people she’s ever met.

Afterwards, Ashley ends up talking to Michael about the whole Andrew situation. Although Michael denies it, he finds the whole thing pretty humorous. Unfortunately, the other party-goers don’t view the whole thing in the same playful light.

You can catch more Real Housewives of Potomac when it returns next Sunday on Bravo.

Andrew takes a weeklong trip to Scotland sans Katie. Ashley tries to talk Michael into having children with her. In addition, Gizelle hosts a lunch in an attempt to mend some of the rocky relationships between the women.