Although Eileen Davidson has proven herself time and time again to be the bland cast member on the Real Housewives of Beverly Hills, Bravo is clearly not giving up on her, as this week’s episode shot a big spotlight on the soap opera actress and a secret from her past. In the 8th episode of the season “Going Deep,” The Real Housewives of Beverly Hills continue with their attempt to temporarily let Bethenny Frankel into their group while trying to also manage the drama that is stirring up within the core cast.

The episode kicks off with Bethenny hosting a book signing in Kyle’s pop-up store in the Hamptons. Unfortunately, due to safety and traffic concerns, Kyle confesses to Bethenny that she wasn’t allowed to make the event very public, but still invited some “VIP” guests to come down to the shop – which of course includes Eileen, Lisa R., Lisa V. and Ken (as well as little Giggy).

Once the event gets underway, a few of the women (excluding Kyle) begin talking about Kim and her troubles. Lisa R. tells Bethenny that she somewhat feels responsible for Kim’s downward spiral, as they had a big falling out prior. Bethenny is thoroughly enjoying hearing the girls’ gossip about their previous drama with Kim and repeatedly encourages them to spill more about their past interactions with her. Meanwhile, Kyle is catching up with her aunt, who asks about Kim. Kyle proceeds to inform her aunt that she is not on speaking terms with both her sisters, Kathy and Kim.

Unfortunately, the two conversations collide when Kyle sneaks up behind Bethenny right as she is stating that she feels bad for Kyle and how ashamed she seems about her sister. Unsurprisingly, Kyle is not happy to hear that all of the ladies have been talking about her family troubles once again. Thus, she quickly changes the subject and tries to lighten the mood by announcing they are all going to “party in the Hamptons!” 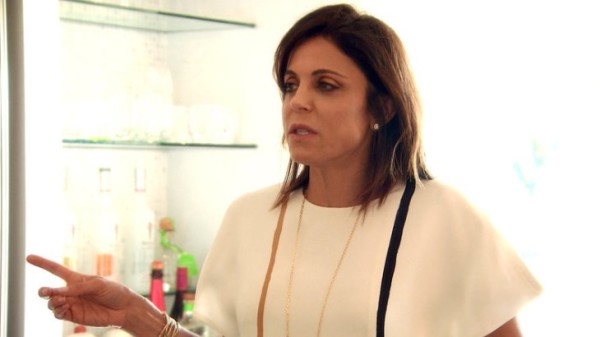 Later that evening, all of the girls (as well as Ken and Giggy) get together for a dinner. Right off the bat, Lisa V and Eileen get into it, as Lisa continues not to understand why Eileen was upset that she wanted to know about her previous affair.

Fortunately, Erika comes in and changes the subject by blurting out that everyone needs to have another drink. However, to Kyle’s dismay, the dinner party’s conversation transitions once again into being all about Kim. Erika shares that she had a cousin who was “troubled” and, therefore, understands how Kyle is feeling. Lisa V. goes on to ask Kyle what she can do to help herself feel less “tortured” from her family issues. Kyle tries to make it clear that it is a personal issue. However, this hasn’t seemed to stop the women from bringing it up in the past and probably won’t in the future.

As the dinner continues, the group begins discussing what “keeps [them] up at night.” Lisa V. has one of her queen bee moments when she confesses that she doesn’t have any problems that keep her up at night – although Kyle believes that Lisa is just cold as stone and is unable to dig deep within her true underlying emotions. Shortly after, Eileen decides to open up to the group and reveals that she has been in “extremely physically abusive relationships” in the past. Immediately Eileen gets emotional as she explains, “no one would think someone like me would be in a situation like that.” While all of the other women are comforting and praising her bravery, Lisa V. continued to look unmoved by her confession and even explains to the one-on-one camera that she doesn’t understand why Eileen would be so open about her abusive relationships considering she was so guarded about her “love affair.” As much as I love Lisa V., I have to admit she sometimes does seem to lack emotional depth.

The next day Erika (private) jets off to Ohio to pick up Yolanda, who just got out of the hospital after her silicon removal surgery (from her old leaking breast implants). Yolanda reveals to Erika that her doctor said that it was the worst case she has ever seen, which is saying something considering her doctor has done about 9000 similar procedures. Yolanda looks thoroughly satisfied, as she explains that she feels very vindicated and now actually feels pity for those who questioned her illness.

Back in Beverly Hills, Kyle invites Faye Resnick over to help her convert her personal gym into a closet. Of course, Faye also brings up the whole Kim situation. However, Kyle admits she feels a lot better talking to Faye about her personal issues as she isn’t just curious and looking for the parts of the story that TMZ failed to report (i.e. what all the other women are constantly doing).

Shortly after all of the ladies head over to Lisa V.’s restaurant “Pump,” where Lisa is holding an event to kick off the “Hero Dog Awards.” Apparently, she throws the celebration annually, and it is to honor special dogs who can “detect cancer” and all sorts of conditions.

At the party, Lisa R. runs into an old friend named Kathryn. The ladies begin talking about O.J. Simpson because apparently Kathryn was married to his former best friend, Marcus for over eight years. Eileen, who is also listening in to the convo, blurts out that she actually went on a few dates with Marcus – which definitely earned her a few awkward glances from Lisa and Kathryn.

Following this,, Kyle catches wind that Kathryn is at the event. Kyle is a bit thrown off, as she explains that Faye (one of her best friends and current closet designer) wrote a book claiming that Marcus Allen had an affair with Nicole Brown while he was married to Kathryn, and this inevitably was what triggered O.J.’s alleged attack.

After, Lisa R., Lisa V., Kyle, Eileen, Erika and Kathryn all head over to “The District” to get some cold, alcoholic beverages as their early afternoon refreshments. Not too long into their gathering, Kyle feels the need to bring up Faye to Kathryn. However, Kathryn claims she doesn’t know her – although she admits in confessional that she does know who she is and doesn’t think very highly of her at all. Kyle picks up on Kathryn’s abruptness and explains in confessional that Kathryn’s answer was suspiciously aggressive – thus concluding that Kathryn most likely does know Faye to some degree.

Lisa Vanderpump is once again looking to expand her brand, as she hunts down a new location for yet another restaurant.

You can catch the next episode of Real Housewives of Beverly Hills when it returns next Tuesday, January 26 on Bravo.