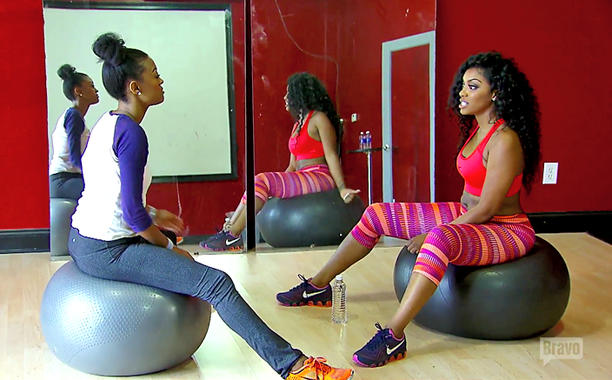 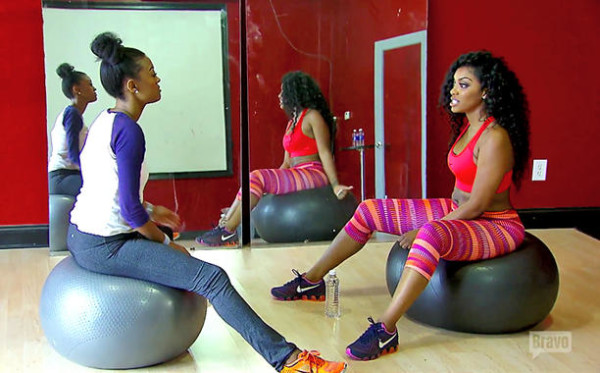 On “The Real Housewives of Atlanta,” it’s Momma Joyce to the rescue and family drama for Kenya Moore and Porsha Stewart.

While Kandi and her mother go baby shopping, they have the conversation about Phaedra Parks and Kandi’s relationship. From Momma Joyce’s perspective, she thought they were good, but after her daughter tells her what happened at her video screening party, she feels she should pay a visit to Phaedra herself. Kandi tells her that’s not needed, but you know how mommas are.

So she pays Phaedra that visit and doesn’t hold back concerning the purpose of her stopping by. “I was wondering what happened between you and Kandi?” Phaedra keeps calm and polite when speaking to Ms. Joyce as she doesn’t go into any real details from what we see. She doesn’t mention how she felt like Kandi was not there for her when Apollo was indicted nor does she mention how Todd storing Apollo’s things pissed her off either. Momma Joyce brings up the whole altercation with DonJuan as well, and Phaedra brushes that off as a misunderstanding. She hears what the lawyer has to say but further expresses how “Momma Bear” doesn’t want anything to upset her baby. She ends the conversation on a high note by asking her to help out with Kandi’s baby shower.

Then there is Kenya, who finally takes the trip to Detroit to have the family reunion she feels will provide her the closure she needs. A big part of her visit home is to give reconciliation with her mother one last try. While she is nervous about seeing her, she is ready to get it out of the way.

Her dad and stepmother show up to support her as well as Brandon and her mother’s sister. Kenya has had a strained relationship with her father’s wife, but everyone just wants to put things in the past and move forward. They take a bus to Pat’s, Kenya’s mom’s house and as they do, her dad reveals that her mother didn’t claim Kenya because her father said he didn’t want any illegitimate children in his house.

As they pull up to her home, Kenya makes her way to the door. But she doesn’t get the answer she was hoping to get. Her dad tells her to leave it alone as Pat has been ignoring Kenya since she was 18 months old. He joins his daughter to walk her back to the bus, really showing some daddy love here. While she is upset that her mother, who was home, didn’t answer the door, she now accepts that the woman who gave her life is in her past.

Cynthia Bailey asks her daughter for some help with getting ready for a surprise trip that Peter has planned for them. She hasn’t tried to hide their issues from Noelle because she wants her to know the importance of marriage and to understand you don’t just walk away when things get hard. They “really need this time to reconnect alone,” Cynthia says, and she is excited.

Porsha works out with her trainer DP and her sister, Lauren, shows up. The Dish Nation host continues her super inconsiderate demands of her sister during her pregnancy, and I think it has everything to do with jealousy. She gets on her about missing a package because Lauren wasn’t there to get it but her sister isn’t having it. Porsha keeps threatening to take her job, etc. and Lauren brings to her attention that there is no one she can trust who will not steal her money, among other things. Then Porsha throws in Lauren’s face that everything they have is because of her sacrifice, and that is the reason she flies first class, and Lauren flies coach. Are you kidding me right now? Porsha you are really showing your true colors.

After speaking to Phaedra, who tells her to chill because her sister is pregnant, Porsha humbles herself and goes to Lauren. Her goal? To talk about what is happening between them. The sisters share how they feel about the other; Porsha not being the one to have the baby and Lauren not being appreciated enough. Hopefully, they can move forward with a better understanding of their work and personal relationships.

In the end, Kenya embraces the family that does come to the reunion and accepts her relationship or lack thereof with her mother for what it is. It is refreshing to see her in this light because the storyline shows some much-needed vulnerability.

Next week, all the gushy feelings are out the window as NeNe Leakes is back in action. That should be very entertaining to say the least.