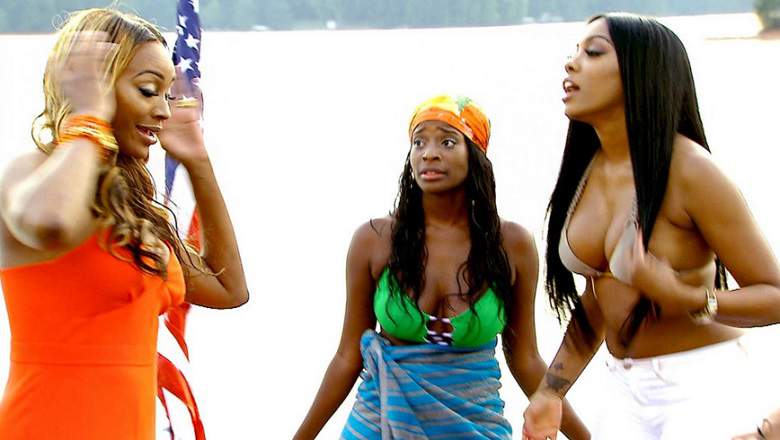 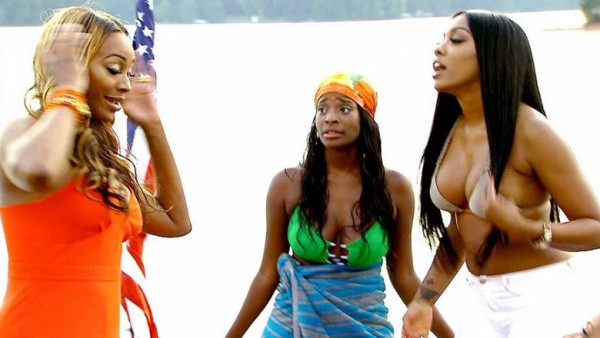 “The Real Housewives of Atlanta” finally gave us some real drama this week. Well, to be truthful, it alluded to some real drama. We finally got to see the much talked about “fight” between Porsha and Cynthia and to say that it was disappointing is an understatement.

Yes, I say disappointing because while I am not about women fighting on TV, if you are going to advertise it and let them do it, let it be good (that’s ratched, huh). Anyway, here is what went down and led up to the altercation.

Kenya throws a party on a yacht for her friend Cynthia who is obviously going through a tough time in her marriage. We first see her walking to Sharee’s house. She figures since she’s actually there, she might as well drop in to say hi. She sees Chateau Sharee and that thing is beautiful. I really do hope she gets’s it finished (which may be the reason she is back on the show) because that thing is gorgeous. While Kenya invites her to the yacht party, the two make a bet on who’s house will be finished first. Or rather, who will obtain a certificate of occupancy first. The loser has to clean the other’s house.

Kim Fields has a play date with Phaedra and her kids, and it turns into a real moment for her. Phaedra asks her what she does for fun, or what she does for her and everything Kim says centers around her husband, kids or career. This self-revelation saddens her, and she cries as Phaedra encourages her to do things for her. She tells her it’s alright they will get back to their selves together and Kim feels like a friendship with the entertainment lawyer is a great start for her.

Phaedra is just the friend of the night as she also helps Porsha pick out some sexy face-time attire that she can wear for her next online session with Duke. The only thing is that the NFL player never gets to see what she got because he “stands her up.” Porsha calls Phaedra who tells her obviously the thrill is gone and it’s time to move on because “life is too short to be unhappy.” I hear you on that Phae Phae.

The big event of the night is Kenya’s yacht party and everyone attends, accept Phaedra and we aren’t told why she’s not there. The ladies are picked up in a Mercedes van that shuttles them to the spot. It is a beautiful day and everyone looks forward to letting loose and having a good time. Especially Cynthia, who the trip is for and who also has a little too much to drink, which leads to the run in with Porsha.

And let’s talk about what happened. Tensions were already high because Porsha invited Shamea, who if you remember, shaded the hell out of Kenya at her event by asking if her products were for drinking since they “smell like water.” Kenya asks why she’s there and tells Porsha that it was an invite-only affair and not “open” as the radio host suggests. That’s the first thing. They get really drunk as buff men serve them COCK… tails (their joke). And it is clear that Cynthia, in particular, is super lit.

As Kenya speaks to the women about what they are all there for she mentions how Shamea tried to come for her at her product launch, and that’s when it all heats up. Shamea, who clearly is out of line, continues to insult her, calling her “Miss America” and Kenya is done. She wants her off the boat and goes to the captain to have him escort her to shore. While she does that, Cynthia seeks to help her friend and Porsha says, “yes go see about her best friend” to which Cyn says that Kenya has a lot of “best friends” that don’t always act like friends or something like that. Porsha says, “whatever bitch” clearly joking, but Cynthia doesn’t take it that way.

The model gets all in Porsha’s face. She demands that she respect her by not calling her out of her name. Porsha is floored as she is just playing and asks Cynthia, “are you serious right now?” They go back and forth and Kenya comes over to break it up. Kim takes Cynthia to the other side of the boat and Kenya and Sheree tell Kenya to apologize. But she doesn’t feel she did anything wrong, however, since she doesn’t want there to be a misunderstanding, she goes to Cynthia who does not want to hear what she has to say. In fact, she get’s pretty belligerent with her which prompts Porsha to call her “fake as fuck.” The next thing we see are Kenya and them on the other side of the boat looking in their direction asking, “are they fighting” and running to them.

Now, for the record here, Porsha is being the bigger person in this situation, and it is super petty and embarrassing for Cynthia to go off on her. She is too drunk, and it obviously gets to her. Porsha even tries to apologize to her that she took it the wrong way, and Cynthia is just too out of it to think straightly. Thus, the situation is her fault, and she is the one in the wrong.

We have to wait until next week to see what happened but from what they showed us, Porsha is the one who had to be restrained. This time, it wasn’t her being kept away from Kenya Moore but Cynthia Baily. Who’s next for this girl, Kandi?